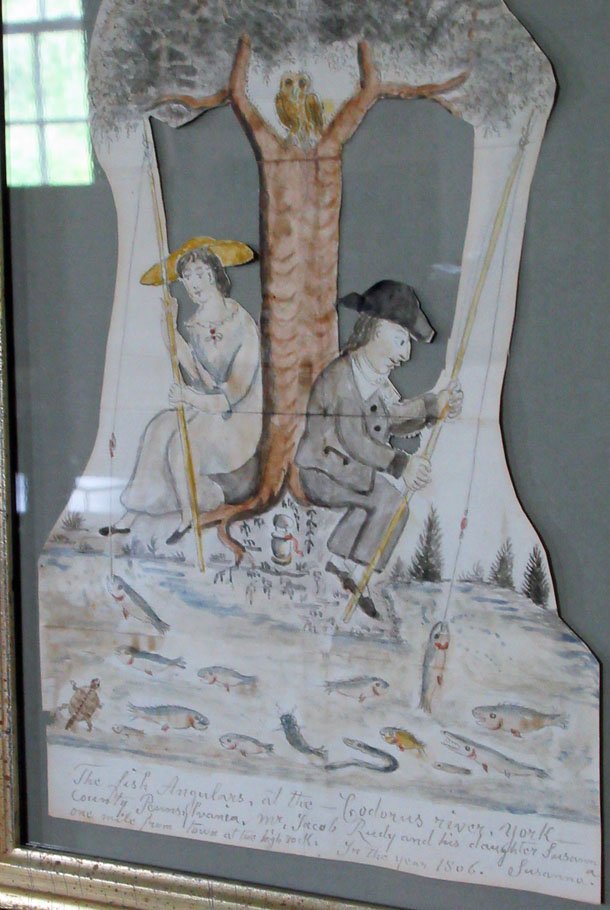 See above and below for this interesting Lewis Miller drawing that was recently shared with me by a private collector. Miller’s caption reads: “The fish Angulars, at the—Codorus river, York County, Pennsylvania, Mr. Jacob Rudy and his daughter Susanna, one mile from town at the high rock. In the year 1806.”

Miller very probably did this drawing after he left York to live with relatives in Christiansburg, Virginia. Up until he died in 1882 he was doing a lot of drawings of his remembrances of York County, many of which he sent back to old friends and relatives in York. They often sent him funds in return to thank him, which he very much appreciated as he grew older. Half of the volume Lewis Miller’s People, compiled and edited by Lila Fourhman-Shaull and me a few years ago and published by the York County Heritage Trust (now the York County History Center), was drawn in an 1875-76 catalog for the Montgomery [Virginia] Female College.

As you can see by the reverse, this drawing was drawn on the back of an ad for the Duval House, Salem, Roanoke County, Va., G.W.B. Hale & Co., Proprietors. You can read enough of the ad, dated April 1st, 1877, to learn that Duval House was near a resort with “ONE CHALYBEATE AND TWO SULPHUR SPRINGS.” (Chalybeate designates a mineral spring with iron salts.) Salem is about 25 miles from Miller’s home in Christiansburg. There were many mineral springs in that area, including Yellow Sulphur Springs near Christiansburg. It was quite fashionable to visit springs and bathe in their therapeutic waters in the 19th century. 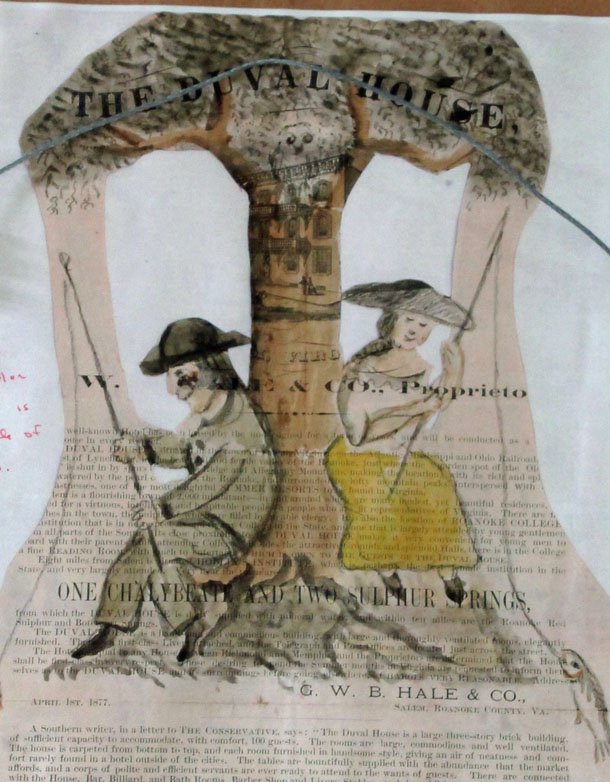 A bonus with this drawing is that a similar scene is drawn on the reverse, complete with the owl in the fork of the tree. The reverse drawing isn’t as finely detailed, but it still looks like it was drawn by Miller’s hand. You can see that drawing is trimmed to be partly in silhouette. This isn’t common for Lewis Miller drawings, but others do exist. It must have been trimmed before the reverse was done, or the outlines would not have come out correctly.

The majority of known Lewis Miller drawings are in museums. The largest collection is at the York County History Center, but others, such as New-York Historical Society, Virginia Historical Society, Henry Ford Museum, the Abby Aldrich Rockefeller Folk Art Museum in Williamsburg and the Montgomery [Virginia] Museum and Lewis Miller Regional Art Center have some originals. There are others, such as this one, in private collections. If you happen to own any original Lewis Miller drawings, please take photos and email them to me at ycpa89@msn.com or jlloyd@yorkhistorycenter.org. Having images for the York County History Center files is important for continued study of Miller and his work. I keep all ownership strictly confidential.