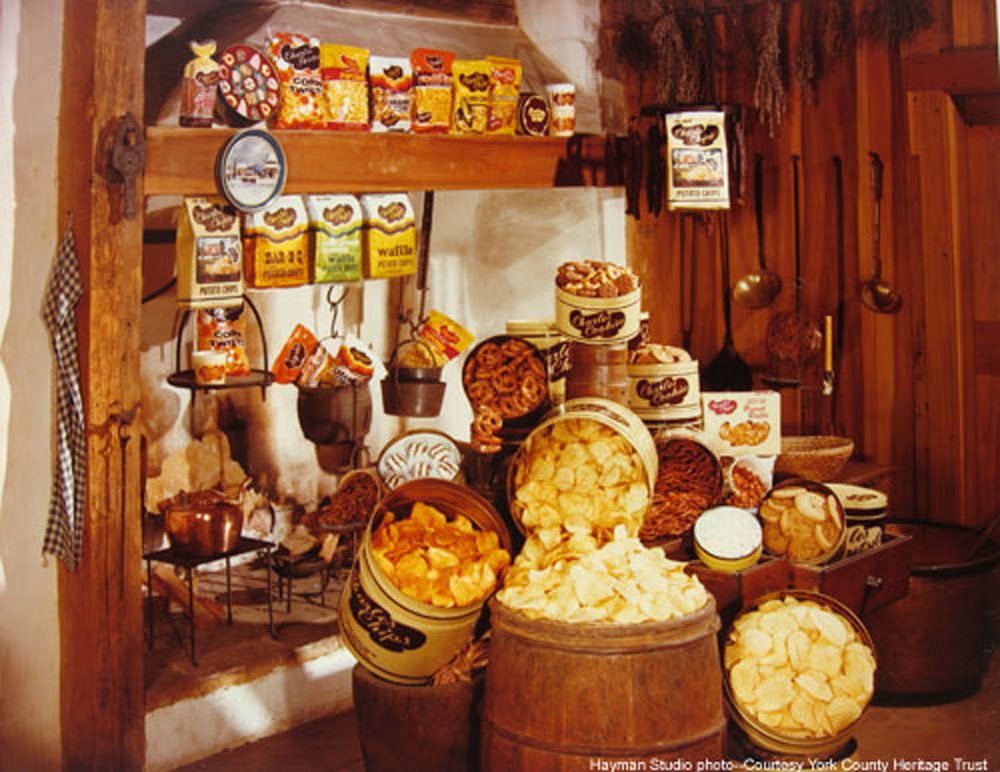 Charles Chips at the Golden Plough Tavern
You can’t eat just one potato chip, right? Apparently you can’t just do one blog post on potato chips either. At least I can’t. This is my 13th post on chips that are/were made and/or loved in York County.
People seem to like to read about chips and share their memories. In the year and a half since I did my first potato chip post, I have received more comments on those posts than any others, and my chip posts regularly get the most hits. Charles Chips, a brand that hailed from just across the Susquehanna River in Lancaster County, garnered the most interest. They were mightily loved in York County and, eventually, across the nation.
I just found an unattributed article in the files at York County Heritage Trust as well as the photo above. I don’t think they are related, but I wanted to share them with all you Charles Chip fans. The article is from 1992, when the company was going strong and celebrating their 50th anniversary. The photo, an advertising shot by Hayman Studio of York, may be earlier. The photo was taken at the Golden Plough Tavern, part of York County Heritage Trust’s Colonial Complex on West Market Street–a nice homey background for a selection of goodies.
What was the Charles Chips company focusing on for their 50th anniversary?

The cans. By that time the potato chips, pretzels, cheese twists, popcorn, cookies and other Charles Chips products were being enjoyed around the country. In fact, they were shipped around the world to American troops. That’s what pinpointed the usefulness of the tins.
The article says that within days of airlifting chips and pretzels in the distinctive Charles Chips cans to troops during the Gulf War, the company was getting letters telling how much they liked the cans as well as the contents. They were using the tins to protect cameras, small combat arms, tape players and medical equipment as they moved across the desert.
Since only a fraction of the millions of tins distributed had been returned to the company for reuse during its first 50 years, the company decided to ask the public how they were using the cans, inviting them to send along photos. Early responses included storing pet food, plants, stamps, beads and Christmas ornaments, as well as being used in various games. I’m willing to bet that some of you are still using those tins for all kinds of storage.
If any company ever resumes making Charles Chips again, I hope for two things–that they taste as good, and that you can buy them in cans. They stayed fresh, and you could grab them by the delicious handful.
Scroll down and click on potato chips on the category list on the right hand side of this page to see my posts on the many York County chip companies of the past and present.
Click here a list of all Universal York posts. You can search for keywords in the titles by using “Find on this Page.”
You can also search with Goggle, Bing or other search engines by typing universal york and a subject into the search box.