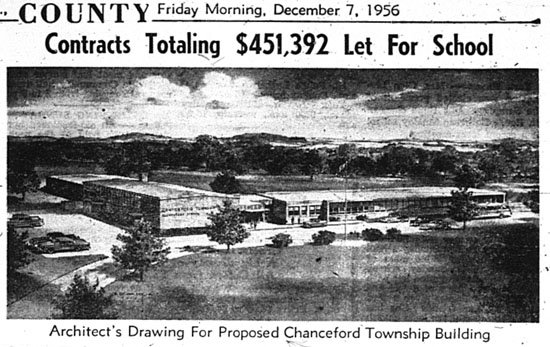 As often happens, while looking for something else in the newspaper microfilms at the York County Heritage Trust Library/Archives, I came across a December 1956 Gazette and Daily article with an architectural perspective of the planned Chanceford elementary school at the Brogue.

The construction would bring about the closing of some of the last one-room schools in the county. The article reads:

The brick building will be erected on a tract of land of between eight and nine acres at The Brogue opposite the site of the present Brogue school as a replacement for 14 outmoded one-room school buildings.

C.M. Gross, Dover, received the general contact on a low bid of $304,725.00. Bortner Brothers, York, will install the plumbing at a cost of $49,132. The heating system will be installed for $68,385 by Diller Weirman, Hanover. Miller Brothers, Mt. Wolf, have received the contract for the installation of the electrical system at a cost of $29,150.

The project will be financed through a loan of $560,000 made through Ira Haupt and company, New York City, at an interest rate of 4.449 percent. The loan made on a basic 40-year contract will be paid through annual rentals of $35,000.

The building designed by Buchart Engineers, Inc., York architects, will include an all-purpose room with state, a kitchen, faculty, music and storage rooms in addition to the 16 classrooms which are designed to accommodate 480 pupils. Construction is expected to be completed by the end of December 1957.

I attended two of those schools, Glen Allen (also known as Hake’s) and Brogue before my family moved to Windsor Township, which had consolidated their schools into a new building about 1950.

The Red Lion Area school district, of which both Chanceford and Windsor Townships are a part have built more new schools over the years, opening and closing them as development caused population shifts. Chanceford was closed at the end of the 2009 school year. According to a York Dispatch article last year, the Red Lion Area School District had decided to sell the school after having rented it out for a few years. It is currently listed on a local commercial realty website.