Call for papers for the Journal of York County Heritage

The 2020 Journal of York County Heritage is here!  Since this year marks the 100th anniversary of universal Woman Suffrage throughout the entire United States, the majority of articles in this year’s issue center around women.  If you haven’t received your own copy of this year’s journal as a benefit 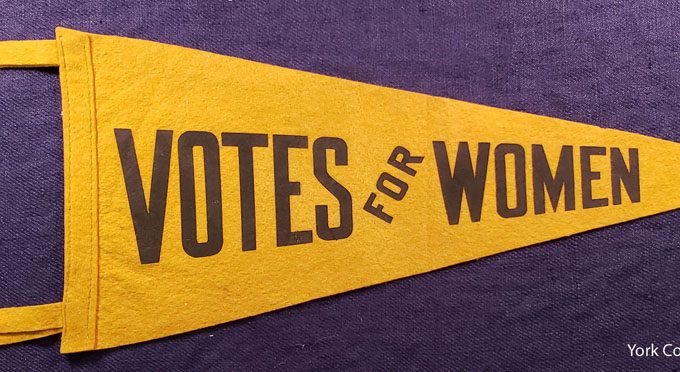 We will mark the 100th anniversary of the passage of the 19th Amendment to the U.S. Constitution this June.  Before that women and men all over the country had spent years trying to get individual states to allow women to vote.  By 1914, woman suffrage was in effect in only

We are coming up on the 100th anniversary of national woman suffrage in 2020. Before the passage and ratification of the 19th amendment of the United States Constitution, which granted all American women the right to vote, women could vote in relatively few states. While working toward a national constitutional amendment, women

York women found it took time to be fashionable

There is currently an interesting mini-exhibit in the entrance hall of the York County History Center museum at 250 East Market Street. Even though I sometimes mentally live in the 19th century, an exhibit like this reminds me to be thankful that I physically live in the 21st century. The

We probably have all known local people who bravely served in the military during World War II. During that time the home front was also very busy. I have written columns and blog posts about the York Plan, the system of cooperatively switching our factories from peacetime to wartime production

In 2006 York Daily Record columnist Jim Hubley wrote that the temperance crusader Carrie Nation was signed as top attraction at Hanover Fair in Sept 1902, speaking between horse races. She was also scheduled to give a lecture, Why I Smash, at the Hanover Opera House. Only 12 people showed

Spring view of Smith tree Lucy Neville Mitchell was born in 1872 at Charleston, S.C. In 1902 she married Stephen Fahs Smith, an executive in the S. Morgan Smith Company founded by his father. Mrs. Smith was very interested in genealogy, tracing descent from British royalty. The Smith estate in

Not just feather trim. Hats seem to be making somewhat of a comeback, but I can’t imagine them ever coming close to their popularity in the 19th and early 20th centuries. York County Heritage Trust has just opened an exhibit featuring original hats from the past. Photos of some of

Huggy and the Soldiers–York Mayor Cracks Down

York Mayor Ephraim Hugentugler had his hands full in the fall of 1917. He hauled many locals into his police court for furnishing liquor to soldiers stationed at the temporary training camp at Gettysburg. The soldiers also got themselves arrested for drunkenness or being disorderly, a charge that sometimes meant

York Mayor Tells Wife She Should Have Hit Husband Harder

Ninety years ago York Mayor Hugentugler presided over a frequently lively police court: One case involved a “near murder” with a hatchet on the 500 block of Vander Avenue. The York Gazette reported the husband