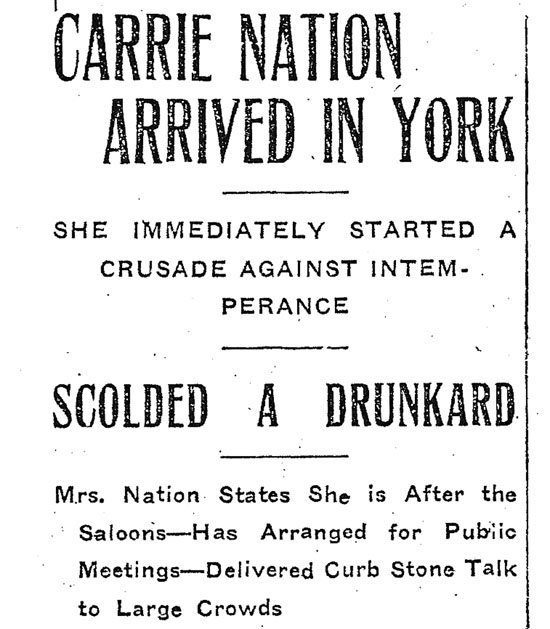 In 2006 York Daily Record columnist Jim Hubley wrote that the temperance crusader Carrie Nation was signed as top attraction at Hanover Fair in Sept 1902, speaking between horse races. She was also scheduled to give a lecture, Why I Smash, at the Hanover Opera House. Only 12 people showed up at the opera house, possibly because the new Hanover Hotel was at the same time handing out free beer at its opening. Ever resourceful, Nation went to the hotel, dumped beer on floor and gave the lecture there.

She then caught train to York to make her railroad connection. During her two hour layover in York, she stopped at the Green House, the Washington House and Northern Central Railway Hotel, breaking beer glasses and knocking cigars and cigarettes from mouths. Then it was back to the station, where she sold her little souvenir hatchets to a crowd before boarding.

Perhaps remembering how much work could be done in York County, Nation returned here five years later, spending a very active week this time. See my recent York Sunday News column below, drawn from the extensive local press coverage of the 1907 visit:

No vice in York County escaped the wrath of Carrie Nation

Temperance warrior Carrie Nation was quite the sensation when she spent a week in York County in July 1907. She received extensive coverage in the local press, some of which is excerpted below.

Known as a militant crusader against alcohol, famous for smashing bars and kegs of drink with a hatchet, her crusade was also against the use of tobacco. During her visit Mrs. Nation had arranged to speak at free meetings at Highland Park, and she hoped to visit Wrightsville, York Haven, Dallastown, Red Lion, Dover and Hanover. She also spoke in Windsor and perhaps some other unrecorded communities.

Upon arrival by train in York, the formidable 60-year-old woman refused to stay at the Hotel Penn when she discovered it had an active bar. She stayed instead at Crouse’s boarding house on George Street. She held a street service at George and Philadelphia streets, then boarded a trolley to Highland Park. Upon her return, accompanied by several newspaper men, she took time to strongly reprimand a passing inebriated man for his cursing. Nation also told the press that there were “about fifty ‘devil holes’ [saloons] in this city and I am going to get after them.”

Receiving a note signed “a bartender’s wife” to check on a Sunday drinking club on the fourth floor of 215 West Market Street, the local headquarters of the Bartenders Union, Nation found about 18 men drinking beer. After lecturing them that they should be home with their families on their only day off, she reported that one of the men told her: “We appreciate your words. I believe you to be a good woman and sincere in your work.” She said of saloonkeepers and bartenders: “I have found them to be a class of people such that I have more respect for than the hypocrite who votes to license the saloon,” a reference to what she called “whiskey voters.”

No one was safe from Nation’s campaign. She heard that the York police were “addicted to card playing,” usually indulging around 5:30 in the evening, so she stopped by. They might have been tipped off “for the cards were out of sight and there was nothing but a blue haze of cigar smoke to criticize.” She told the chief that she sympathized with the hard duties of a policeman, but warned of the evils of card playing and smoking and chastised several patrolmen who held cigarettes. A portrait of President Roosevelt at the station set her off on a tirade against the president, who she called “the greatest bluff in the country,” who had done nothing for the nation.

The next day, when harassed by a bunch of boys smoking cigars and cigarettes, she told them it was a filthy habit. ‘”Teddy smokes,’ cried someone in the crowd…referring to the president. ‘Yes, and his daughter, Alice Longworth, uses cigarettes. What do you think of your president who has a daughter who smokes cigarettes and a son who is training for a prize fighter. Mark my words, in five years the people will realize that Roosevelt is the brewers’ president.’”

Nation visited the almshouse and the jail. “The jail, says Mrs. Nation, is the guilty result of the saloon. The almshouse, the innocent result.” Speaking at the York County jail, she told the prisoners “to lead better lives, and said there was hope for the vilest sinner, if he repented.” Deputy Sheriff James Elliott made the mistake of smoking his cigar in Nation’s presence. She told him to “Throw that vile thing away.” When he protested that he enjoyed a smoke too much to do that, Nation came back with: “You’ll get all the smoke you want in hell if you don’t quit that dirty habit.”

Nation had more than a few words, as usual, to say to the press as she prepared to leave York for her next stop, Lynchburg, Va. “’I want to state that I have never received fairer treatment,’ said she to the newspaper men, ‘but your papers ought not to print those awful advertisements. The paper which goes into the home ought to stand for everything good, and just. You want to smash those ads, for newspapers lie when they say pure rye is healthy.

There are features about York I like,’ said Mrs. Nation. ‘I like it especially for its laboring classes. Everybody appears to earn his bread by the sweat of his brow. One thing I deplore more than any other. That is there are so many cigarette smokers. I did not see one man at your park under the influence of drink. I detected the smell of liquor on some who purchased my hatchets.’” At this point, Nation no longer physically wielded hatchets, smashing up saloons, but she sold small souvenir hatchets to raise funds for her crusade. Additional funds were generated by admission from those attending a passion play staged along with her free lectures at Highland Park, as well as collections taken at her many presentations. Nation was reportedly so upset with the York Traction Company, owner of Highland Park, for not supplying a band for her closing service, that they donated $20 ($500 in today’s currency) to her cause to mollify her.

In summation, she stated that she thought she had “opened the eyes of the people of York,” saying “I no longer smash, because I realize that to remove the saloon I must remove the cause. The miscast ballot is the cause. I am urging the right of women to vote, and the saloon keeper and his hirelings are contesting it because the woman’s vote would crush the saloon. The Republican party is a hypocrite or acts like one.”

Mrs. Nation was accompanied on her visits by General Little of the “Gospel Army.” The newspapers report “Before leaving she organized a branch of the Gospel Army, which, under direction of Captain William A. Speese will continue to wage war here on intemperance.”

Carrie Nation died in 1911, but less than ten years later, in 1920, the 18th Amendment, prohibiting the manufacture of sale of alcohol, was the law of land, continuing in effect for 13 years until repealed by the 21st Amendment. Even though prohibition didn’t last, Carrie Nation would probably be pleased that the 19th Amendment, giving women the right to vote, also ratified in 1920, still stands.

(On the other hand, some argue that the closeness of the people and organizations advocating temperance with those working for women’s suffrage held back granting the right to vote to women.)