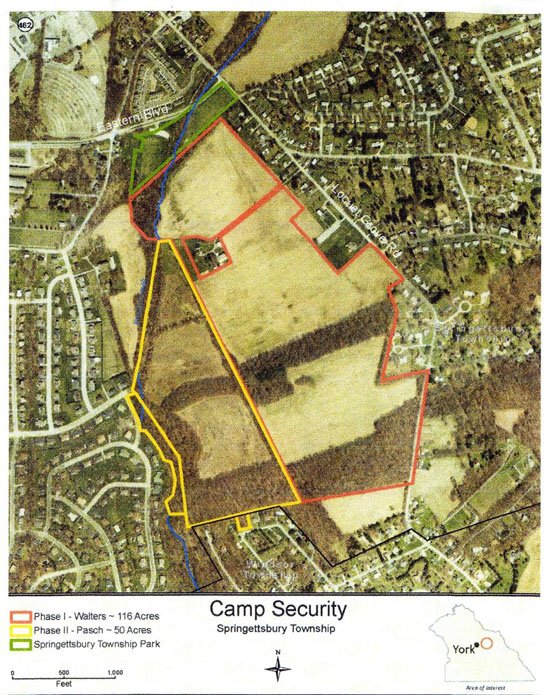 I am sharing two shorter portions of the history of Camp Security in this post. The entire recently revised narrative can be found at www.campsecurity.org under the History tab. In addition, scrolling to the bottom of that page will take you to Blake Stough’s transcription of Pennsylvania Archives documents listing many of the local Revolutionary War Militia Guards assigned to guard the British prisoners at Camp Security from 1781 to 1783. These guards came from both present day York and Adams counties, since Adams County was not created until 1800. These guards have many thousands of descendants today, most of whom do not realize the role his or her ancestor played during those turbulent times. This link takes you to previous Camp Security posts.

The post below addresses the landowner’s concern for the state of his property, as well as a short description of camp life:

CAMP SECURITY: BRUBAKER’S PETITION
David Brubaker, a citizen of Lancaster County, owned the land on which the camp was situated. In December 1781, four months after the arrival of the first prisoners, he sent a petition to General Benjamin Lincoln, Secretary at War, setting forth certain grievances regarding damages caused by the construction of the camp. He stated that he owned 280 acres of land near York, for which he had paid 1,200 pound specie. This land had been selected for the prisoner-of-war camp. One hundred acres of land had been cleared, he complained, the persons employed by the government had cleared an additional thirty acres for timber, for which he received no pay. The guards had also used his enclosure rails. This had deprived his tenant of the Indian corn on the property and the use of his pasture. He further stated that he did not want to say anything against Colonel Wood, but regretted the condition to which his land had been subjected. Brubaker acknowledged that the prisoners could not be removed due to inclement weather, but requested that no further damage be done to his property.
According to Gibson’s History of York County… (1886), about twenty acres of the land was cleared for the placement of the prison. Huts were said to have been surrounded by a picketed stockade of timbers, 15 feet high, closely fitted together and sharpened on the tops. Outside of the stockade, a village of huts was constructed. This second camp came to be known as “Camp Indulgence” because its inhabitants were not as closely guarded and some were given liberties to leave the camp.

CAMP SECURITY: CHANGES AND TROUBLE
By the end of 1781, it appears that many of Burgoyne’s troops had accepted their confinement and became friendly with the Americans. They were also permitted to establish cottage industries, such as making lace, buckles, spoons, pins and other items. If they were considered trustworthy, the prisoners were allowed passes to travel outside the camp to work and to sell items to the local residents. Some of the prisoners, upon approval, were hired out to local farmers.