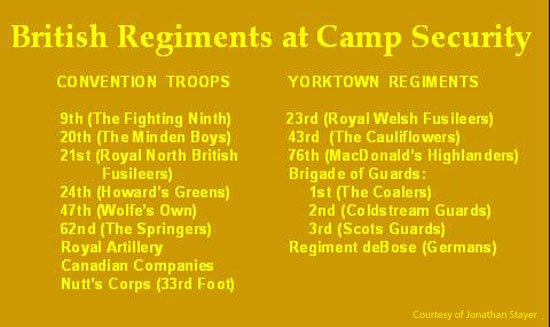 Camp Security is presently one of my primary research subjects. The importance of preserving the site so that future exploration and interpretation can be done is imperative. It’s not just about us, even though this last undeveloped Revolutionary War prisoner-of-war camp in the United States is right here in York County. True, many of our ancestors, including at least one of mine, served in the militia units that guarded the camp. Click here for the Friends of Camp Security Website. Under the History tab you can fine the names of many of the local guards. The list was compiled by Blake Stough from the published Pennsylvania Archives volumes. You might be surprised at who you find.

But what about the prisoners? As the captors and guards are part of our history, so are the captives part of British history. They hailed from England, Scotland, Ireland and Canada, and their descendants went on to populate the far-flung reaches of the British Empire, including Australia. There is now international interest in Camp Security; research is being done at the British Army Museum, and just this week the York Sunday News published an essay concerning Camp Security. It was submitted by Australian Stephen Tuck.

Jonathan Stayer, Supervisor of Reference Services at the Pennsylvania State Archives has been researching Camp Security longer than anyone I know. He became interested in the site in Springettsbury Township when growing up nearby. Jonathan compiled the list of British units above to which prisoners at Camp Security would have belonged.

My own research with the microfilmed records of the Papers of the Continental Congress and the Board of War continues. I am also interested in knowing more about Sgt. Roger Lamb of the Royal Welsh Fusiliers. Lamb’s memoir, An Original and Authentic Journal of Occurrences During the Late American War From Its Commencement to the Year 1783, originally published in Dublin in 1809, contains one of the few eyewitness accounts of life as a prisoner of war at Camp Security.

If any of you readers have come across anything or know of some stones to unturn, please let us know.

Here is a link to the nearly 20 blog posts, including two York Sunday News columns that I have writted on Camp Security.