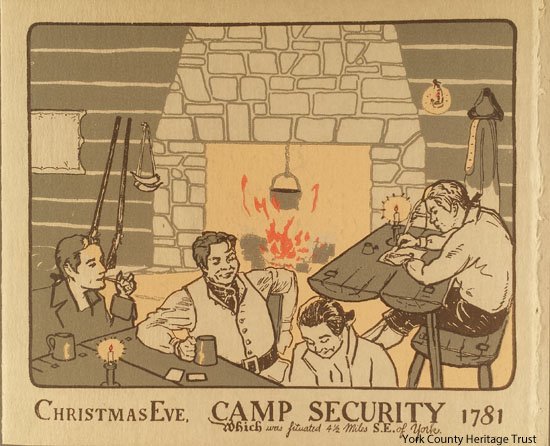 Looking through the antique and vintage Christmas cards at York County Heritage Trust Library and Archives yesterday, I found one with a Camp Security theme. It had a printed signature of Mr. and Mrs. Russell S. Wehler. 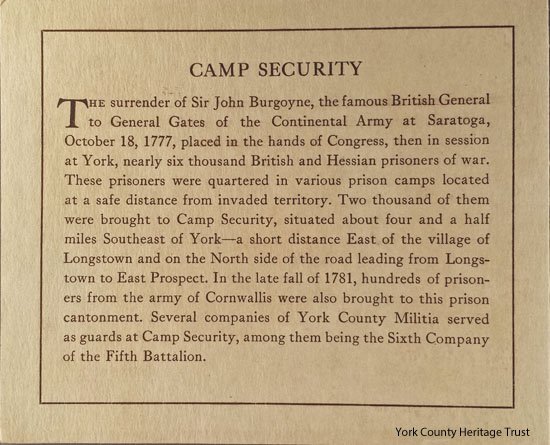 The front of the card is shown in the image above. It is a representation of guards at Camp Security at Christmas 1781. A fairly accurate description of Camp Security is on the back of the card. (The camp was a bit farther north than noted here.) A fold-out of an imaginary letter that might have been written by Henry Wehler, perhaps a relative of Russell S. Wehler, is attached inside the card. 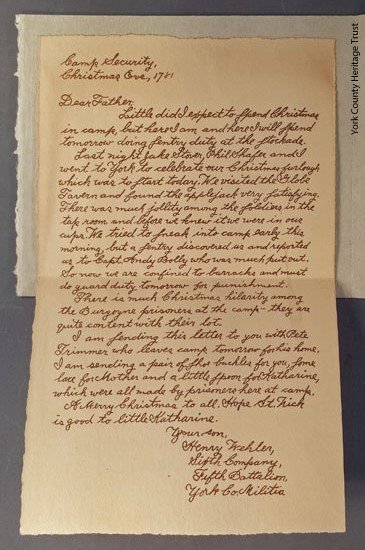 Camp Security
Christmas Eve, 1781
Dear Father:
Little did I expect to spend Christmas in camp, but here I am and here I will spend tomorrow doing sentry duty at the stockade.
Last night Jake Stover, Phil Shafer and I went to York to celebrate our Christmas furlough which was to start today. We visited the Globe Tavern and found the applejack very satisfying. There was much jollity among the soldiers in the tap room and before we knew it we were in or cups. We tried to sneak into camp early this morning, but a sentry discovered us and reported us to Capt. Andy Bolly who was much put out. So now we are confined to barracks and must do guard duty tomorrow for punishment.
There is much Christmas hilarity among the Burgoyne prisoners at the camp—they are quite content with their lot.
I am sending this letter to you with Pete Trimmer who leaves camp tomorrow for his home. I am sending a pair of buckles for you, some lace for Mother and a little spoon for Katharine, which were all made by prisoners here at camp.
A Merry Christmas to all. Hope St. Nick is good to little Katharine.
Your son,
Henry Wehler
Sixty Company
Fifth Battalion
York Co. Militia

Not everything matches up, but, according to the published Pennsylvania Archives Sixth Series, Volume II. (1906), Henry Wehler, Jacob Stover and Philip Shafer do appear on pages 530-531 “Associators and Militia. A muster roll of the Sixth Company, Fifth Battalion, York County Militia, Commanded by Capt. Andrew Paully.” That list is dated December 1782, not 1781. Henry Wehler was probably from the Paradise Township area. Also, the letter sounds to me more like it was written in the 20th century, not the 18th century, and the Globe Tavern in York that I know of probably dates from the early 1800s.

The card is undated, but it is probably from the 1930s-1950s era. Russell Wehler, age 44, is listed with his family in Spring Garden Township in the 1940 census. His occupation is advertising artist, so he very probably created this Christmas card himself, tying together Christmas greetings with a tribute to family and local history through his artistic talents. 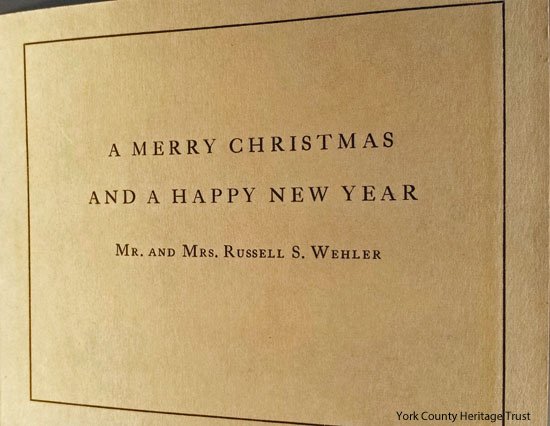