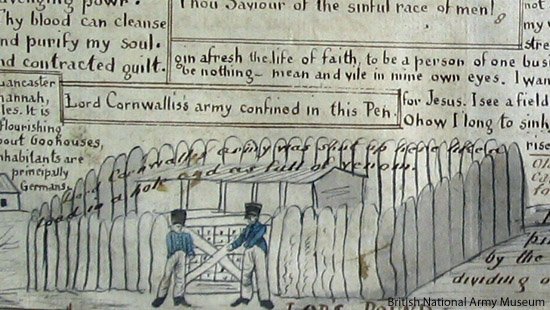 One of the best-known accounts of Camp Security by an eyewitness is Roger Lamb’s 1809 A Journal of Occurrences during the Late American War. Sgt. Lamb was born in Dublin in 1756. Joining the British army in 1773, he was sent to America with the 9th Regiment of Foot to fight in the Revolutionary War. He was first captured as part of the Convention Army surrendered by General Burgoyne to General Gates at Saratoga in 1777. During that time Continental Congress was meeting in York because the British were occupying Philadelphia, and word of the American victory at Saratoga was the best news in a long time.

The Convention Troops were moved from camp to camp in Massachusetts, Maryland, Virginia and Pennsylvania the next few years. Lamb and many others escaped along the line of march or from the camps themselves.

He made his way to New York and joined up with the Royal Welsh Fusiliers (23rd Regiment), eventually being captured again with General Cornwallis’s army at Yorktowne, Va. in October 1781. He was among those prisoners of war then sent to Camp Security at York. Upon arriving here, he was delighted to find that his comrades of the Convention Troops, already at Camp Security, had made arrangements for him to stay in their village of huts instead of being imprisoned in the stockade with the other Yorktowne prisoners.

Having the freedom of a radius of ten miles of Camp Security, it didn’t take too long for Lamb to organize another escape. A researcher at the British National Army Museum recently found color drawings, assumed to have been done by Lamb, illustrating Camp Security and that escape of Lamb and his friends. Permission has been obtained to share the drawings (a small segment of one is shown above), which the Friends of Camp Security plans to do at an upcoming event.

Lamb also wrote Memoir of My Own Life in 1811. That book, as well as A Journal of Occurrences…. have both been widely read here and abroad. Noted British author Robert Graves used them as the basis of his historical novels Sergeant Lamb of the Ninth (American title: Sergeant Lamb’s America) in November 1940 and Proceed, Sergeant Lamb in February 1941.

There is still much to be learned about Camp Security and research is continuing. Right now the priority is permanently securing the land so that this important site, the last known undeveloped prisoner of war camp in America can be thoroughly explored and intrepeted for the present and future generations.