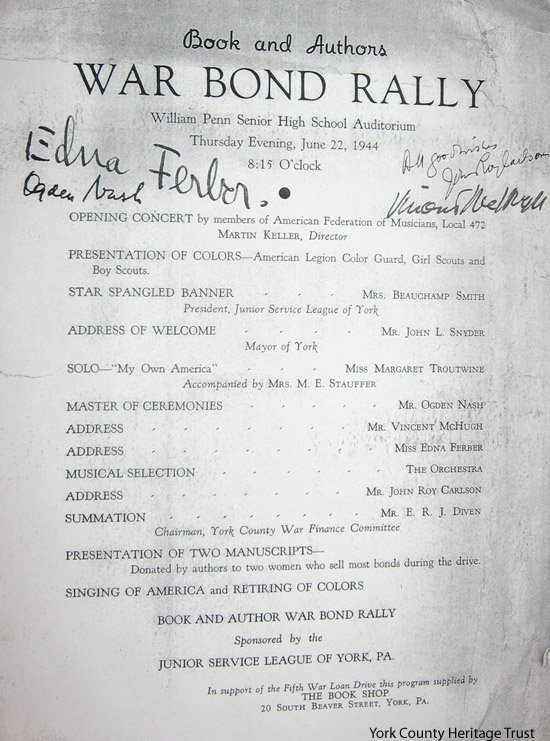 In my last post I introduced four noted writers: Edna Ferber, Ogden Nash, Vincent McHugh and John Roy Carlson. They were in York on June 22, 1944 on behalf of the World War II Fifth War Loan Drive.

The authors all spoke at the “Book and Authors War Bond Rally” held at the William Penn Senior High auditorium. The autographed program above was recently given to the York County Heritage Trust Library/Archives.

A Gazette and Daily article the next morning give us an idea of the participation of York County people: “Preceding the rally, which netted $1,832,632 for the U. S. Treasury Department, a dinner was served at Hotel Yorktowne for $1,000 bond buyers, bringing the aggregate for the evening up to $2,021,632.” When you do the math, that means 189 persons came up with $1,000 each, and that is in 1945 dollars. Also, this was the Fifth War Loan Drive, so it probably wasn’t the first time they had invested in their country.

The article goes on to give examples of bond sales throughout the county:

Thad Reindollar, chairman of the investment brokers division of the War Finance committee said his division has $1,000 to $250,000 quota. “Two groups have already gone over the top:” Merrill, Lynch, Pierce, Fenner and Beane with $368,000 and Graham-Parsons with $200,500.

Mose Leibowitz, chairman of the Retail Shoe division reported “that his group is only $625 short of its $38,000 goal. He claimed that sales clerks are being permitted to go out and sell bonds during store hours and that there is a keen competitive spirit among them.” He said William Bange of Newswangers, Harry Madonick of Smith Brothers’ Bootery, Roy Shive of Roy Shive and Co. and Cletus Reineberg of Reinebergs were top sellers.