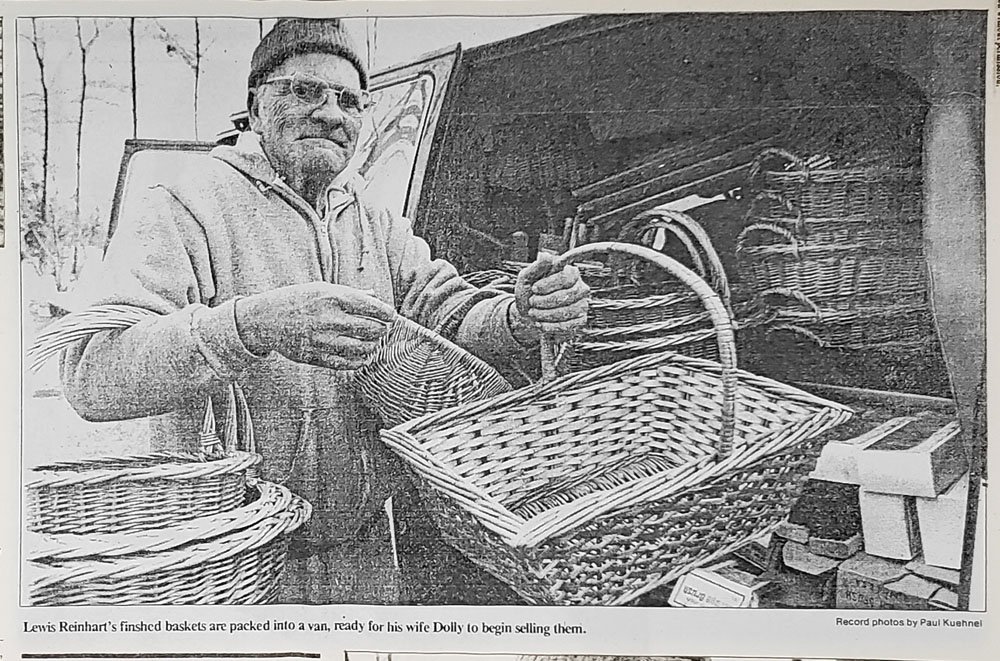 York’s Bullfrog Alley (part of East King Street) had a distinct personality over the years.  It was famed as the home of “gypsies” who went out traveling each summer and for basket making, some of which seem to be in same families.  It was also the home of a gang called “The Bullfroggers,” who had quite a fighting reputation, according to a recent email I received.  I will write more about the “gypsies” and other aspects of the neighborhood in the future.  See below for my recent York Sunday News column on basket makers.

Basket makers…Bullfrog Alley…Gypsies…where to start?   There are files on all three subjects at the York County History Center, each with plenty of information to tie together some intriguing stories. Since a query about basket makers set off my search, let’s concentrate on that.

Bullfrog Alley refers to several blocks of King Street stretching east from Fulton Street.  It was named Low Street before it became King.  The area was low-lying, and parts of it were said to be swampy, a habitat favored by bullfrogs, leading to the Bullfrog Alley nickname.  Marshy ground also facilitating the growth of water-loving willow trees.  Willow shoots were the raw material for well-made, sturdy baskets many inhabitants produced there in the late 19th and first half of the 20th century.

A May 1878 newspaper article describes “every man, woman and child” seated at their doorstep deftly weaving the willow branches into market baskets and other forms.  Some manufacturers seem to have just employed their families and perhaps one or two others for their production.  Others maintained a bit larger “factory.” Gibson’s 1886 History of York County… claims that nearly every house of the 55 lining Low street was a “basket manufactory” employing from five to 10 hands, and that some factories generated thousands of dollars in revenue annually.  Gibson says that the basket makers are nearly all German, industrious and prosperous.

The 1880 United States Census for Freystown, which included that area, backs up these claims. For example: John Einsig, age 50 is listed as Basket Maker, as are sons John, Jr., 16, and Andrew, 14.  The older sons, daughter Ida, 10, and son William, 7, were born in Pennsylvania, but John, Sr., 50, and wife Teresa, 48, were born in “Wurtenberg” [Wurttemberg, Germany].  More Einsigs and those with surnames of Storll, Lauber, Scharp, Meinhart, Meyer, Ross, Greenawalt, Kleinman, Lau, Lucks, Glassmeyer, Kehley, Smith, Nau and others are also identified as basket makers. The great majority of these adults were born in “Wurtenberg” or Prussia, of which Wurttemburg was a part of until the 1871 German unification into a single country.

So, were the basket makers of Bull Frog Alley the same as the “Gypsies” that lived in the same area in the same time period?  (Gypsy is often the label given to the Roma and Cinti people of Europe, traditionally wanderers.  York’s “Gypsies” may or may not have those roots, but they did seem to come from wandering groups in Germany.) Gibson’s history claims the basket makers and “Gypsies” were different residents of the same neighborhood. At least some of the families, however, seem to have been the same, with some intermarriage with other York families.

In October 1945 Henry J. Young, longtime Historical Society of York County director and librarian, interviewed his father James Young, 64, as well as his aunt Alice and sister Ruth, lifelong residents of that area.  They list the old “Gypsy” families as Einsig, Myers, Nicholas, Lauber, Mauhn, Meinhart, Kahley, Barnhart, Reinhart, Ritter and Kleiman.  Some of these names are the same as those of basket makers listed in the 1880 census.  The Youngs said that several were still making baskets in 1945, such as John Einsig. [He could even be young John Einsig from the census 65 years before.]  Henry Young also interviewed other older residents of the area.  They too named Einsigs, Reinharts, Laubers, Kleimans and Greenawalts as “Gypsies.”  All of these families had been making baskets in Freystown in 1880. European research shows that many of these families made baskets and travelled around before they emigrated to America from Wurttemberg and nearby areas from about 1840 to 1860.

In 1945 James Young was of the opinion that many had given up basket making because of a willow shortage caused by clearing and further settlement of Bullfrog Alley. As willow became scarce nearby, some were said to harvest their willow shoots in a low area around Mill Creek, near where Mt. Rose Avenue and I-83 intersect today.  Open areas conducive to willow growth shrank even more as city and suburbs sprawled.  The late 1950s Wellington housing project is was probably the final blow for Bullfrog Alley basket makers; many of their homes were acquired and razed for low income housing.

According to newspaper accounts, a few basket makers persevered.  In 1951 William Winemiller of Shiloh was still making all kinds of baskets, as he had been for 45 years.  He said he learned from “Gypsies” that came to the family farm when he was a boy. Winemiller grew his own willow by a creek on his property to keep him supplied.  In the same article, E. F. Reese, of Reese’s Variety Store in York, said their family represented four generations of basket making.  He named Samuel Glassmeyer and John and George Einsig among old time basket makers employed by the Reeses.  Besides baskets, their shop had woven lamp bases, tops for baby carriages and even bodies for pony carts for the York Carriage Works until the carriage works burned down around 1901.

The latest newspaper article on basket makers I have found was written for the York Daily Record in January 1985 by Marianne Clay and photographed by Paul Kuehnel.  It tells the story of Lewis Reinhart, still making baskets at age 67.  Reinhart says “I don’t know how far back basket weaving goes in my family.  My father made baskets.  So did his father, and his father.”  He describes not only basket making and selling, but also tells of the “Gypsy” life his family lived during the summer, traveling and selling baskets, especially in Amish regions.  He and his wife Dolly raised their seven children doing the same thing, only with a trailer, not the horse drawn wagon of his childhood.  He also confirms that his family came from Germany and that they might have been traveling basket makers there.  He and Dolly had bought a lot only 13 years before, near New Oxford, and settled their trailer on it permanently.  Reinhart still continued to make baskets though, which Dolly was currently loading into their van prior to crossing the river to sell to the Amish.

If any of you have any memories of the basket makers or photos of verified baskets made by them, I would appreciate knowing about them.  Please email me ycpa89@msn.com.

A few people have already shared some basket photos, which I really appreciate.  I will include them in a future post.

Click this link for more on Bullfrog Alley’s Gypsies.