How did they raise those big York County barns? 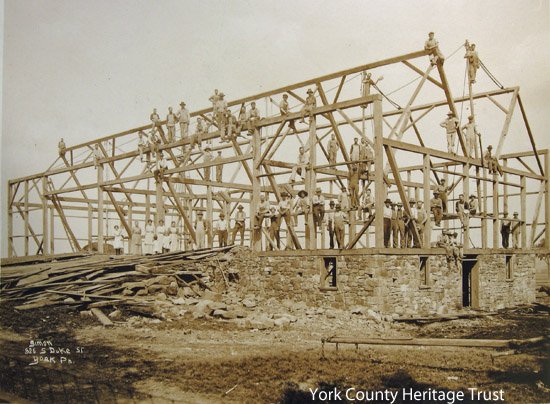 These photos of a barn raising crew were recently donated to the York County Heritage Trust Library/Archives. They are unidentified as to location, but are probably of the building of a York County barn. Please let me know if you recognize any of the people in the photos.

We have all seen these huge barns as we travel around York County, but how often do we marvel at how they were built a century or two ago, with just hand tools? Most York County barns are what are known as the Pennsylvania barn or Switzer barn. They ar eoften built on a natural incline, so that there are stables at ground level with a protective forebay, which is an extension of the floor on the upper level.

The upper level has plenty of room to store hay, straw and grain, and a threshing floor was initially used to separate the grain from the straw. A wide ramp of earth leads to the upper level doors so that the crops can be hauled in.

To build a barn, you found a carpenter with experience building barns, and then you needed all your friends, neighbors and relatives to provide the man power. I’m glad they included the aproned women on the photo above, because they would also be working hard that day. Can you imagine how much food they had to prepare to feed all those men and boys?

Community barn raisings were common into the 20th century, and still done by the Amish in this area. H. Winslow Fegley wrote a rather folksy article on barn raising in 1914 for Rural Manhood, Devoted to the County Work of the Young Men’s Christian Association in Village, Town and Country.

Barns not only had to be initially built, but since straw and hay are rather flammable, they sometimes have to be replaced. Looking at the above photo, I wonder if this was a replacement barn. Even though it has boards nearly covering it, the ramp up to the barn door opening looks like is has been there for a while, with grass growing on it. 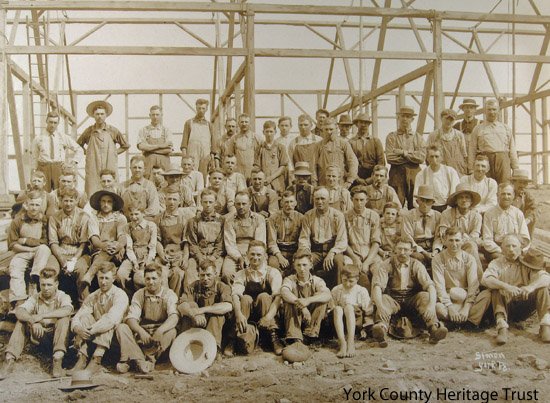 The Pennsylvania Historical and Museum Commission has a page on barn types on its website. If you are a real barn enthusiast, you can also join the Pennsylvania-based Historic Barn and Farm Foundation.