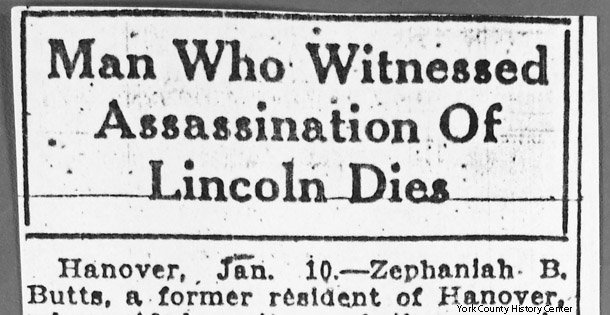 Over the years I have shared many posts showing local connections to President Lincoln and his assassination. They ranged from York native Edman Spangler, accused but not convicted of conspiracy in the plot, and assassin John Wilkes Booth, who allegedly attended school in York as a young man, to Harry Smeych of Chanceford Township, who said he captured the horse on which Booth had made his escape. Click this link to read those posts.

According to a 1938 clipping from one of the local newspapers, recently shared with me at the York County History Center by Director of Library and Archives Lila Fourhman Shaull, Union soldier Zephaniah Butts also attended the theater that Good Friday. It reads:

Hanover, Jan 10–Zephaniah B. Butts, a former resident of Hanover, who said he witnessed the assassination of President Lincoln in 1869, [the year should be 1865] died this morning at Carlisle. He was aged 88 years.

Mr. Butts was a native of Hanover. He enlisted at 16 in the Union army near the close of the Civil War. Stationed at Washington at the time, he had a seat in the balcony of Ford’s theater there the night Abraham Lincoln was shot.

Death, which followed a lengthy illness, occurred at the home of his nephew, Harley D. Butts, 16 East Lauther Street, Carlisle. The deceased was son of the late John and Joanna Bankert Butts, and was born February 11, 1849. His wife, who before marriage, was Jane Darmer, preceded him in death.

Mr. Butts had been a former caretaker at the Hanover Young Men’s Christian Association and was well known here. He went to Carlisle about 11 years ago. He was a member of the First Methodist Episcopal church, Hanover. His only survivors are a number of nieces and nephews. …Burial will be made in Mt. Olivet cemetery.