Another York-Baltimore tie in the news 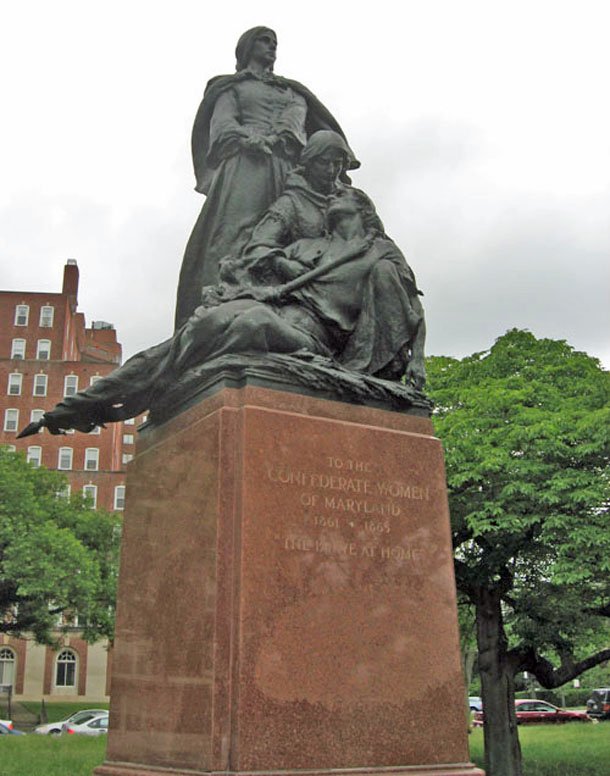 This post is intended only to show once more an example of finding a thread that leads back to York County in many stories, past and present, often where not expected. I am not soliciting anyone’s opinion on recent events, no matter how strongly they are held. My role is to simply share our common history as objectively as I can.

One of the four statues removed the other night in Baltimore was the Confederate Women’s statue. It stood very prominently at North Charles St. and West University Blvd., where I took the above photo seven years ago. My 2010 blog post, repeated below gives you the tentative York County connection:

Many of you have probably driven past this Baltimore monument. It sits at the center of a small triangular park at the intersection of Charles Street and University Parkway. The front of the granite pedestal reads: “The Confederate Women of Maryland 1861 + 1866 The brave at home.”

Carved on the back is: “In difficulty and danger Regardless of self They fed the hungry Clothed the needy and Comforted the dying.”

What does this have to do with York County, PA? According to the undated clipping below, found in a scrapbook of one of her descendants, the seated woman is Kate Reilly Small, the second wife of W. Latimer Small of the prominent Small family of York. The clipping reads:

Tribute to Well Known York Woman. “Polly Prattle” in yesterday’s Baltimore American says the following about a prominent York woman–Mrs. W. Latimer Small: “have you even taken a really good look at the monument to the Confederate women of Maryland on University Parkway, which was recently unveiled? I think nearly all of us have seen it as we passed to and from the Country Club, but only the other day I heard that the central figure was that of Kate Reilly. Surely, you remember this loveliest of all Virginia belles, now Mrs. Small, of York, and mother of our Katie Small Stewart. She is depicted holding the head of a soldier lad in her lap, an incident founded in fact, for the Virginia belle in the enthusiasm of her youth and her desire to be of service did hold the head of one of the Southern boys who had been wounded until he breathed his last.

Maryland was a border state during the Civil War. Although they never joined the Confederacy, many of their citizens sympathized with the South. Maryland is well populated with monuments for both sides. Click here to see more Baltimore monuments.

The recent 2015-2017 Special Commission to Review Baltimore’s Public Confederate Monuments had decided to retain the monument, with a plaque that has been installed to put it into context. This link will take you more information on the statue and the plaque that had been recently installed.

Note that Kate Reilly (also spelled Reily) Small (1845-1920) would have been an older woman when the statue was sculpted in the nineteen teens.  If she was the inspiration for the young woman holding the soldier, it seems the sculptor would have had to worked from an earlier photo or portrait.