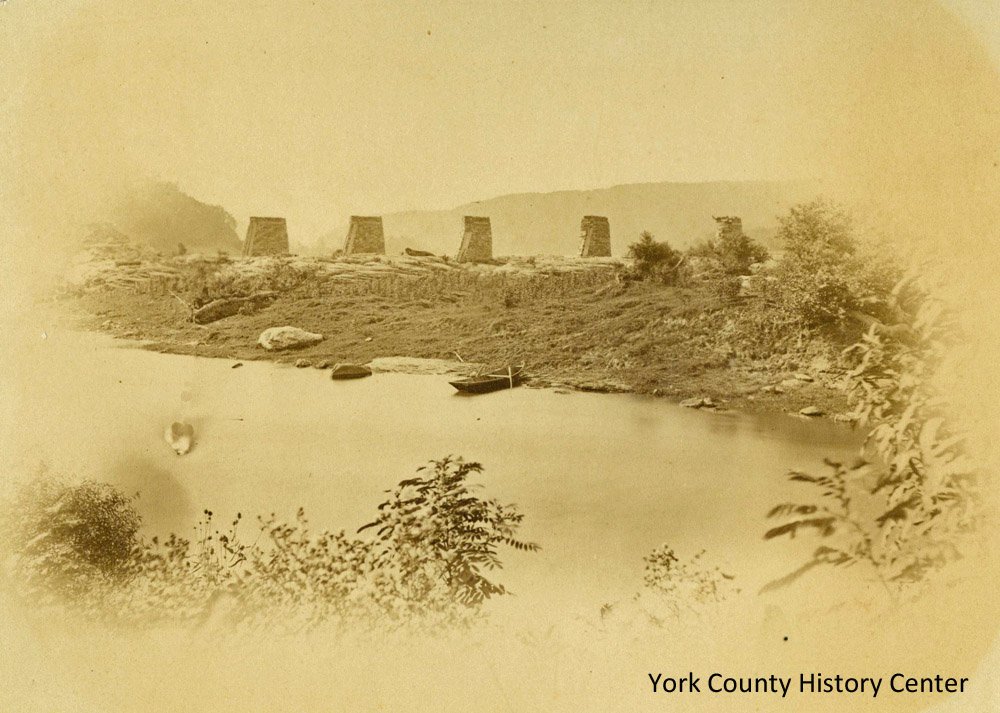 Another View of York Furnace Bridge

York Furnace Bridge, c.1856.
I only knew of one photo that showed any remnants of the 1855-1857 bridge at York Furnace. That photo, perhaps taken in the 1890s, showed the remaining piers on the island.
Click here for the previous post and column on the bridge.
After reading my column about the bridge in the York Sunday News, a friend gave a copy of a much earlier photo to the York County Heritage Trust Library/Archives. It is shown above.
The photo above could have been taken no later than early fall of 1856, as there are still leaves on the trees. The bridge was destroyed by ice in February 1857 and never rebuilt.

Except for the extremely short life of the York Furnace Bridge, there was no way to easily cross the Susquehanna River between the Wrightsville Columbia Bridge and the Conowingo Dam before the completion of the Norman Wood Bridge in 1968.
Click here for Jim McClure’s York Town Square post on the Norman Wood Bridge.
Click here for Joan Concilio’s post and photos of the Norman Wood Bridge.
Can you imagine how daunting crossing the Susquehanna River was before there were any bridges at all? It is a wide river, much wider than many of the other streams in the country that are called rivers. The very early settlers would have relied on small boats or rafts. Ferries were then operated at intervals between York County and Lancaster County. While essential for continued trade and settlement, the ferries were not a speedy form of transportation. They were also dependent on the weather. The river could be frozen over in the winter, and currents could be treacherous other times, especially during the spring freshets.
I admire my ancestors for having the stamina to get this far a couple of hundred years ago. After surviving an average of eight to ten arduous weeks of sailing across the Atlantic, I think I would have disembarked at Philadelphia and not gone any further. Come to think of it, most of them did settle in the eastern townships of York County. Maybe the mighty Susquehanna was the last straw.
Click on the links below for more of my posts on the Susquehanna River:
New bridge at Wrightsville after Civil War.
U.S. capital could have been on Susquehanna.
The dam below York Furnace.