Another look at York’s square 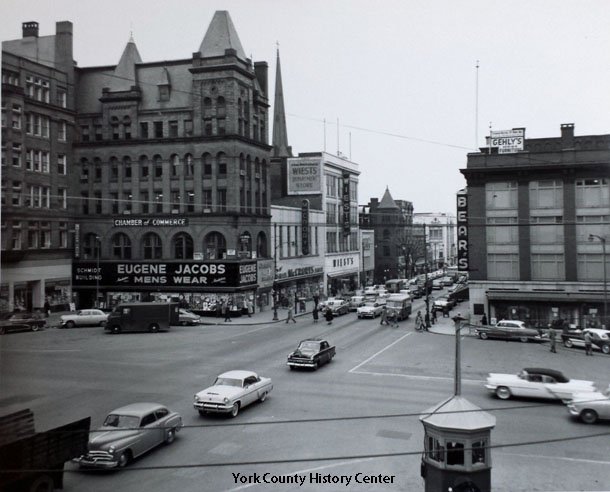 When I was growing up in Chanceford and Windsor townships, we did our much of our weekly shopping for groceries in Red Lion, but we traveled to York for serious shopping. I was quite familiar with Bear’s, Bon Ton and Wiest’s department stores, as well as the more specialized shoe and clothing stores, especially as a teenager. As a child I made the rounds of each 5 & 10, and I can probably still tell you the location of each one.

I have looked at many photos of York’s Center/Continental Square in the photo collection at the York County History Center Library/Archives, but I don’t remember seeing these particular four photos before, when it was the still bustling center of the county. They were taken by commercial photographer J. David Allen on February 24, 1956. This abundance of downtown stores would slide downhill from here; the York County Shopping Center had already opened four months before, heralding the shift from downtown to suburban centers and malls. I am heartened by the recent rejuvenation of downtown York, with the restaurants and varied shops, but the department stores that dominated are now in a decline themselves as our shopping habits change.

Since we like to be reminded of the downtown stores that used to be, I’ll take you on a quick trip around the heart of downtown with these photos, starting with the southwest quadrant, shown in the photo above:

The photo catches part of the Colonial Hotel with People’s Drug on the first floor. Next is the Schmidt Building, housing the Chamber of Commerce and Eugene Jacobs Men’s Wear. I can’t make out the next store’s name, but McCrory’s and Weist’s continue on down the first block of East Market Street. 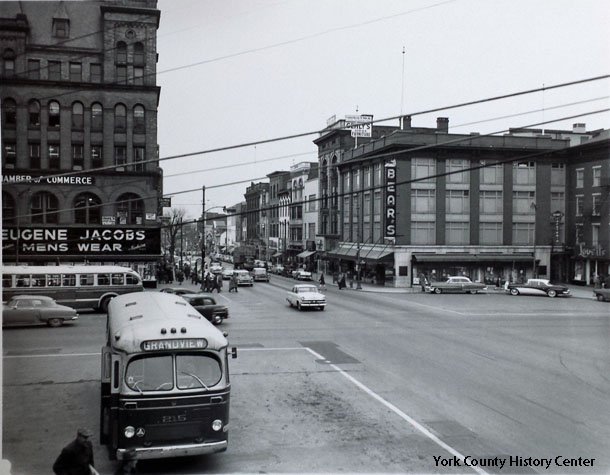 Next, Bear’s sits solidly on the northwest section, with an entrance to Bear’s Cafeteria in the corner, next is Lovetts. 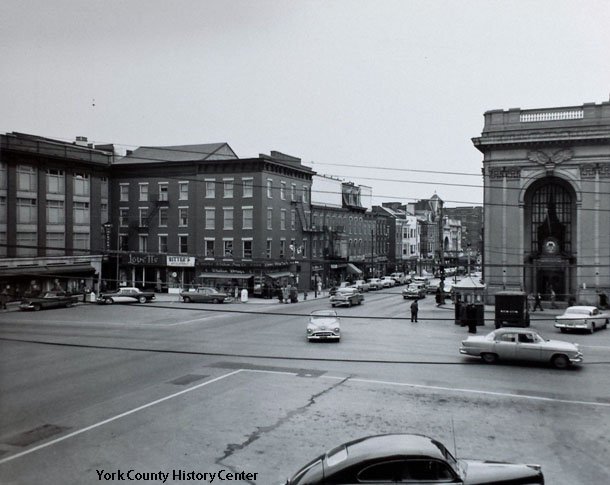 The third photo moves to the right, showing Ritters beside Lovetts, with Whelan Drugs on the corner of the square and North George Street. Though not readable, the Strand and Capitol theater marquees can be seen in the distance. The imposing First National Bank brings us over to the northeast quadrant. Note that the kiosk, probably used as a bus dispatching station at this point, is in its pointed roof incarnation. This link will take you to a previous post with photos of the kiosk over the years. 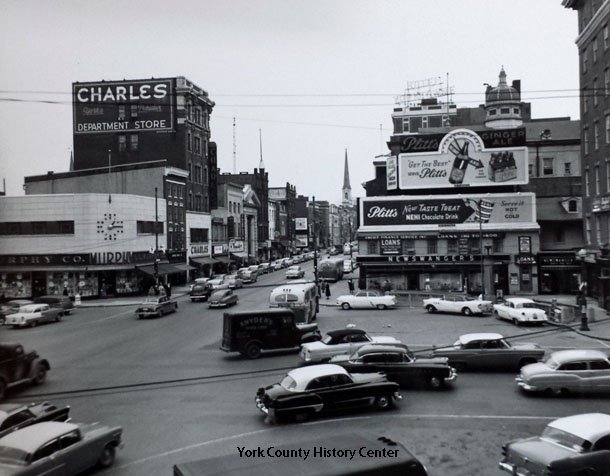 The final photo in this series of four looks down East Market Street, with G.C. Murphy’s clock showing that it is 1:15. Some store names are readable continuing around the corner, such as Charles Department Store, Thompson’s and Criders, and the First Presbyterian Church spire is visible. Crossing the street, you can see the towering sign above the Hotel Yorktowne and front dome of the then court house, now county administrative center.

Newswanger’s shoe store is topped with a double-decker billboard with a large thermometer. The temperature is about 35 degrees on this February day over 61 years ago. Both billboards advertise Plitt’s beverages. I remember Plitt’s Ginger Ale, but not the Nehi Chocolate Drink, which says it can be served hot or cold. Credit Finance Inc., is on the second floor above Newswanger’s, offering loans up to $600. The entrances to the underground comfort stations can be seen behind the parked cars.