Adams Express connected York County with the rest of the world 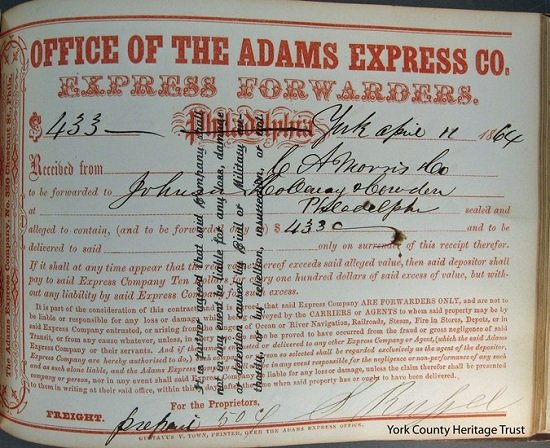 When researching regional history, you often come across the name of Adams Express. From the mid-nineteenth century until World War I, that is how private citizens and businesses shipped items large and small. Think of them as Parcel Post, Priority Mail, UPS and FedEx all rolled into one. See my recent York Sunday News column below to find out more about the company, including an an excerpt from a letter of gratitude a York County soldier wrote, detailing the fresh food his brother sent from here to Port Royal S.C. for his Christmas meals in 1862.

Adams Express also handled a lot of money. I found an Adams Express receipt book at York County Heritage Trust for C. A. Morris Co. drug store. It is about 89 pages and runs from July 1863 to December 1864. The money sent each time averaged around $500. Johnson, Hollow & Cowden were wholesale patent medicine dealers, and I suspect that most of the payments made by Morris were for stock from various suppliers. The medicines may have also arrived via Adams Express.

Connecting York with the World

Adams & Co. opened their first express office in York in January 1852. A lengthy newspaper ad gave notice that their “Great American Express” service would now run to and from Baltimore, Philadelphia, New York, Boston, Washington, Pittsburg, Cincinnati, Louisville, St. Louis & York, Pa. They would even dispatch their Special Messengers to San Francisco the 11th and 24th of each month.

Adams & Co. was started in Boston in 1840 by Alvin Adams with “2 men and a boy” as employees and “1 wheelbarrow” as equipment. It was incorporated, along with eight other express companies, as Adams Express Co. in New York in 1854, initially serving the east coast, including the coastal south and inland through Maryland, Pennsylvania and Ohio. According to company history, by 1887 Adams Express has 7,800 employees, 1,876 wagons, 2,235 horses and operated over 23,000 miles of railroad.

Adams Express became a household (and battlefield) name during the Civil War. In 1845 the government ruled that only the U.S. post office could carry letters for a fee, but Adams shipped just about anything else through its offices or those of its southern subsidiary, Southern Express Co. Both armies expressed money to pay the soldiers. Arms, uniforms and flags were shipped from factories and supply depots. Soldiers sent packets of money home for family upkeep, and bodies of fallen soldiers were even expressed home.

Home folks sent food to their friends and family members. James Nickel from York Springs wrote wife Barbara from Suffolk, Va. in 1863 that friends, the Trimmers, had sent a box to Cochenour, a fellow member of the 165th Regiment, Pennsylvania Volunteers, and told him to share with Nickel. He enjoyed “a pie, a small molasses pie, 3 small lite cakes and 4 fat cakes.” James served out his first term of service, but, much to his dismay, he was drafted a second time, serving in the 99th Regiment, Pennsylvania Volunteers. He and Barbara still corresponded about food; near the end of the war she wrote that the cherry crop would be good, so she would “box up some pies and send them.”

George W. Schenberger, from Lower Windsor Township, was with the 76th Regiment, Pennsylvania Volunteers at Port Royal, S.C. in December 1862. He wrote home to brother Henry: “Brother, I will also state that I have received the box which you sent to me…on the 23rd of December. Nothing was spoiled at all. …you can’t believe how glad I was when I opened the box and found that everything was nice and fresh. I saw in your last letter that the Adams Express cost $2.50. I am willing to pay that and also pay for the cigars. Brother, I can tell you that I had a gay Christmas. I had fresh bread and butter and apple butter, hot coffee and a few cakes for breakfast. For dinner I had oyster soup and one of the big ginger cakes which you sent to me. For supper I had fresh beef steak, bread and butter and apple butter, coffee and cheese and another of the big ginger cakes.”

Even though Adams Express served as a lifeline between the troops and home, there were some complaints, usually concerning fees. When the quoted price of shipping a barrel of sauerkraut, from a group of Lancaster, Pa. women to the 79th Pennsylvania Regiment in Kentucky, went up from $9.37 to $13.50 in two days, Lancaster Daily Evening Express editor Geist became so irritated that he gladly published any other complaints about the express company in his paper. (The money was raised and the soldiers greatly enjoyed the sauerkraut.)

The company continued to succeed after the war, employing 15,000 people by the time Alvin Adams died in 1877. At the outbreak of World War I, however, the U.S. needed to move massive numbers of troops and material and federalized the railroads. In 1918, the government incorporated American Railway Express by merging Adams Express, and its subsidiary Southern Express, with American Express and Wells Fargo, with 1/3 of the stock going to each of the three primary companies. The railroads were reprivatized after the war, and in 1929, 86 railroads formed the Railway Express Agency by buying out Adams Express, American Express and Wells Fargo, giving them good chunks of capital. Today all three are successful in the financial field; Railway Express went out of business in 1975.

Baltimore was the site of one of Adams’ primary offices since the 1840s because it was a transportation hub. In 1976 the Adams Express investment firm moved their main office to Baltimore, about a block from the site of their express delivery office of a century before. The main York office was on the southwest corner of Market and Beaver streets from the 1870s to the very early 1900s. Then Adams opened an office on North Street near the railroad station with a branch downtown. Railway Express seems to have initiated service from the North Street site.