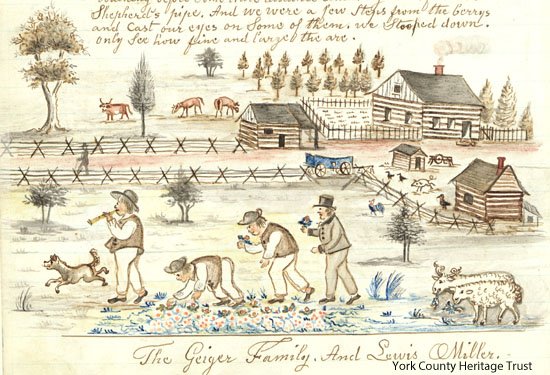 I never tire looking at the drawings of York folk artist Lewis Miller (1796-1882). His illustrations depicting town and rural life during the first half of the 19th century are so detailed. He wrote captions, most just a few sentences, but some quite lengthy, adding more insight into the daily lives of our forebears.

Having been born on a York County farm myself, I am fascinated by drawings such as The Geiger Family and Lewis Miller shown above. His longer than usual narrative of the scene is transcribed below. Even though Miller was quite well educated, rules of capitalization, punctuation and sometimes spelling weren’t deemed to be as important as they are today. Here is what “Loui” had to say about his visit to the Geigers of Windsor Township:

I Paid A Visit to the Three Brothers, the[y] are Bachelors. by the name of Geiger, Conrad, Paul and Peter, the[y] are living in Windsor township, six and a half mile from town. their they do all the work what Belong to house Keeping, their own Kooking and Washing, Spining thread and weave on the loom. make clothing to dress. And do their own Smith work, And farm a few Acres of land—In wheat and corn, for Bread which is made to support life, and have A fine garden, and Orchard of All kind of good fruit trees, and a Stand of Beehives w[h]ere Bees are kept for the Honey, and to make A little money. the[y] make and Burn Charcoal, and Sell them in town.
The[y] have horse’es, Cows, Sheep—Hogs, Chickens—And Turkeys. one Acre of ground that laid idle for Some Years, all over Spread and full of Strawberrys, the[y] were ripe—When I was at the Place. In the month of June, 5th 1810, we were walking to the Strawberry pat[c]h, humming a pretty Song then fashionable in the Country by the Germans. Conrad was A walking before some little distance Amusing himself with A Shepherd’s pipe. And we were a few Steps from the berrys and Cast our eyes on Some of them. We Stooped down, only See how fine and large the[y] are.

Miller is shown the young man in the rear with the top hat. The Geiger brothers and their farm are great examples of self-sufficient Pennsylvania Germans 200 years ago. Since I also live in Windsor Township, about the same distance from the center of town as the Geigers, I plan to do some research in the next few days at the York County Heritage Trust Library/Archives to figure out where this fruitful farm was located.