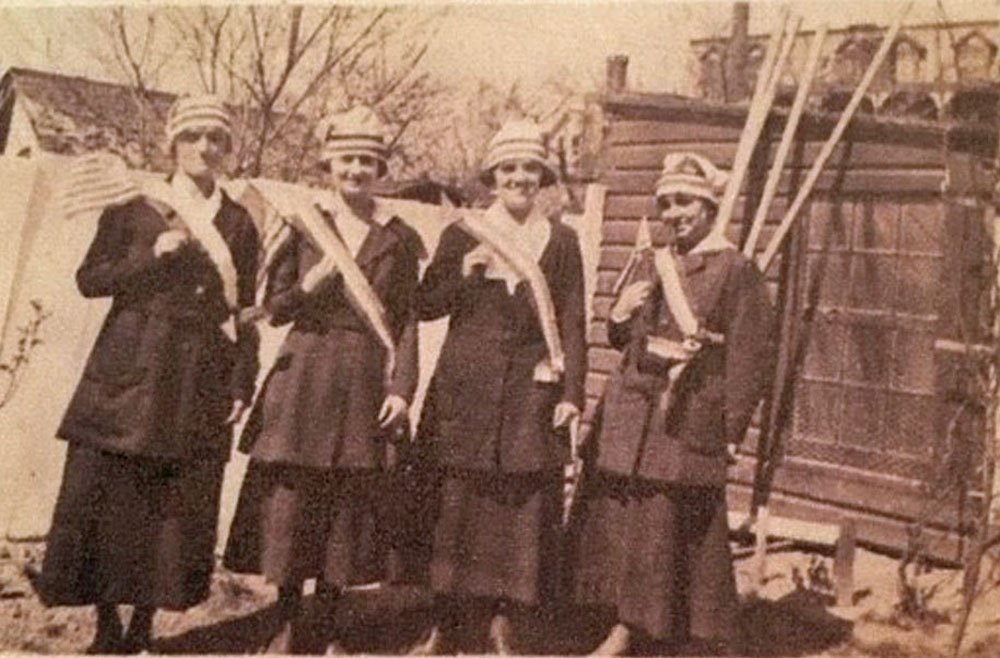 In response to my recent York Sunday News column on the 1914-1915 York County campaign for woman suffrage, Brenda Neff kindly shared a photo of four of the local suffragists.  It is great to put some faces on community participants.  Note that the sashes closely resemble the two in the photo below, which are in the York County History Center collections.

Two of the women above in the photo above are Brenda’s great-aunts.  Carrie Munchel is on the far left and her sister Naomi Munchel Breen is third from left.  The other two women are not identified, but the woman between the Munchel sisters might have some resemblance to Anna Dill Gamble.  The Munchels were of the Catholic faith, as was Gamble.

I asked Brenda for some background on the Munchels.  She responded:

They lived at 729 S. Beaver St. and worked at Dentsply as did all the Munchels.  They were members of St. Mary’s, as the Munchels were involved in that church from the ground up.  Carrie never married.  The story in the family is that she wanted to become a nun but was needed to care for others in the family as their father, John Munchel, my great grandfather, died at 38 while working as a mason.  Naomi married Thomas Breen and then lived at 280 W. Jackson St. Naomi had a twin brother Clement.  Another brother was Raymond, my grandfather, who died when my mother was a student at York Catholic.  I never knew him.

I neglected to ask Brenda how old the sisters would have been at the time, but I found Naomi Munchel Breen on Find-A-Grave, and she was born in 1889, making her about 25 at the time.

I will add a copy of the photo to the Woman Suffrage files at the York County History Center.  Please contact me if you happen to come across any photos you think might show that your relatives also participated in the fight to get women the vote.