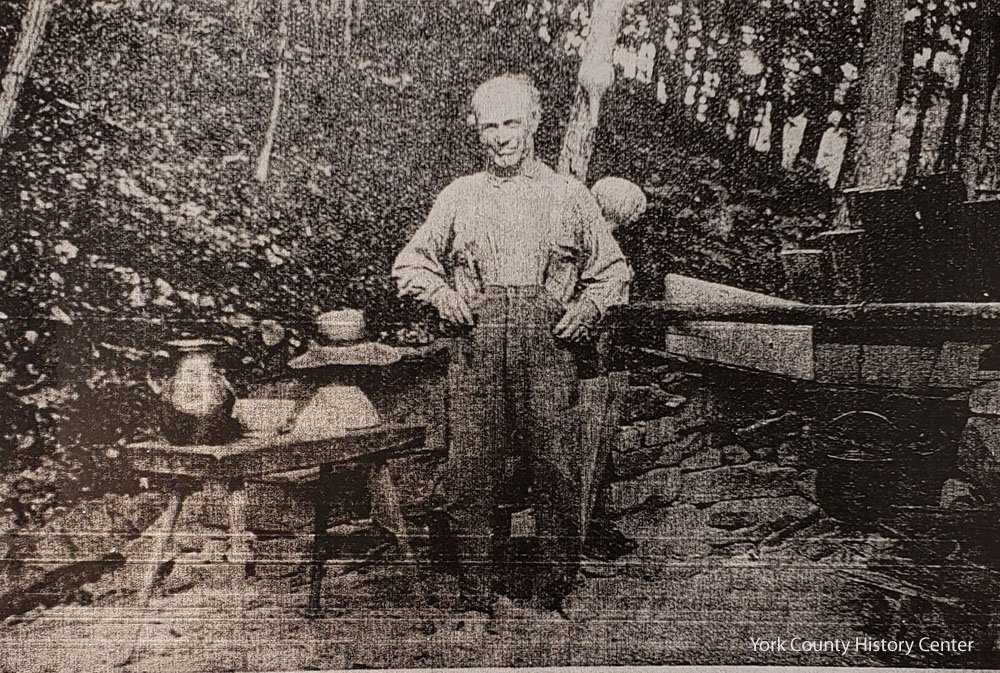 Over the years I heard of the “Hermit of the Hellam Hills,” and came across a couple late 19th century newspaper articles that mentioned Joel Strong, the hermit. When I started digging in the files at the York County History Center and perusing newspapers.com (available to use at the YCHC library/archives), I had no idea how much there would be on this “hermit” who had people visit his park by the droves.

There was plenty of material to put together my recent York Sunday News column on Strong. (see below) I, however, recently talked to Katina Snyder of the Kreutz Creek Valley Preservation Society, and found, as I suspected, that I need to visit that organization’s museum and archives to learn even more about Strong and his park. So look for a future installment on the hermit that did not exactly live a solitary life.  Here is the recent column:

Joel Strong, the hermit of the Hellam hills

How can you be a hermit, but have wagonloads of people come spend a day at your pleasant park? I have pieced together this unlikely tale from newspapers, censuses, family histories and York County History Center files.

Joel Strong was born in the Druck Valley area of Hellam Township in December 1829 and never left. Census records identify him as a carpenter. He seems to have married Leah Druck, a niece of his brother-in-law, around 1860, at about age 30; she was in her late teens. She died around 1869, leaving no known children.

The 1880 Hellam Township census lists Joel, age 50, living in the household of his widowed sister Elizabeth Druck. By 1890 he was evidently living outdoors on his own nearby 13 acres of land. Over time, he created what accounts say was a beautiful park, just the thing for pleasure seekers from the York area to visit, have fashionable picnics and even engage local bands for music.

From the early 1890s, local newspapers report visits to “Strong’s Park” from small private groups up to full-blown Sunday School picnics. For example, the July 13, 1892 York Daily announces the upcoming Hellam United Brethren Sunday School picnic at Strong’s park. There would be speakers and the Pleasureville band.

All ages and social classes came. Some of the leading names of the community: Gibson, Smith, Peterman, May, Small, Bayler and Eyster are listed in a private party’s visit in August 1895. And a very large ad in the July 1896 Daily recounts an imagined conversation by telephone [status symbol] between McClellan & Gotwalt caterers and a lady planning to take a party to Wild Cat Falls or Strong’s Park that day. The ad includes a long list of foods from which she chose. She made sure to include an ice cream freezer in the order, so they could make that dessert at the park grounds. The caterer promised to have the requisition at her house in a half hour.

Strong evidently made the wooded hilly site, with its small stream, into appealing picnic grounds, with neat pyramids of stacked stones and rustic benches. He was quite acrobatic, easily climbing trees, skills he sometimes exhibited to park visitors.

He refused to discuss his earlier life. According to distant relative, stories were passed down that he first started hiding in the hills to avoid being drafted during the Civil War, but I have not seen any evidence to back up that story. Others indicate that he became reclusive after his wife died. Even though he owned his 13 acres, he seems to have never owned a house. Census records show him living with relatives, always with large families, so solitude just might have looked good.

Strong became well known in this area and you could find accounts of the hermit and his recreation grounds in newspapers around the state, including a long, perhaps exaggerated, article in the Philadelphia Inquirer in 1891. Still, the descriptions of his elevated bed of boards, plank table and makeshift fireplace with hanging iron kettle sound plausible. Baths were taken in the nearby stream, with a shallow cave refuge from bad storms. When Strong grew older, a very cold night might send him to his nephew’s home nearby.

Vegetables that he cultivated sustained him. A rare foray to civilization is reported in the October 31, 1897 York Gazette. It relates that Joel Strong of Strong’s Park in Hellam Township made his semi-annual visit to friend Al Boll at Ebner’s Café. The purpose of the trek, eight miles (three hours) each way, was to lay up his winter supply of tobacco.

The July 24, 1905 Daily reports Strong’s death at age 75 at the home of his nephew, Frank Shermeyer, near Hallam. He had gone there when he became ill from blood poisoning a month before. He lived alone in the hills for 18 to 20 years, dating back to at least 1887. Considering that sightseers were flocking to Strong’s Park by the early 1890s, you could not say the well-known “hermit” was exactly isolated. His passing was picked up by papers as far away as Scranton.

The 13 acres were sold by Strong’s estate in October 1905 to John W. Gable of Hellam; Gable said he planned to fix up the grounds and keep using it for picnic parties. By January 5, 1906, Gable and partner J. Edgar Small of York had sold thousands of stock subscriptions for a planned gravity water system company. A dam was to be built at springs at Strong’s Park and the water piped down to Hallam. I do not know if this came to fruition.

Newspaper articles show that groups continued to utilize the park. The Daily names 24 young girls that would be treated to a day of outdoor games at Strong’s Park by Mrs. Fred Gable, their Hallam Lutheran Church Sunday School teacher, in June 1908.

The latest account I have found so far of a picnic there, in early September 1908, was also picked up in other Pennsylvania newspapers, such as the Williamsport Sun Gazette and New Oxford Item. It says 56 girls from Hallam were not even trying to establish a record when, at a picnic given for them at Strong’s Park by E. M. Seiple, a local restauranteur, they “ate 11 gallons of ice cream, drank a barrel of lemonade and consumed more cakes and sandwiches than it would be polite to mention.” Somewhat dismayed, Seiple said “his next picnic will be to the boys.”

The Hellam hills are still beautiful, worth a detour to enjoy the nature and the views. It is nice to know how much our forebears appreciated the unspoiled landscape; we hope these natural spaces will remain for generations to come.