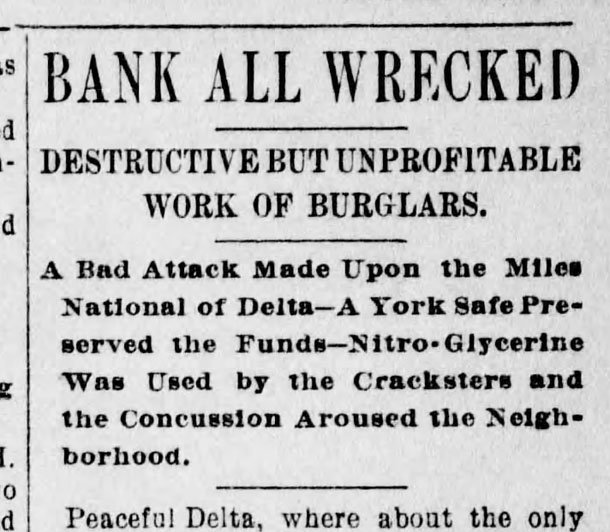 Tucked down in the far southeastern corner of York County, Delta has always been pretty quiet. According to the April 10, 1897 Gazette, some would-be bank robbers livened up the town two days before.  The front page article in the York paper goes into detail:

The writer says that the only usual excitement in Delta is when hard-driving boys from the countryside tear down the street about a mile, from the tavern at one end of town to the one at the other end, “in an effort to keep the interval between drinks down to a minimum.”

The two-story brick Miles National Bank stood in “South Delta,” which must mean the section adjacent to Cardiff, Maryland, since that is as far as you can go and still be in Pennsylvania. The three burglars gained entrance by climbing a ladder and going through a window in the rear of the building. They were allegedly prepared with “…saws, sledges, breast drills, files, chisels and in fact everything necessary to make an attack on a big safe or vault.”

The bank vault boasted three-feet-thick walls of brick and stone with a fire-proof vault door. A burglar proof York safe was inside the vault. After drilling a hole through the vault door and disconnecting the bolts, they went to work on the safe with nitroglycerine. The resulting blast destroyed the thick vault that held it, but not the safe.

The bank building, and just about everything in it except the safe, was badly wrecked, with the front of banking room and its plate glass windows scattered everywhere. Counters and desks added to the wreckage. The county-made York Safe held, only losing some exterior levers and a slight malfunction to the time lock, resulting in the bankers having to wait until noon to open it instead of the usual 9 a.m.

The burglars had managed to get into some safe deposit vaults outside the main vault, but the only loss reported was $75 from carriage builder Bulett’s safe deposit box.

The writer speculates that the burglars did not expect such “havoc and noise” and that as lights quickly appeared in neighboring windows, residents saw the three of them make off from the back of the building, disappearing into the hills by the dim light of morning.

Here is a link to a previous post with photos of some York Safe and Lock burglar proof safes.

And here is a link to some successful safe cracking in Red Lion and Dallastown.  Perhaps those post offices that were hit didn’t have York made safes.