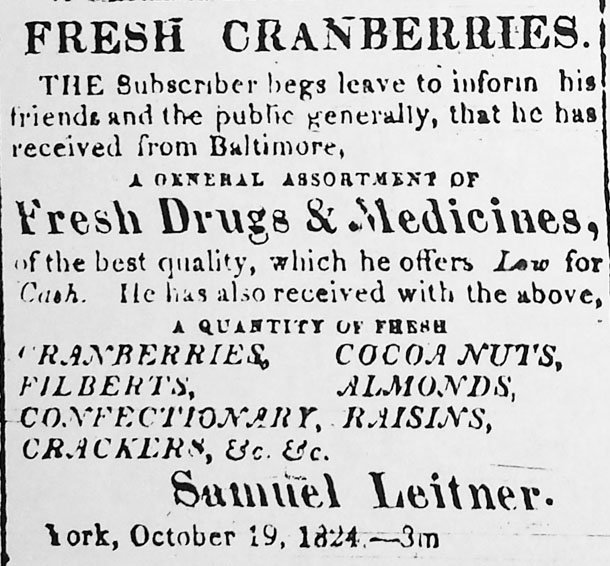 Advertisements in old newspapers give us a glimpse into the lives of our ancestors. Here is a sampling from the December 21, 1824 York Recorder, on microfilm at the York County History Center:

The Subscriber begs leave to inform his friends and the public generally, that he has received from Baltimore, A GENERAL ASSORTMENT OF Fresh Drugs & Medicines, of the best quality, which he offers, Low for Cash. He has also received with the above, A QUANTITY OF FRESH CRANBERRIES, COCOA NUTS, FILBERTS, ALMONDS, CONFECTIONARY, RAISINS, CRACKERS, &c. &c.

Leitner placed the ad to start running on October 19 and run for three months in the York Recorder. The cranberries and nuts would have been especially popular during the holiday season.

George Morris’s ad for his dry goods store on the square was also first placed in October. It illustrates that local merchants were buying their wares from Philadelphia, as well as Baltimore, shown by the Leitner ad above. Morris advertises:

in the house of WILLIAM NES, Esq. corner of Main Street and the public square and directly opposite the Post Office,–where he has just received from Philadelphia, and is now prepared to sell, the best and cheapest assortment of CLOTHS, CASSIMERES, CASSINETTS & VESTINGS, &c. to be had in York.

He respectfully solicits the custom of his friends, being determined on all occasions to sell CHEAPER than any other house in York.

A few things to note in the ad above: Merchants often rented their storefronts, so you cannot find out how long Morris was at this site by checking deeds. Nes had an interest in part of original York Lot 70, so the site was probably on the west side of Market Street at the square. Click here for my blog post on that quadrant of the square. Waterloo shawls seem to have been made by the Waterloo Woolen Company of Waterloo, New York. Marino handkerchiefs were probably made from the fine wool produced by merino sheep. The Tartan and Circassian plaids might have been imported, as he also mentions domestic plaids. Tartans are plaids that are woven the same way both vertically and horizontally, forming a grid. Circassian seems to refer to goats from a region of present day Russia near the Black Sea and Caucasian Mountains. Perhaps that plaid was woven yarn from the goats’ hair.

Druggist Charles A. Morris also posted a small ad in the same issue of the Recorder. He was selling:

A quantity of this ointment so celebrated for the cure of Rheumatism, White swellings, Ulcers, Felons, Sprains, Tetters, Chilblains, Burns and Scalds, has just been received and is offered for sale at the drug store of Charles A. Morris.

It is amazing how all-purpose some of those patent medicines were purported to be. And they promised a cure, not just a treatment. White swelling is the swelling of a joint; a felon is a painful abscess on a finger, tetters are skin rashes caused by eczema or ringworm and chilblains are small itchy bumps on extremities caused by cold exposure.

According to Prowell’s History of York County, Charles A. Morris, who first opened a drug store on South George Street, removed to the third door on East Market Street in 1823. Charles A. Morris might have been the brother of merchant George S. Morris. Charles was married to Cassandra Small, sister of leading businessmen Philip Albright Small and Samuel Small. The Morrises were also philanthropists in their own right.

This link will take you to a previous post on a mid-nineteenth century cure-all.