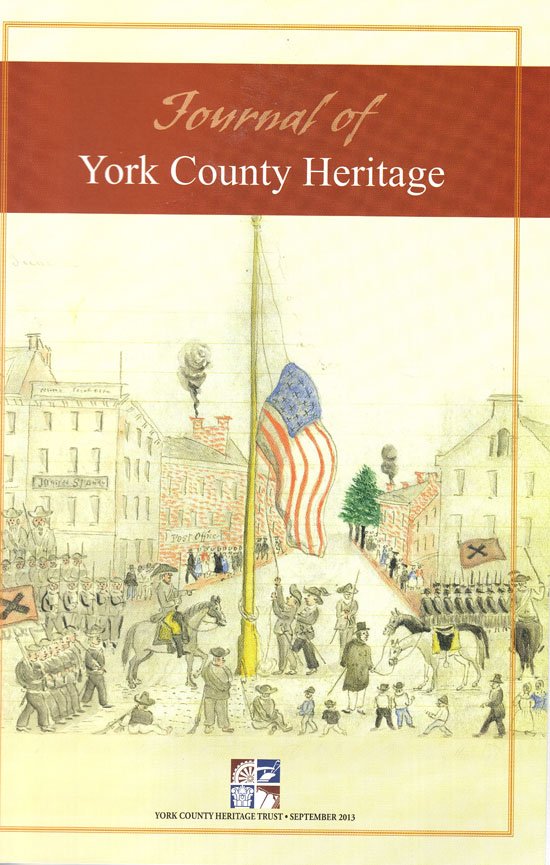 What can we learn about our shared history in the recently published 2013 Journal of York County Heritage? The theme of the journal this year was driven by the 150th anniversary commemoration of the Civil War. Here is a rundown of the articles:

First, Daniel Roe, York County Heritage Trust Director of Education, gives an overview of YCHT’s current exhibit in “The Fiery Trial: York County’s Civil War Experience.” He explains how the comprehensive exhibit looks at the many ways the war affected the local citizens as well as the soldiers who went off to battle.

The late Dr. Charles H. Glatfelter was one of the preeminent historians of our area and beyond. He has written many books and articles on Pennsylvania and regional history. His final article, “The George Bear Incident, 1863,” appears in this year’s journal. In late June 1863, York County was full of invading Confederate soldiers. Most of the telegraph lines had been cut, so Union General Meade sent an important message by courier. The courier was mistakenly shot by Bear, a Codorus Township farmer, who thought he was a raiding Confederate. The carefully researched story continues on to unfold the aftermath of the incident.

Dr. Glatfelter’s article is followed by “Remembering Dr. Charles H. Glatfelter” by historian Dr. Michael Birkner. It is excerpted from Dr. Birkner’s memorial address, recalling the joy Dr. Glatfelter found in pursuing the many intriguing stories our area can reveal.

In “African-American Civil War Veterans with Ties to York County, Pa.” Rebecca C. Anstine outlines an ongoing research project she has been pursuing for years. She takes this opportunity to give us background and scope of this sometimes overlooked aspect of York County’s Civil War involvement. Anstine shares some of the discoveries she has made so far on the Green, Harris, Wilson, Barton, Jamison, Webster, Johnson, Worthington and other families, showing the wide range of their service and experiences.

Even after 150 years, the discussion still goes on about York surrendering to the occupying Confederates in June 1863. Did they really, or not? If they did, should they have resisted instead? What were the pros and cons? What role did young York businessman Arthur B. Farquhar play? In “‘To Surrender the Town Peaceably’: the Confederate Occupation of York,” Victoria Miller Allen goes back to original documents to recount what happened, who was involved and what their reasons were.

You too can help record York County history for future generations with your submission for the 2014 issue. Click here for details and deadlines.