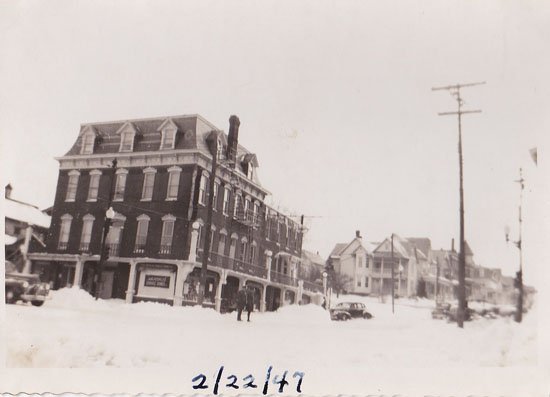 As a change from the current snow, here are some photos of Red Lion snows of years past. They are from a collection of photographs taken by D. Miriam Smith, long-time chronicler of the Red Lion area. The collection has been shared with me by Nancy Hedrick for sharing with the Red Lion Area Historical Society and York County Heritage Trust. I will also include more of the photos in future blog posts.

The first photo above, dated February 22, 1947 shows the Lion Theater and the G.C. Murphy 5&10 next door in the first block of North Main Street. There is a policeman standing in front of the theater, seemingly surveying the snow piles. By zooming in, I could see that the movie was Blondie’s Big Moment, one of a series of popular comedies starring Penny Singleton and Arthur Lake, based on the Blondie comic strip.

The second photo was taken on the same date and shows the Wallick House hotel and restaurant on the Red Lion square. A Peoples Drug Store occupied the first floor storefront. The building was torn down years ago and is now the site of Lion Pharmacy. There seems to be two policemen on this photo looking at the snow.

Research reveals that a sizable snow fell on York County February 20-21, 1947. I haven’t yet checked how much York County accumulated in that storm, but a list for neighboring Lancaster County ranked it at their 10th deepest (before the recent storm) with 16 inches.

The photo below shows the Farmers and Merchants bank, also on the Red Lion square, after a smaller snowfall in 1964. That is currently the site of Wells Fargo bank. The clock is the only item that remains from the former bank façade.