More toys that might be in York County attics 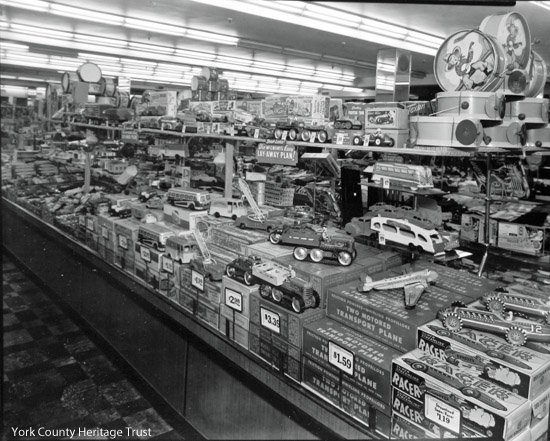 The photo above could have been taken about the same time as the one I recently posted of the Davy Crockett merchandise. This one is also from the Simon Collection at the York County Heritage Trust Library/Archives. It is identified as McCrory’s toy department and is probably from the 1950s.

There are no Christmas decorations visible, but the sign says:
“Shop Early! Use McCrory’s Easy LAY-AWAY PLAN!”

By that time some of the department stores had their own charge plans, but most places accepted only cash or checks. (Remember the Bon-Ton’s little metal plate in the green case?) Lay-aways were very popular, as were Christmas Clubs at all the banks.

These toys again seem inexpensive at first glance, but an average factory worker might have been making about $1.50 an hour at that time. I don’t see a price on the singing cowboy drums, but, moving left, the Speed King Race Car and Climbing Fighting Tank are each priced at $.89.

Moving down to the next self, the larger Streamline Super Racer is $1.19 and the Two Motored Transport Plane $1.59. A little further to the left the Sparkling Climbing Tank is $2.98, the Fire Truck $1.98, Delivery Truck $1.19 and Bus $2.98. The boxes indicate that most of these toys were friction powered. In other words, you ran the rear wheels backward over the carpet, which wound a spring. When you released the toy it then moved forward.

The most expensive toy on the photo is the Reversing Tractor Truck at $3.39. This tractor truck with belted wheels is wound with a key. It was made by the famed Marx Toy Company. (A couple of these, in mint and excellent condition, have sold on eBay recently at prices that would have made this toy worth keeping in your attic for 50 years.)

I hope that some of you have kept these sturdy metal toys and that the second, third and perphaps fourth generations of your families are still enjoying playing with them.