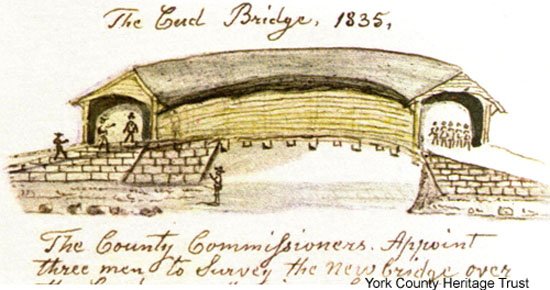 Many covered bridges dotted the landscape in the 19th century. No original York County bridges survive, although fellow blogger Jim McClure says there were still 25 in the county as late as 1937.

The specifications for these sturdy structures could easily be outlined in a newspaper ad, such as the one below from the York Gazette:

“Commissioner’s Office
YORK COUNTY, August 9, 1828
Proposals will be received at the Commissioner’s Office, in the borough of York, on the 20th of August inst. for the purpose of building a good and substantial
WOODEN BRIDGE,
across the Gut, or thoroughfare, near Eib’s Landing, in Manchester township, on the road leading from the town of Liverpool to said landing, where the old Bridge formerly stood, of the following dimensions, to wit:–To contain in length 120 feet, and 17 feet high in the clear, with two abutments of 12 feet thick each in a splaying direction, with a regular slope, and 16 ½ high from the bottom of the Gut or thoroughfare, from whence a wooden bridge is to spring and to extend across the Gut from one abutment to the other.
The arch to spring about 12 feet in the centre and to be double floored, with good two inch planks, the upper floor of oak and the lower pine, the sides and gable ends of said bridge to be closely weather boarded with quarter boards well lapped or grooved, the whole of the work of said bridge to be roofed with good and sufficient white pine shingles, said roofing to extend at each end 8 feet over the heel of the arch or top of the abutments. The abutments to be built on rock or otherwise firm foundation to be approved of by the Commissioners—From the back of the abutments the filling shall consist of earth and stones and to be supported with wing and speer walls on each side to the top of the filling, and walling shall meet the road with an ascent and descent elevation from the road to the bridge.—The undertakers to furnish all materials and to give such security as the Commissioners may require for the faithful performance of the workmanship and permanency of said bridge for and during the term of 7 years, on said day.
N.B. The Commissioners will also at the same time received proposals and contract for the building of
A BRIDGE
across Little Codorus creek, near George Louck’s Mill in Springgarden township.
Charles Diehl
John Volglesong
Philip Henise
Comm’rs.
ATTEST—Geo. W. Spangler, Clerk”

After the bridge was completed, which Lewis Miller captions as occurring in 1835, the commissioners delegated viewers to make sure it was constructed properly and was ready for traffic. Miller was one of the viewers for the Gut bridge, which he calls the Cud bridge. Miller says:

“The County Commissioners appoint[ed] three men to survey the new bridge over the Cud, near the river Susquehanna. The viewers were Henry Small, Lewis Miller, Jacob Gartman. Build by Jacob Laumaster. The Commissioners were Kimmel, Heneise and Peter All. And a company of old citizens from town, John Barnitz and Samuel Ritter, Charles Fisher, George Spangler, Jacob May, Daniel Willhelm.”

This link will take you to a letter to the newspaper questioning why Laumaster was awarded the contract on another bridge.

Where was this bridge? I’ll use historical maps in my next post to show the location.