1821 map of York and Adams counties is a real treasure 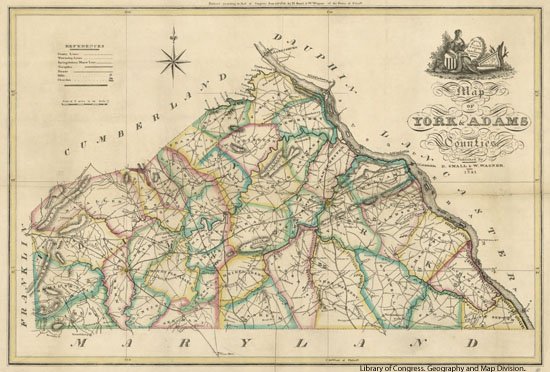 I have written before about York’s multitalented William Wagner. One of his lasting legacies as an engraver is the Map of York and Adams Counties that he published with Daniel Small in 1821. This map is still very useful today to locate sites important to our local history.

The map shows the major roads, townships and towns. Some mills, churches, ferries and taverns, all very important institutions of the period, are also marked. Working with this map and comparing it with later ones, such as the 1858 (Adams) and 1860 (York) wall maps and the 1872 Adams County and 1876 York County township atlases, can produce many “ah-ha” moments.

Besides having a very good copy of the 1821 Small and Wagner map on their website, the Library of Congress also has the original request for registration, written by William Wagner and signed by him and by Small. It reads:

York June 22, 1821
Sir,
I received your favour of the 19th inst. this morning and have according to your directions printed a copy of the title of the Map, which you will find attached to this letter. I have enclosed 1 dollar and 20 cents for the fees. A copy of the Map shall be forwarded as soon as they are printed. You will oblige me by sending the certificate as soon as possible as the printing of the Maps will not commence until it is received.
I am sir, very respectfully, your most obt. servant,
William Wagner

The letter is addressed to “D. Caldwell, Clerk of the District of Penna., Philadelphia.” It is endorsed with “No. 1219. ‘Title of Map of York and Adams Counties &c.’ Deposited 23 June 1821 by William Wagner and Daniel Small as proprietors.” This is somewhat noteworthy, showing that the letter not only reached Philadelphia the next day, but was immediately acted upon. It seems to have cost 25 cents to mail, so perhaps that was an early 19th century version of express mail.

The original map was hand colored along township lines. Very good black and white copies of the map, however, can be purchased at the York County Heritage Trust bookshop for a nominal price.

I’ll address a few more of the map’s features, sometimes overlooked, in a future post.