How much to ferry across the river Susquehanna? 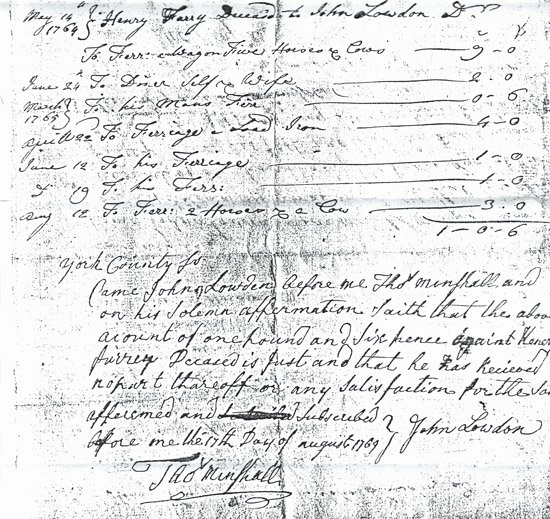 I’ve been getting good responses on my recent York Sunday News column on the fifteen or more separate ferries that crossed the river between York County and Lancaster County or Dauphin County. Perhaps that should be too surprising, since the earliest of these ferries date back to the 1730s and some of them operated into the 1920s. They were part of the everyday life of our forebears. If you wanted to get yourself, your family, your goods and your animals across the Susquehanna you would have had them ferried across for much of this period.

I haven’t seen too much on fees, so I was glad when friend David Hively shared some information about one of his ancestors, Henry Furry (Forry). Henry died at a young age, probably early in 1766, evidently leaving some unpaid ferriage charges dating back to his move to York County two years before. The creditor was John Lowdon, grandson of John Wright. According to The History of Lancaster County, Pennsylvania, Lowdon was running Wright’s Ferry at that time.

David’s research finds that Henry Forry of the Columbia, Lancaster County area, was about 21 when he bought land in Hellam Township in 1760. (David says the land is between today’s Route 30 and Route 462, near Mack’s Ice Cream.) On May 14, 1764 Lowdon ferried across a wagon and “five horses and cows,” for nine shillings, and then on June 24 Henry and his wife crossed for two shillings. There is also charges in 1765 of six pence for “his Man’s Ferr[iage]” (probably a hired man) and four shillings for “Ferr[iage of] a Load Iron.” David says that Forry was a blacksmith and farmer.

The other ferriage fees that year were for Forry crossing twice himself, and, on August 12 for ferrying two horses and a cow. Even though these fees were not paid until August 1769, John Lowdon received no interest, accepting the face value of the fees as charged several years before.

Original documents, such as this one, are invaluable research tools, allowing us to piece together the history of our area and the people who came before us, making them come alive.