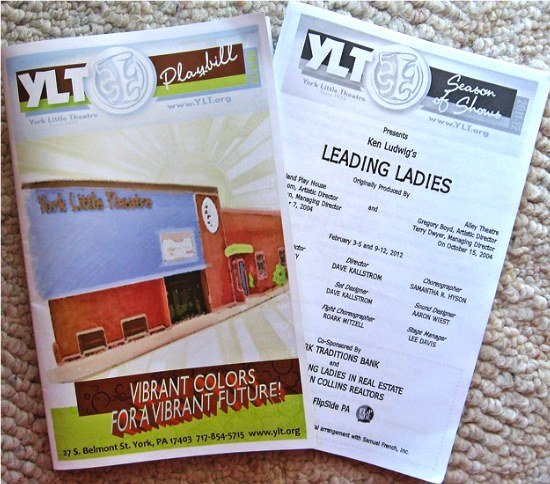 I was really pleased to see a packed house for Ken Ludwig’s Leading Ladies, his play set in York, Pa., at York Little Theatre on Sunday. It signals a great turn-around for the theater that was struggling not very long ago. The well-acted comedy continues tonight through Sunday. It was really easy to buy and print out tickets online, but you can also get them at the box office. I just checked the York Little Theatre website–there are lots of seats still available for tonight through Saturday evening–the 3 p.m. Sunday matinee looks over half-filled already.

Ludwig was present Sunday and received citations from Congressman Todd Platts, County Commissioner Chris Reilly and York Mayor Kim Bracey. I haven’t personally met Mr. Ludwig, but from what I have seen and read, he is really a nice guy who embraces his York County roots. Not bad for someone who has had half a dozen shows both on Broadway and on London’s West End theater district. He has won many honors and has been nominated for multiple Tony awards and Helen Hayes awards. Some of his best known plays include Crazy for You, Lend Me a Tenor and Moon over Buffalo. You can read much more about Ken and his work on his web site: www.kenludwig.com. I thought it was neat that the website features a link to a recent article by the York Daily Record’s Erin McCracken on his return to York with Leading Ladies. He is also accessible–he writes a blog and personally answers questions via the website. One I noticed was from a person that was going to be putting on Treasure Island, one of Ludwig’s adaptations, asking how you make a two legged person look like they have a peg leg–the questions was graciously answered with two options.

You might know that Ludwig was a successful attorney in Washington, DC before he became a full-time playwright. As far as I know, he still lives in Washington, not too far from “home.” He has advanced degrees from Harvard and Cambridge. His undergraduate degree is from Haverford College, and just yesterday, at the York County Heritage Trust Library/Archives, I found a paper he wrote at Haverford in his freshman year: “Playing with Fire: A Political History of York County, Pennsylvania, 1856-1861.” Using articles and election results from York newspapers of the day, it showed a local perspective on the anti-bellum Democratic party, split over slavery and tariff issues. I was glad to see he was drawing on local resources even then.

York Little Theater, founded in 1933, has an interesting history too–more on that later.