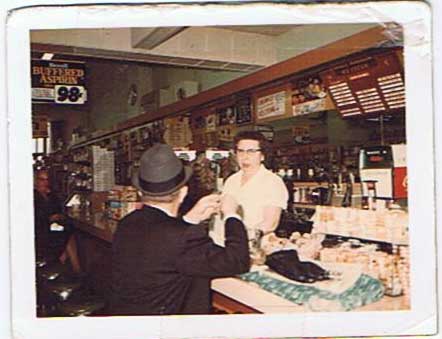 Today, I’d like to share a letter from Paul W. Thomas of the York area, who wrote to me about his memories of the former Ziegler’s Drug Store. I’d previously received the photo seen above from Wayne Breighner, depicting his mother, Alverta Breighner, at work at the store. (Read more about that here.)

Paul writes, “I was employed by Jimmy Ziegler right out of Pharmacy College in 1951 and left shortly before the store closed. Ziegler’s was established in the mid 1800s. It was a neighborhood store. In that line, in the spring we always had a large assortment of gardener seeds that we sold to the Farmers Market people. We also had herbs to season sausage, ‘pudding,’ bologna, etc. and always carried in stock ‘Bag Balm.’ Early on, no air conditioning, so we had a huge refrigerated case to keep our ‘Whitman’ Candy fresh. We had a tobacco area; cigars, cigarettes, pipe tobacco… Also a small cosmetic area. The prescription area was hidden behind a partition at the rear of the store, as was true of most stores at that time.”

He continued, “The soda fountain had a marble top and about 10 stools in front. We had Dolly Madison Ice Cream, at that time very high butter fat, very rich in taste. It was sold ‘hand dipped’ or half-gallon packages. We made our own chocolate syrup and marshmallow topping and we always used Mike’s Nut Shop salted peanuts for the sundaes. Banana Split $1.50, ‘Coke’ we could flavor with vanilla, lemon, cherry, chocolate, and aromatic spirits of ammonia. We used Bokar black bag coffee at 5 cents a cup. Coke also was 5 cents and 10 cents a glass. Later on we put in prepared sandwiches that we toasted in a ‘toaster oven.'”

Paul also notes, “In addition to the fountain, we had two small tables with glass tops you could look through as a display of items below. Beside each table were three heavy wine, three-legged chains with a triangular seat. Edith Ritz and Miriam Hamme, and later Alverta Breighner, tended the fountain during the day, and we always had high school boys at night and weekends.”

“Later, we remodeled the store, and had a waiting area, inside the front window of the store. Kept the fountain the same, but lost the tables and chairs. We were a Renall Store (orange and blue sign). Remember the 1 cent sale? I’ve rambled long enough.”

Paul, I’m so glad to hear these memories! Does anyone else have a Ziegler’s memory to share?