Living at the YWCA in York 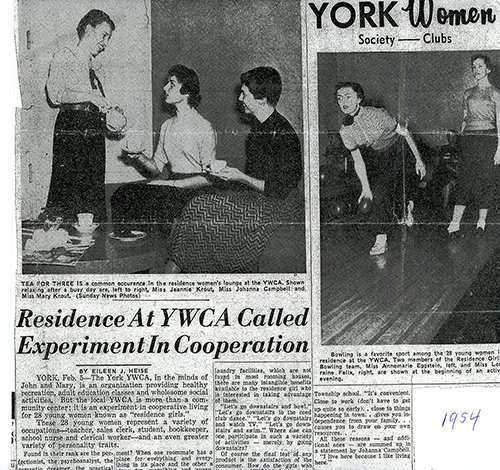 Annemarie Baker of West York shared the 1954 newspaper clipping seen above about the YWCA.

She wrote, “I came across this one in my box of old stuff. The original is rather brown by now. I am wondering how many people remember the old YWCA the way it was then. It was a place where young women that worked in York, but were away from home like myself (immigrant) could rent a room. Everybody had a roommate. It was a great place with lots of activities and little time to get home sick.”

She continued, “Mrs. Harriet Smith was director and room mother. There were strict rules. Curfew was 11 p.m. during the week, midnight on weekends. I am glad the Y still exists although it has changed with the times from what I hear. No more rooms!”

She concluded, “Being a resident of the Y gave us a nice discount at the YWCA Cafeteria on E. Market St., and the food was good.”

I’m interested in any other memories from local residents who lived at the YWCA or YMCA at any point!