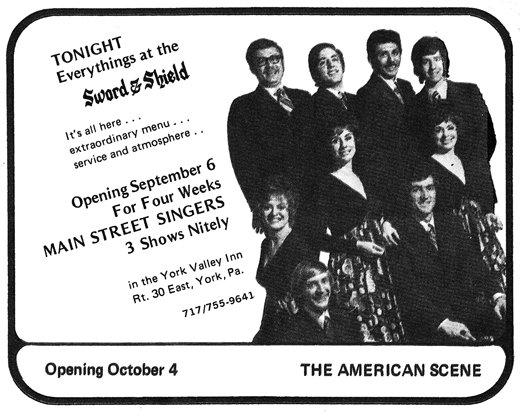 This advertisement from former York restaurant the Sword & Shield at the York Valley Inn was from a 1971 edition of "This Month" magazine and was submitted by Regina (Tufarolo) Altland.
Posted by Joan ConcilioMarch 14, 2019March 10, 2019 Central/Eastern, Local memories, York City/SuburbanNo Comments

A couple of weeks ago, reader Beth Scearce asked if anyone remembered a restaurant in the other direction – around the 3900 block of East Market Street – that was attached to a motel and known for its Sunday buffet.

I can’t believe I didn’t place what she was referring to right away; thankfully, many readers were able to jog my memory quite quickly!

As they all told me, it was almost certainly the York Valley Inn and its restaurant, the Sword and Shield.

Reader Brenda Raffensberger of Red Lion shared with me the Sword and Shield name, and wrote that it was part of “the good memories many of us older York-area residents have of the many great dining venues we have enjoyed in York County.”

“It is sad that so many have disappeared,” she noted. She also wanted to make sure I gave credit to her husband, Jim Raffensberger, for knowing the Sword and Shield answer!

I also heard from Darin Green of East Prospect, who wrote that Beth “may be thinking of the York Valley Inn. My wife and I went there for the seafood buffet before we were ‘my wife and I.’ it was very good and reasonably priced. This was about 25 years ago.”

Ron Ellis wrote to confirm the York Valley Inn and Sword and Shield names, and added, “I know that there was a fire there and it destroyed both the motel and the restaurant.”

And reader Scott C. was able to give a few more specifics; he wrote, “The York Valley Inn was located at 3883 E. Market St. and operated as a Quality Inn franchise. It closed in the early 1990s and has since been demolished. The restaurant was called Sword and Shield.”

And finally, I heard from longtime YDR coworker friend Deb Hummel, a fellow copy editor and longtime York County resident. She wrote, “The motel at 3900 E. Market St. was the York Valley Inn. Its restaurant was the Sword and Shield.”

Deb describes that one: “The original York Valley Inn is the stone building now located at Susquehanna Gardens memorial/cemetery. That stone building was originally located on a two-lane East Market Street, approximately sited along the road at the signal light for Wal-Mart; the Inn was also on the same side of the street as Wal-Mart.”

That York Valley Inn was built in the 1730s – unlike the one that housed the Sword and Shield restaurant, which opened in 1958! The name confusion has confounded the county ever since then; in fact, I can guarantee you that when this column is published, as with every time I write about these businesses, someone will write and swear that I have things wrong/backwards/confused. But YDR editor Jim McClure has been setting the record straight on this for years and I’m just carrying that baton!

(You can read much more history of both at https://yorkblog.com/onlyyork/ye-olde-york-valley-inn/.)

At any rate, that was a very long answer to Beth’s question, but a fun road to go down! I hope everyone enjoyed talking about the Sword and Shield this week!