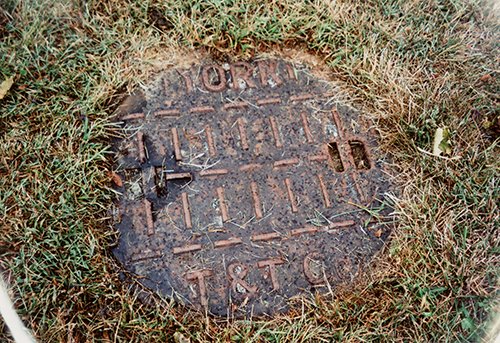 Just a quick question today based on this photo, which Bob Finke shared of a metal cover he found last fall in Spring Grove borough.

“It’s located in the ground very close to a utility pole, measures 24″ in diameter and has the lettering ‘York T & T Co’ on it,” he wrote.

“Perhaps your research and/or knowledge or that of your readers may be able to shed some light on its history and date of utilization.”

Interestingly, my first assumption was T&T like dynamite, but I think what this actually is, was a manhole cover from York Telephone & Telegraph. I found a 1947 page from the YDR’s predecessor, the Gazette and Daily, that mentions York T&T as a short name for that company, which installed York’s first dial telephone in 1919!

I’ve written previously about that company here; in fact, it’s a several-generations-earlier predecessor to Verizon. It had the York T&T name from at least that 1919 era into the late 1950s, when it was purchased by General Telephone.

As to specifically the use of this plate near a utility line, I can’t say for sure, but it seems likely that it marks the (former) phone company’s access point for its lines in some way!

Any further information for Bob?