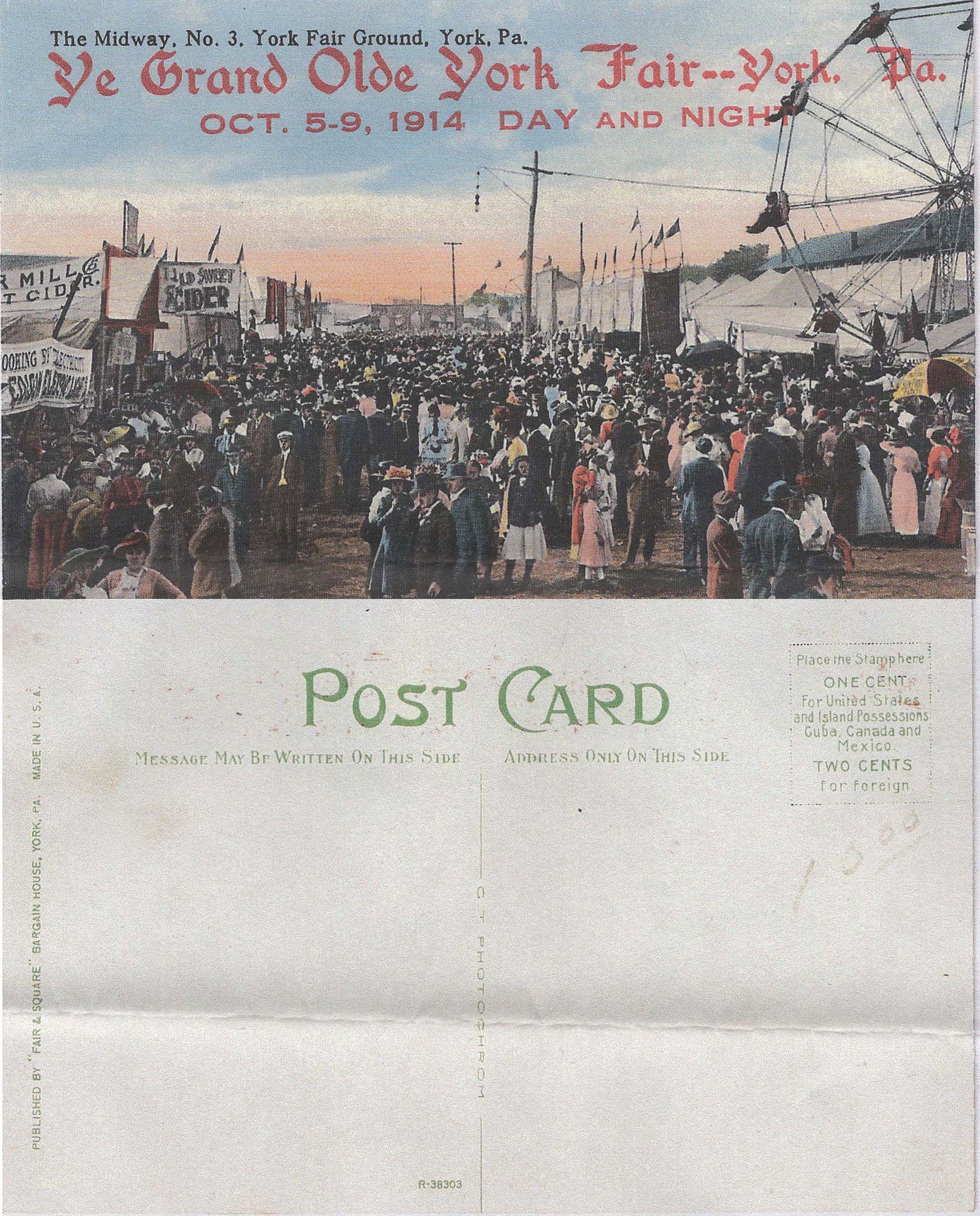 Cindy Roach of Dover Township shared the front and back images of a 1914 York Fair (or Ye Grande Old York Fair, as it was called at the time) postcard from her extensive postcard collection. The Fair was held in October during the early part of the 20th century.
Posted by Joan ConcilioSeptember 24, 2019October 26, 2019 County customs, Local memoriesNo Comments

In last week’s column, I shared a copy of a 1908 York Fair postcard from reader Cindy Roach of Washington Township.

I mentioned that I had another Fair card from Cindy as well as some additional information on her postcard-collecting this week, and I’m excited to share that. I also want to wish Cindy a happy birthday! She wrote to me after last week’s column and told me seeing her postcard and information was a good surprise on her special day. So here’s to part two, potentially the icing on the (birthday?) cake!

One impetus I mentioned last week in sharing these two cards of Cindy’s is that they showcase a non-September time period for the fair. Last week’s 1908 card was notable in that several readers had shared versions of it with me; in the case of this one, enterprising Only in York County assistant Chris Otto, the former YDR sports editor who writes the ephemera blog Papergreat, has another card from the same series that he wrote about previously; you can see that at yorkblog.com/onlyyork/faircard. (Where Cindy’s card is “The Midway, No. 3,” Chris’ is “Bird’s Eye View, No. 2.” I wonder if someone in York has “No. 1” to tell us what background that is!)

Cindy wrote about her card, “As you can see, the Midway was packed with people, and look at all the ladies wearing hats. This card is in ‘mint’ condition, meaning that it was not stamped, postmarked, written on… and has no tears, creases, pinholes or tape or paper residue from formerly being in an album. Many people who collected postcards glued them in an album, then when they were removed from the album, either the tape or album paper the card was glued to remained on the back.”

She continued, “I paid $10 for this card, but I don’t know how many years ago… This card was published by ‘Fair & Square’ Bargain House in York, Pa., whereas the other post card” – the one from last week’s column – “was printed in Germany.”

Cindy said she has about 90 York Fair postcards in her extensive collection; while some are duplicates, most are not. “I’m sure there are many more York Fair postcards out there that I don’t have,” she noted. “I have been collecting postcards most of my life, starting when I was about 13, and I am now approaching retirement age, so I have been collecting all of those years.” She said that since her son grew up and moved away a few years ago, she has turned his former bedroom into a postcard archival storage room holding her collection, which she said is between 25,000 and 30,000 cards – “which is not a lot compared to some people’s collections.”

Maybe not, Cindy, but it sounds pretty impressive to me! Cindy added that her favorite cards to collect are “linens,” which were published from 1930 to 1945 and have vibrant colors and textured paper. She also said she doesn’t search for cards on the internet! “I prefer to hold, look at and see the postcard in my hands before purchasing it,” she wrote.

As a final note, while talking about York Fair memorabilia, Cindy recalled that during the Fair’s 250th anniversary celebration, they had a display of former promotional items. “In one of the showcases was a miniature wooden rolling pin stamped with ‘York Fair’ and dated 1955. Since that was the year of my birth, I would love to locate and purchase one of those little rolling pins!”

So, if anyone has one, please let me know and I’ll put you in touch with Cindy, who would be thrilled!