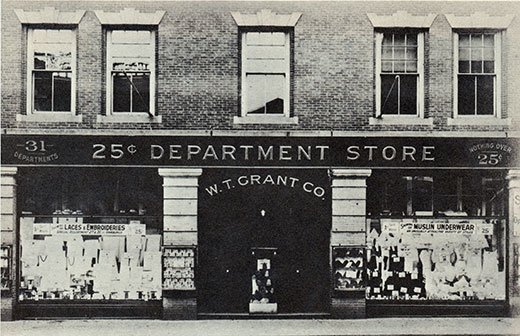 This image of W.T. Grant's Department Store came from a pamphlet provided by reader Nancy Stong, compiled upon the death of Mr. William T. Grant. The caption provided on this photo notes, "Mr. Grant invested his life savings of $1000 to open this, his first store. The year: 1906. The city: Lynn, Massachusetts." York County would later be home to several Grant's department stores.
Posted by Joan ConcilioMarch 25, 2018May 7, 2018 Local memories, York City/Suburban

It has been just about two and a half years since I last wrote in detail about the former W.T. Grant department store chain. In the intervening time, I have received MANY letters with memories on that topic, and today I’m excited to share them with you.

First today comes a letter from Sheila Myers, who writes about Grant’s: “My mother was employed at the downtown store for 27 or 28 years, right up to closing day. She was the manager of the Infants and Children’s Department and had generations of customers of the same families. Often we would be out and about and they would come up to her and hug her. She was loved and respected by many.”

Sheila continued, “Also well known to many Yorkers was Wayne Thomas who was their window decorator and a local gospel entertainer. Mr. Nelson, Store Manager, was indeed a strong manager; he knew how to run a retail business. But the most important thing of all was the ‘sisterhood’ that prevailed among the clerks. They were great with customers and helped each other outside the store when needed. These gals were joined at the hip and the camaraderie was never broken. They were great card players (500 to be exact) before work began, on their lunch hour and any time they could find a place to play. I had them at my house periodically.”

She concluded, “There are two known, by me, ladies still living and they are in independent living facilities here in York. There may be others I’m not aware of. I loved that store and the ladies that ran it. I’ve never known of any other ‘sisterhood’ like theirs… Thank you for caring. It was a great store at a wonderful time in our lives.”

I do hope that is still the case, since Sheila’s letter came to me back in 2015 when I most recently wrote about Grant’s!

I also heard from Gussie (Reid) Ritter, who was well-known as a window dresser in the area.

She recalled, “I remember W.T. Grant very well. I have items I bought from there. One W.T. Grant store was in the then-York County Shopping Center, where Ben Franklin craft store later was (now York Marketplace). Then it moved way out on East Market. I still have a W.T. Grant Credit Card.”

Gussie said she worked in that shopping center and remembers many of the stores there!

Another letter came from Diana Chronister, who wrote, “I was… talking to a friend about my first job, which was W.T. Grant. I worked there from June 1973 to September 1975. I worked at the Delco Plaza one. I met my husband there. I worked in the candy department and he worked in the camera department.”

Diana mentioned that previous columns had included people who recalled having to take a math test to work at Grant’s, but neither she or her husband recalled such a test. She also added that in the ’70s, many stores were not allowed to be open on Sundays; “I remember the Delco store tried it and got a fine,” she noted.

She concluded, “There were three W.T. Grant’s in York – one at Delco Plaza, one at East Market Street… and the last one South Queen Street and Tyler Run Road. Delco Plaza Grant was the last to close in the York area. I had fun thinking about it and remembering back 40-some years ago.”

And finally for today comes a treasure trove of information courtesy of Nancy Stong, who wrote to me on W.T. Grant Company letterhead! Nancy mentioned that in a previous column, I said I did not have a photo of Mr. William T. Grant, the store’s founder and namesake. She was very kind and shared with me a large trifold pamphlet about Mr. Grant, which I believe was created upon his passing in 1972 as the cover includes a large photo and the inscription “William T. Grant, 1876-1972.”

You can read the whole pamphlet at goo.gl/NxJyDp.

Nancy also wrote, “I was an employee of Grant’s, starting at the age of 16 and worked at stores in Lancaster and York counties for most of the next 25 years.” She said she is about the age of the mother of Rami Norris, who had written with Grant’s memories in a previous column, and like Rami’s mother, Nancy said she also got one question wrong on the math test for employment. “It was: How many sheets of paper in a ream? Not sure if it would ever come up in one’s workday and I’m sure it was covered in school, but it did not come to mind on test day.”

She mentioned she also has Mr. Grant’s autobiography, written in 1954, “Mr. William Grant’s own story of his early days.” That must be very interesting as well!

Nancy, thank you for sharing this great info, and thanks to everyone else who was willing to share their Grant’s memories with us!

Previous posts on this topic