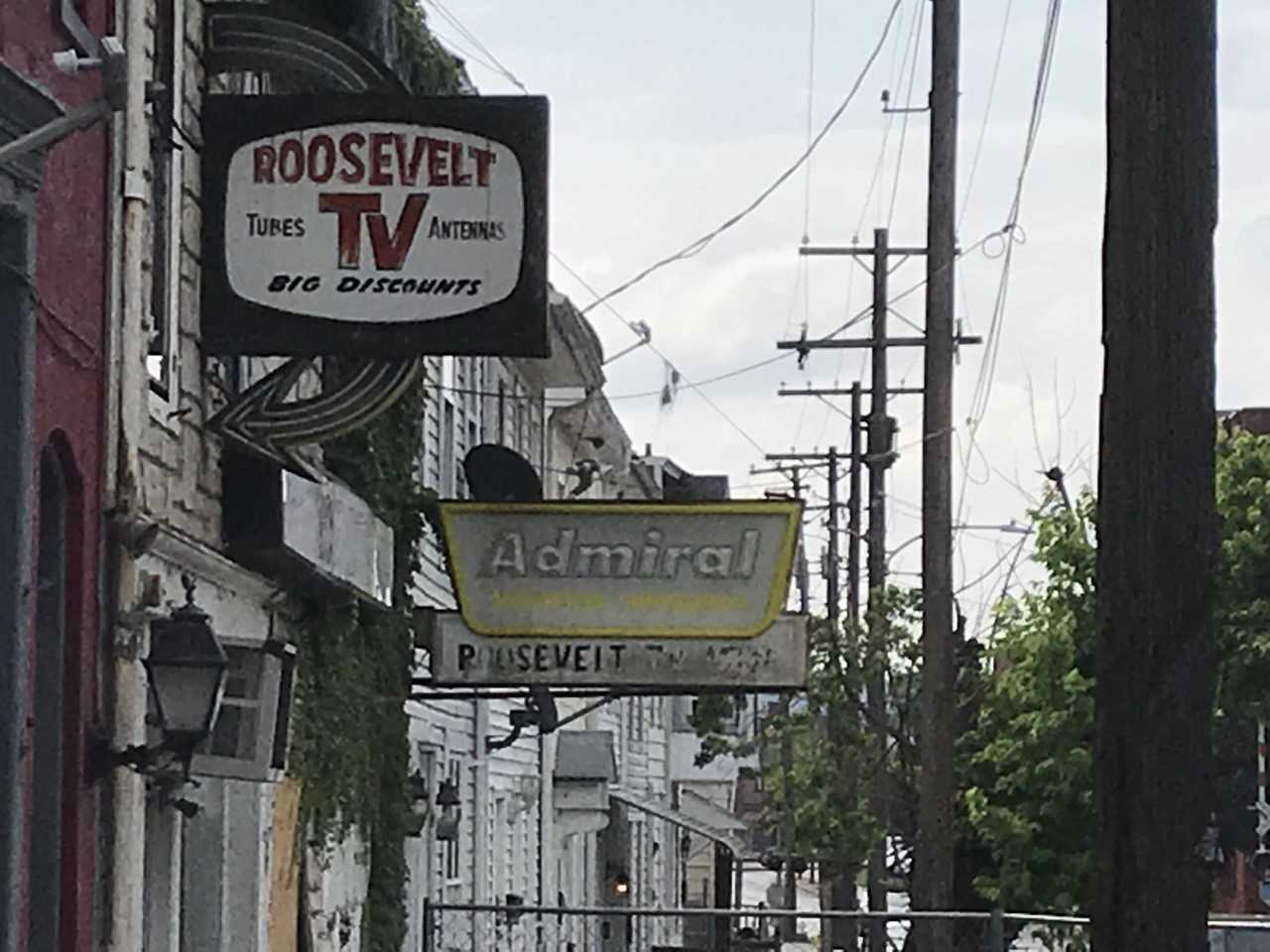 Roosevelt TV Supply, Eugene Wise's business for many years, was torn down in June 2019, though its iconic signs, seen in this photo by the YDR's Mike Argento, were saved.
Posted by Joan ConcilioNovember 21, 2019 Local memories, York City/Suburban1 Comment

Memories of the Wizard Theatre and more from Eugene “Bud” Wise

In mid-2017, longtime reader Sis James had written to me asking for any reader memories of the Wizard Theatre, as she had seen a postcard depicting it that was auctioned off. She said the Wizard was across the street from the Yorktowne Hotel, where the parking garage is now, in the 1920s.

“You probably will not get any feedback on this due to the time it was in York,” she had written, and my guess was that she was correct.

However, I didn’t count on getting a letter from longtime reader Eugene “Bud” Wise. He has helped me in the past with some history from the ’30s, and, it turns out, had much to offer regarding the Wizard.

He wrote, “You had the right place, below the ‘club’ at Market and Duke across from the Yorktowne Hotel, that had some silent films only. Stars such as Charlie Chaplin, Clara Bow… The theater had church pews in the first two rows; there were three aisles of seats.”

Bud continued, “I lived at 526 S. Duke St. and we joined the locals about 6 p.m. on a trek down to see the latest at the Wizard. On Monday nights they gave everyone a free gift. ‘Dish’ night was possible – everyone got a free dish. We’d go past Jake Smith’s cigar store at Duke and Maple – he was known for his homemade vanilla ice cream.”

He added about the ice cream, “People would come there from as far as Baltimore for it – a nickel cone would stick to the roof of your mouth and coat it.”

As he continued his walk to the Wizard, he wrote, “I remember going through the tunnel of wood when they built the Yorktowne so you wouldn’t be hit by falling bricks while they built it.” (For the record: The hotel opened in 1925.)

Of the Wizard, Bud wrote, “Ed Casey was the usher and the piano player had music sheets supplied by the film to play.” It did not last much longer, however; he wrote, “Finally, it was closed, and for some time they had a banner across it that read, ‘We’ll be the State Theatre in 1928.'”

“York also at that time had about seven other theaters,” he noted – “The York Opera House at Beaver and the alley between Market Street and King Street; next door was the vaudeville house that played vaudeville shows.” (This was almost certainly the Orpheum, or at least later became the Orpheum, as that’s definitely what is always shown as the next-door neighbor of the York Opera House!)

He continued, “The opera house on the corner had three different floors. They had first, second floor balcony, and also had a third floor that had a separate entrance. It was about seven rows of church benches… I saw Houdini the magician there. My favorite magician was Thurston,” he said, referring to Howard Thurston, an illusionist from Ohio who had an immensely large stage show.

“Back to the Wizard,” Bud continued, “They had short pictures before the main. ‘Our Gang’ was one, and a 7-year-old boy had a comic called Mickey (formerly McGuire) who may have been a young Mickey Rooney. That’s the way it was billed.”

He also recalled other theaters – “The Scenic was a silent film house that later was the Ritz Theatre. The Hippodrome, known as the Hip, was later the Rialto. The Jackson was later the Capitol. The Strand, build in 1925, was always the Strand.” (With both now known under the collective umbrella of the Appell Center!)

“The Scenic was always a theater that played silent movies,” he recalled. “They had such stars as ‘Hoot’ Gibson, William S. Hart, Tom Mix and Yakima Canutt, who later became a Hollywood stuntman in the ’30s.”

And, he noted, “There were several theaters in York before my time. The Alhambra was one in the first block of West Philadelphia Street.” (If you’re interested in learning more about these former theaters, by the way, I can recommend the great website Cinema Treasures at cinematreasures.org. There, readers have submitted photos, newspaper clippings and more for many of these places.)

Finally, Bud concluded, “To give you my time in York – I was born on Duke Street Sept. 23, 1919.” One thing Bud didn’t note in his letter, but that I think is important to mention, is that he was the longtime proprietor of the former Roosevelt TV Supply in York, an institution I would argue is on par with the theaters he recalled today in how well it was known around the county for many, many years.

Bud, thank you so much for sharing these memories with us, and for all of your contributions to York over the past 100 years. It is my pleasure to be able to help document these theaters thanks to you!