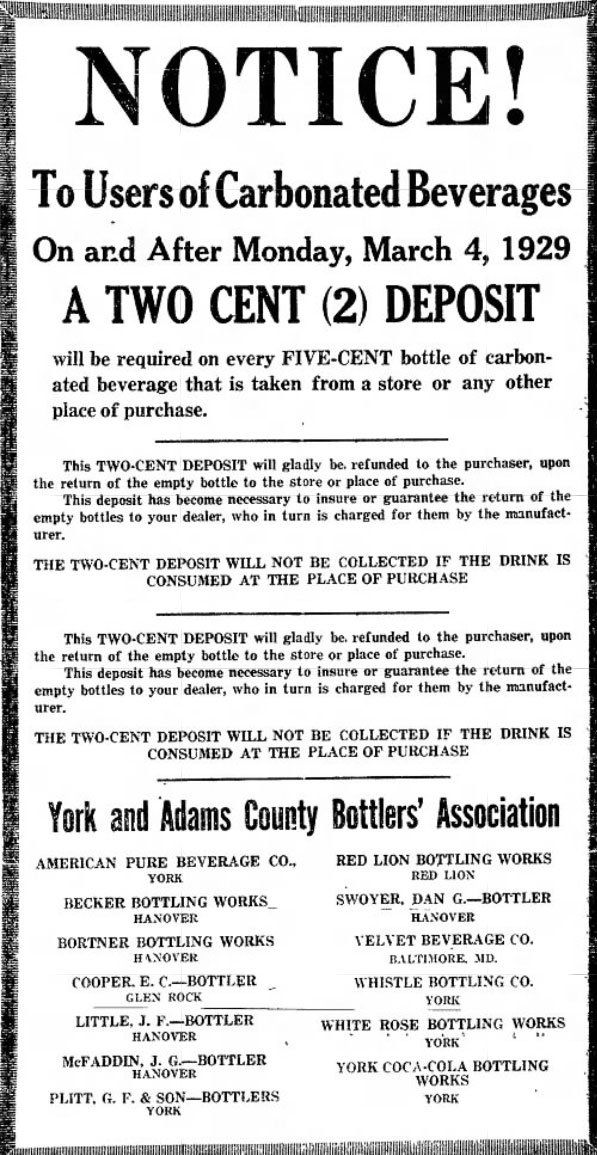 This notice that includes the name of White Rose Bottling Works as part of the York and Adams County Bottlers' Association was published in a 1929 edition of the Gettysburg Times.
Posted by Joan ConcilioNovember 12, 2019 Ask Joan, Local memories, York City/SuburbanNo Comments

Not very long ago, I had a letter from Diane Imler, who wrote, “I have had a quart jar of White Rose Bottling Works, York, Pa., bottle caps for several years. They are Pale Dry Ginger Ale with cork inserts. I have tried searching for info on this and have found nothing. Do you have any info on White Rose Bottling Works in York? I’ve lived in York all my life and can’t remember anything about it.”

Well, Diane is right that info is hard to come by! The most specific thing I found was a 1929 clip from the Gettysburg Times newspaper, which listed the members of the York and Adams County Bottlers’ Association at that time as the signers of a large notice regarding a two-cent bottle deposit taking effect for any five-cent bottle of carbonated beverage not consumed at the place of purchase.

So, we know the company was in business in 1929, but I don’t have much more info than that! I would love to hear from any readers who can shine more light on the company.

A few weeks ago, I shared a note from reader Bob Moffitt Jr., who was curious about shopping memories from before the time of “superstores” like Walmart. In that column, Bob, who is 38 (approximately the age of your trusty author!), talked about the West Manchester Mall before Walmart and was curious about the general shopping environment around York County.

Not long after that column, I heard from Joyce (Hoover) Hertz.

Joyce wrote, “I grew up in Spring Grove and downtown York was the place to shop from Beaver Street up to George Street on Saturday mornings. My parents would take my younger sister and I to Central Market lots of Saturday mornings for fresh meats, fruits and vegetables, and on some Saturdays, my Dad would take a friend and me and drop us off to wander among the shops downtown and my friend’s mother would pick us up later.”

She noted that there were several major department stores:

Joyce, I appreciate all those memories! I received several others in response to Bob’s letter and hope to share those as soon as possible.