Today, I have a selection of miscellaneous memories to share from letters I’ve received. No theme, no huge unanswered questions, some some fun recollections of life in the past in York, PA.

Don’t forget that you can always share your memories on these or ANY York topic you recall by emailing me at joan@joanconcilio.com. I can’t always reply individually but I do try to share as many letters as possible!

Reader Barbara Roth of Windsor Township wrote about a particular Christmas tradition in York I’d previously shared thoughts about. She says, “I, too, remember the ‘hide a line’ that was done at Christmas time in York. … What I want to share with your readers; does anyone remember going to the basement of The Bon-Ton at Christmas time to see Santa Claus? You sat on his lap and told him what you wanted for Christmas, then you were given a quarter-sized badge with his picture on it and the Bon-Ton name. I had mine for a long time. I got rid of it some years ago. They are now hard to find. I surely wish I still had mine. Also, in the basement of Bon-Ton, there were metal tubes that you money was put in by the salesperson. It then went up that tube to an upstairs office. It was sent back with change, if there was any.”

I recall hearing about those pneumatic tubes before, but not the Santa badges! I wish I could see one; anyone have a picture to share?

It hasn’t been that long since I last wrote about the Grant’s department stores, but I had a memory from Gloria Shelby of West Manchester Township that I did not share at that time but meant to.

In response to previous Grant’s articles, she wrote, “I read with interest, as I worked there, also my mother and my youngest son. My mother worked there about 1937-38. Manager, Mr. Henry Nelson – 42 W. Market St. I started there when I was 16 years old in Sept. 1948, I worked with Gladys Blouse at the electric department and Christmas decorations. I bought a manger scene, although Grant’s didn’t have all the parts, so I bought the rest at Woolworth’s.” Gloria said she still has the manger and had it on display in her kitchen picture window during a recent Christmas!

She added, “I continued working there during my high school years 1949, 1950, part time on school days, full time in the summer. I married in 1951 and continued until Feb. 1952 I followed my husband (Air Force) to England. I worked in every dept. except the lunch counter. I came back in 1954 and worked there to August 1955. Mr. Henry Nelson, manager, was a very nice person. My son worked at the Grant’s store in West York during 1974-75. … When I worked full time, I had the hardware dept.” 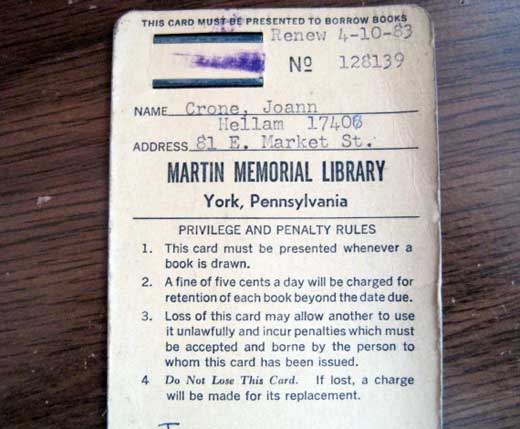 Reader Gloria Gotwalt of Springettsbury Township wrote after seeing the image above of a former Martin Library library card, shared by reader Joann (Crone) Hano a couple of years ago.

Gloria wrote, “Your story on Martin Library brought back memories. I found my library card and it was renewed March 20, 1976. My fine was 2 cents a day and if lost it would cost 5 cents to replace it. I never noticed it but my card was listed as Ms. Daniel Gotwalt instead of Gloria. I would gladly give it to the library if they want it.”

York County’s butcher shops are a topic that I cannot seem to keep up with! Every time I share one memory, four more come in, and in addition to the one I’m sharing today, I have probably a dozen more I’ll have to make time to write about soon (so if you’ve shared a butcher-shop note and not seen it, bear with me!)

Don Runkle of York Springs writes, “I had a butcher shop in mind and wondered whether it would be mentioned … A lady, I think her name was Fran Stump, said she thought there was a butcher shop at the corner of S. Duke St. and East Maple St. called Hamberger’s. To set the record straight, I think this will help her. She is right there was Hamburger’s Butcher Shop. I grew up at 510 S. Duke St., and the butcher shop was, if not mistaken, at 526 S. Duke St., which would put it about the middle of the 500 block of S. Duke St. and E. Maple. There was a cigar store, a grocery store, and a clothing store.”