Today, I have yet more memories to share about Valley View Park, a popular music destination in the 1940s and beyond in eastern York County! If you haven’t already, I encourage you to check out these earlier posts on the park before reading on!

And now, for some more memories of Valley View, including some from the Fincher family!

Evelyn L. Wueschinski of Dillsburg wrote after seeing the above picture published previously, “It surely did bring back memories to me. I know all their names. The group is called ‘The Prairie Pals,’ except for the 2 girls with the white dresses on. They are called ‘The Cackle Sisters.’ Their names are Mary Jane and Caroline Dezurik. Shorty Fincher is on the end, and his wife Sally is on the other end. The two guys in the middle are Clyde Fogle and Johnnie Huey. The man in front kneeling is Hamilton Fincher. He is the comedian and Shorty’s brother. He is called Rawhide. I played my guitar and sang and yodeled there with a country and western group I was with. Shorty and his group were there and said to me I was a good yodeler, that’s how I know them. That’s going back a long time ago.”

Paul J. Fincher wrote, “Hi Joan, I am a grandson of ‘Rawhide’ Fincher. I have someone who lives in York and sends me articles about Shorty and Valley View Park. Growing up with my grandparents, I knew Pap loved telling jokes and singing but never knew about his involvement with country music until later in life. I am interested in any stories or pics that I can find, some have been found on eBay. I am so happy to hear that people remember those days. I do remember meeting Clyde Fogle and his wife Lilly Mae, they stayed friends for many years. … I miss my grandparents a lot, I never realized the life they lived.”

Paul added, “One small story I remember is this: I spent summers with them when I was about 12 to 15 years old. I went through a dresser drawer and found all these signed pictures from Valley View Park. The pictures I remember were from the Three Stooges, Grandpa Jones, Minnie Pearl, Roy Rodgers and so many more… I do not know what happened to them. My son has been finding items on eBay and has been giving them to me for gifts, stuff I never saw before. All I can say is ‘Rawhide’ NEVER lost his passion for making people laugh and loved to play his guitar and sing.” 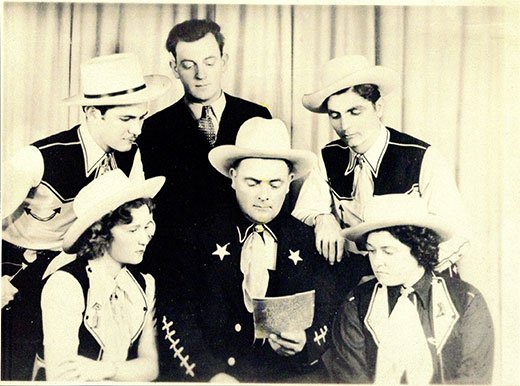 Reader Robert Hollinger shared the photo above and noted that Sallie and Shorty Fincher, who ran Valley View, “lived one house away from me when I was young. I spent a lot of time at their home; they treated me like one of their family. They would often take me along to the park and I would get to meet the performers. It didn’t seem like a big deal to me as I was between 8 and 12 years old and country wasn’t a big deal to me back then. I do remember meeting Brenda Lee, though; I thought she was pretty hot.”

Robert continued, “One of the vendors wanted to take a break, so he asked me to watch his stand while he took his break. He had the ducks that had numbers on the bottom that matched the prizes on the shelves. Brenda Lee wanted to win a doll so she begged her grandmother to let her play. Her grandmother told her she would not win the doll, but after she continued to beg, she let her play. Well, wouldn’t you know, she won the doll, which made her very happy and so I felt pretty good also until the vendor came back and noticed the doll was missing. It turned out there wasn’t a duck with that number on it so he was quite upset with me and went to Shorty to complain. I remember Shorty defended me and was very upset with him for not having all the numbers on the ducks. Shorty was an honest, straight shooter and didn’t want any vendor to work at the park who would cheat anyone.”

Finally today, I want to share a question that came up on a previous Valley View post, though I can’t be sure it was directly related to music at the park or just to country music in general at the time.

A reader who didn’t give a name asks, “Any info/pictures of Slim and Ginger? Sat by the radio as a child and loved them. I don’t remember the name of their group. I remember there was a tall thin man playing the bass. I heard them at my great uncle’s on the radio. Thanks for any and all info and pictures you can find.”

Any information would be great – and thanks to all who continue to keep the story of Valley View Park alive!