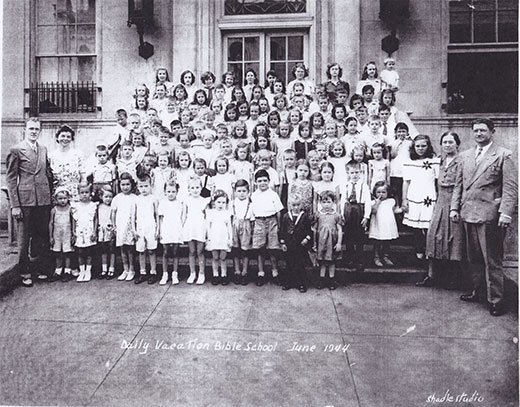 It’s the end of July – and that means many of the churches in the area have already had their VBS programs, and others will be taking place in the next week or two! To celebrate, I have a photo from a 1944 Daily Vacation Bible School shared with me a couple years ago by reader Jean Fix, as well as some great details on the program and the people pictured.

I also have a great letter with some questions about York’s airmail service and more. I hope you’ll enjoy both!

Jean wrote about the photo, “The enclosed DVBS photo was given to me by Linda Harbaugh Smith. Since we lived in the same York City neighborhood (Smyser and Penn streets) she thought I would know some of them.”

I believe Karl Jacoby is someone known to me as a barber in the Shiloh area, and some of those other names sound familiar too. If anyone can identify anyone else pictured, I’d certainly love to hear!

Jean also added, “A subject that would be fun to remember are the May Day Festivals at schools and block parties with streets closed off for roller-skating, food, etc.” She said Smyser street was often so closed, with Garfield School at the corner of Penn Street. “My remembrance is that is how I got a cat,” she noted. “I asked my mother, she said yes because she thought it was a glass one. A lady had a box of kittens for sale and for one May Day ticket you could buy one. Named her Phoebe.”

Also, Jean included a note about a song and game that was played at the Garfield School May Day Festival. It was called “Molly Molly May” and was sung at the school’s fiestival sin the late 1930s to possibly the 1950s, Jean recalled. “Participants form a circle holding hands, with one standing in the middle, walking in a circle singling the Molly Molly May song.”

As best as Jean could remember, the song went like this:

Jean noted the sequence may be wrong, but she and I would love to know more if you recall this game!

Also today, I have a letter from another reader name Jean, this one Jean Scantling of Wrightsville. Jean asks, “Can anyone tell me anything about York’s airmail in the early 1940s? I graduated from William Penn in 1948. We rode Leiphart Bus from East Prospect to school. Bus left East Prospect 8 a.m. and got to William Penn always at least 10 minutes after first class started, which did not sit good with our teacher. We saw mail being dropped from an airplane coming downhill from Eagle’s Nest. A small airplane dropped a package that was attached to a cable out of the bottom of the plane. It was at that time a small field west of Eagle’s Nest. I can’t remember if it was every day. It was to our south as we were coming into York, probably about 8:20 in the morning. We would see the cable drop to someone on the ground, then new package put back on and pulled into the plane. Just curious.”

I’d be very interested in hearing more about the airmail of the time, so if you do have any information, please be sure to share!

Jean also wrote to me about some other things she recalls, such as the Washington House in Wrightsville, which we’d last talked about way back in 2015. Jean said she went to the Methodist church across the street, and noted, “After preacher said last amen, and sometimes before, older members started out the front door to see who could get to Washington House first for lunch. We, having small children, sat there and laughed and often tried to see who would get out the door first. Fun for us to watch. There was also a Washington House in Bainbridge, Lancaster County, run by the same Himmelroth family,” she added, noting the Bainbridge location as smaller.

“In Wrightsville, Martha Scantling was cook (Aunt Martha to many) and also aunt to our family. She made the best chicken potpie with dough squares and potatoes, best Harvard beets and best pies. In the mid-1960s, my husband and I were distributors for York and Lancaster newspapers; Washington House had papers laying on counters next to cash register. I had to collect for papers every week since my boys were not allowed in at their age.”

Finally, Jean noted, “Going back to 1938 or the 1940s, we played a game called Katydid – anyone know anything about it? We took a small branch off a tree (always seemed to be trees on the playground) about 6 inches long. Most boys carried a pocketknife at that time. Took knife and stripped bark off and put a pointed end on each end. Drew a circle in dirt and hit this Katy with a stick – don’t know where they got that stick, but hit the end and tried to get either in the circle or out of the circle – but I don’t remember any rules.”

I’d love to hear more about this game as well!