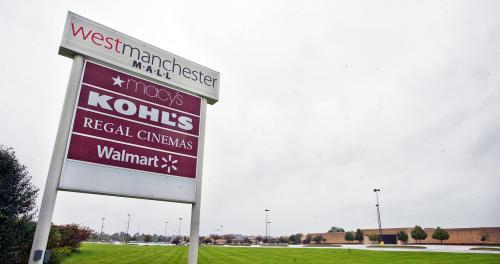 The West Manchester Mall through the years

My February post from commenter Frank Soyke‘s memories of the original West Manchester Mall stores sparked some other memories of that mall and its changes through the years.

Blake Stough was able to confirm what I remembered, that the bank at the end of the mall near Kohl’s now was a York Bank. He adds, “There was also a D.E. Jones and I believe a Walden Books (or maybe another book store). Tyler’s was a skateboard/surfer/preppy type of store that sold clothing, skateboards, etc. I remember going to the mall with my mom, and she would give me $5 for the arcade while she went to Bon-Ton. I’d always search for her for more money. Am I correct that there was also a fitness club there with a swimming pool, I believe where the movie theater is today?”

Mike Roseberry agrees with that. He writes, “I remember Fitness America as the gym (in the mall) … and the Camelot Music store … Bonanza was also there (where the movie theater is now). I think all of my friends called it ‘The Shoe Mall’ when it opened, because almost all the smaller stores were shoe stores.”

I have, maybe, a really dim memory of Bonanza now that Mike mentions it, but I had not thought of that before.

What I do remember well, though, is exactly the same as what commenter Joe Stein talks about. He says, “I remember the sunken garden sitting areas, lots of brown tile as well. I can’t specificaly remember the fountains though. All my childhood I was fascinated by mall fountains!”

My wonderful husband, Chris, did some trivia research for us. He writes, “And at some point in the early 1990s, Electronics Boutique moved into the mall, right? … And here’s some fun trivia: Electronics Boutique was first established in 1977 by James Kim with a single electronics-focused kiosk inside the King of Prussia Mall. … And, of course, King of Prussia is the site of the … Only in York County Gino’s Meet-Up” that was held back in March! my husband is cool. He always finds out stuff like that.

Ben Lightner says, “I remember The Orioles Store, Cinnabon, Dollar Store, Go Feet was on the corner where Marcello’s now is. Kelly’s Sports Express was actually in two different locations, once up by Hess’s then down where the Gap was. When I was in middle school, we were there every weekend. I am sure there are more I forgot.”

Scott C. adds, “Walden Books was there until not too long ago. The travel agency was called Liberty Travel and is now located along Route 30 beside Rita’s.

I remember a store called KichenWorks that sold kitchen supplies. There was also a sports store called Kelly’s Sports Express. I seem to remember there being a Bonanza Restaurant,” Scott says, which he thought was where Artesian Pools is now; and he also mentions that York County High School was in the mall in the same area.

Jamie Oberdick brought up another store that I’d forgotten at the mall. Jamie writes, “I used to work at the One Hour Moto Photo while back on break from college. Lee was the manager, the best boss I have ever had, to this day. Wonderful person. It was interesting seeing some of the photos as I was printing them. Most were mundane, but I gotta tell ya, York County….some of you are WEIRD. Yes, we got some racy ones and ones that were both racy and rather odd. I greatly enjoyed working there, overall. Fun job for a college kid.”

I’m sure fun was one word for it! I do like to talk on this blog about all the things that make York County “just plain weird,” and I think that qualifies.

Some more I’ve been able to recall: T-Shirts Plus, which would print about anything in the world on a shirt for you. My judo partner and I in high school had shirts made there for each other. And a little more recently was B. Moss, a clothing store I liked that was where the spa is now. (Next door was Friendly’s – yum.) And wasn’t there, briefly, an indoor miniature golf place where the Elicker’s Kenpo Karate studio now sits?

Another store no one mentioned, but which I loved to visit, was a hobby shop. Was it maybe “Allied Hobbies?” This was maybe in about the area where Chick Fil A’s “mall seating area” is now. It was where I bought materials for stamp collecting and where my family got all the miniatures and trains for our Christmas village that we set up around our tree each year. Can anyone confirm if I’ve got that store name right?

2 comments on “The West Manchester Mall through the years”