The Orpheum, the Coliseum, the Valencia and more: Memories from Wade Kehr

Back in August, I shared some memories of the Dallastown area by Wade Kehr.

I have since received many other Dallastown thoughts, and those will be a subject for another day. Today, though, I have some neat images and memories to share from Wade regarding downtown York.

He writes, “I found an advertising sheet put out by N. and Louis J. Appell for the ‘Orpheum’ dated Oct. 10, 1917. You might find it interesting. Also an article on ‘The Valencia,’ owned by the Tassia family. I purchased the Tassia bldg. next door from Steve and (it) is now owned by Kinsley Properties.”

The flier from the Orpheum was really neat. It’s almost like today’s Playbills, with information on the show in the center, surrounded by advertising. What was on stage?

The show of the night was “The Bird of Paradise,” described as “A love story of Hawaii.” Coming attractions included “Hello Girls” in “The Duke’s Mixture,” as well as Wm. H. Hart in “The Old Deck,” and Fritz Kreisler, “the World’s Greatest Violinist.” 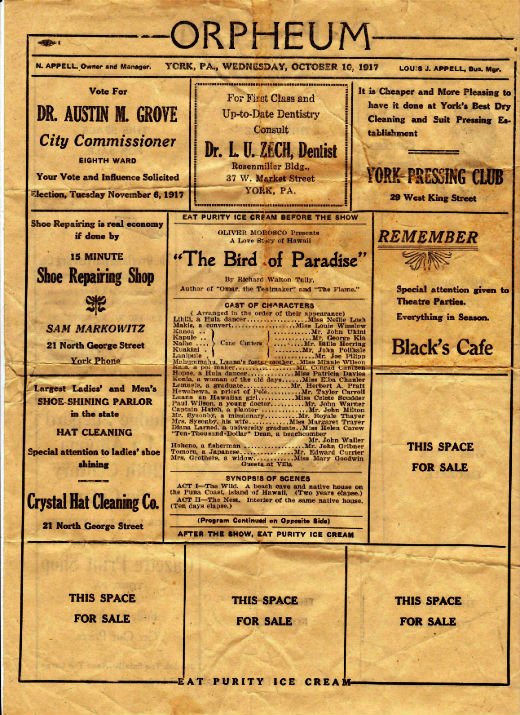 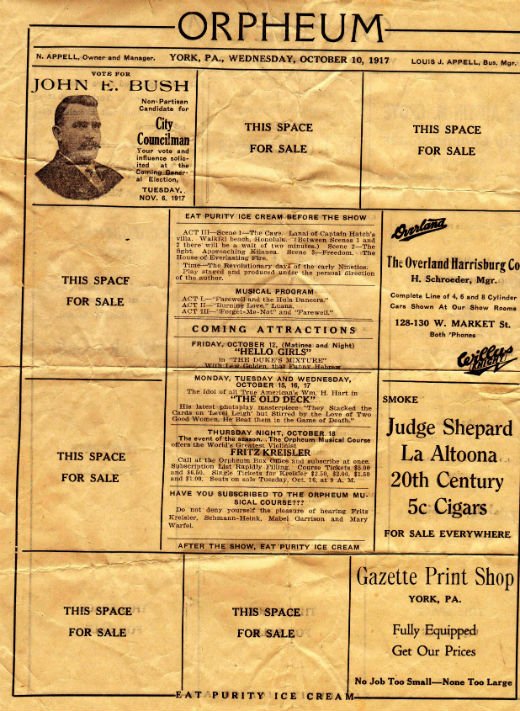 Meanwhile, here’s a look at the article from the Aug. 9, 1981 Sunday News, part of a series titled “The York That Was.” Hmm… that idea sounds familiar! 😉 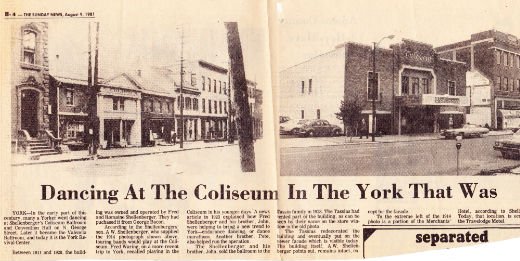 While you almost certainly will not be able to read the text, the gist is that what used to be Shellenberger’s Coliseum Ballroom and Convention Hall (seen in the photo at left) during the years of 1911 and 1928 would later become the Valencia Ballroom under the ownership of the Tassia family, who would remodel the building and add a newer facade on the otherwise intact building (seen at right.)

Perhaps most interestingly, Wade ALSO shared with me a copy of the postcard of the Valencia seen at the top of this post; you might remember that from Bob Steindl’s set of postcards shared last week. How amazing to see two copies of the same one within weeks of each other!

Thank you, Wade, for sharing, and for the copies of such neat ephemera. I am glad to get to share it!