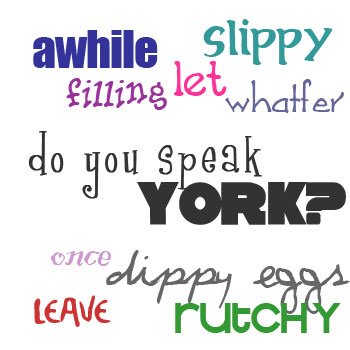 It’s time to dive again into the realm of Yorkisms, those fun Pennsylvania Dutch or Pennsylvania German sayings that, while certainly not found ONLY in York County, are prominent here.

We most recently talked about this topic last August, when I shared a list of just a few of the expressions I love most, like “dippy eggs” and “whatfer” and “once’t.”

Since that time, I’ve received more letters about your favorite “talkin’ Dutch” expressions that I wanted to share today.

Reader Bob Naylor mentioned one of my favorites, to redd or red up. Bob wrote, “Many mothers when I was growing up in York would be after their children to ‘red up’ their rooms.”

He also added, “Don’t forget ‘ain’t,’ not just as a poor contraction for “are not” but, as used in York, at least back in the day, as both an affirmation and a question, as in ‘watermelons sure are dear at the market this month, ain’t?’ And there’s another one – ‘dear’ to mean expensive.”

Ain’t used in that way was something I wrote about when I started Only in York County in 2007, and it continues to make me smile.

Bob also points out that we shouldn’t forget to mention how “muggy” the weather gets in the summer (though he adds that he’s heard some Midwesterners use this too) and, of course, our favorite meats, puddin’ and scrapple.

But my favorite Bob story is this one: “When I left York and went in the service in 1976, more than a few of my shipmates thought that I was from a foreign country and spoke with an accent. I wasn’t, of course; but I was a Yorker. And Yorkers truly speak uniquely and differently. A few years ago, at the Grand Canyon in northern Arizona, someone along a hiking trail asked where they could get some ‘wooder.’ My wife replied by asking them which part of York County the were from. The looked astonished and answered ‘Dallastown.'”

That was my favorite, because I just had the “wooder” conversation earlier this week with Dan, my fiance-from-Washington-State, who definitely does not fit in around these parts in his talkin’!

I also heard from longtime reader Roy Flinchbaugh, who helped me out with the origins of the use of “once” at the end of sentences – like “Give me that book once” or, as I often hear it pronounced, once’t (“wunst”).

Roy pointed out something I try to mention regularly, which is that Pennsylvania “Dutch” is really a German dialect. “German people I visited in Germany thought it sounded like Swabian dialect,” Roy added. He also said he has a “Pennsylvania Dutch Dictionary” published by William Penn Senior High School and Atreus Wanner Vocational School, York, and printed by The Dispatch Publishing Company in 1951. It was compiled by Dr. Edwin R. Danner of Spring Grove.

He added, “As I understand from Dutch speakers, you can test whether someone can speak Dutch by asking ‘Kaanscht du muukka funge?,’ to which they are then to reply ‘Ja, wonn sie hucke bleive, avver sie bleib net.’ (Literally ‘Can you catch flies?’ ‘Yes, if they remain sitting, but they don’t stay.’) Sadly the language is swiftly dying out.”

In past columns, we’d also talked about various radio broadcasts in Pennsylvania Dutch. Reader David Albright noted that one of the broadcasters, doing a show out of Red Lion, was his uncle, Albert Grote. David wrote, “He lived in Jefferson and was an insurance rep for Nationwide. His wife and my dad were brother and sister. I know he sang very well in both Dutch and English… We used to go up to Jefferson every other Sunday so we could visit my grandparents and also all the uncles and aunts. It was so much fun to sit and listen to him tell stories. If there was a good joke he would tell it in Dutch so us little ones could not understand it.”

We’d also heard about Al Dubs, another Pa. Dutch radio broadcaster, who also played the trumpet as well as advocating for the dialect, according to reader Dolores Harbold Senft.

Another fun letter on pronunciations came from Wayne Knaub, who said, “How many people outside York County know how to pronounce Knaub – go to Maryland and ask!” He also pointed out that Francis and Romaine, in the German tradition, are often men’s, not women’s, names.

And finally for today, which is fitting because I just ate some potato chips while writing this column, comes a quick note from Brenda Neff, who writes, “How about ‘schleck?’ My mother used to say this referring to junk food.”

That’s definitely a good one to add to the list; I’ve also heard “schlock” for the same! Thank you all for sharing these great Pennsylvania German expressions with me!

Here’s a quick poll for summer: Are they fireflies or lightning bugs?