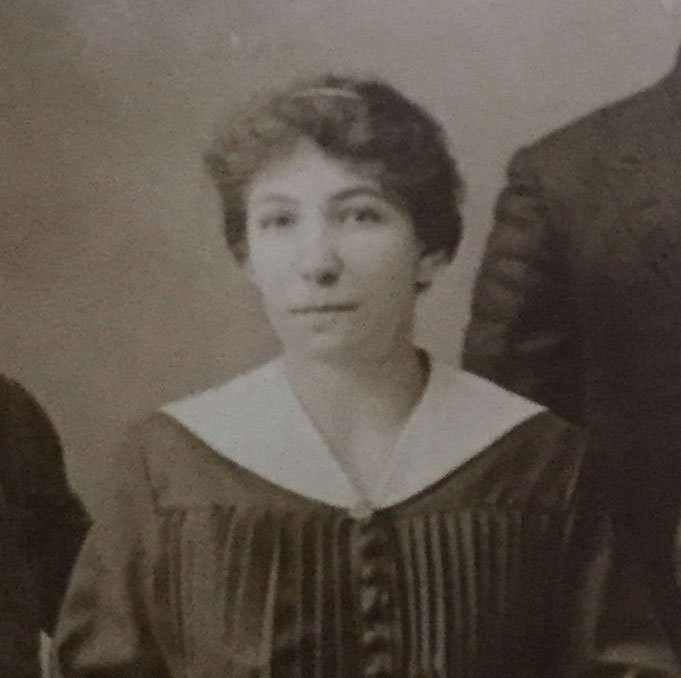 Ask Joan: The “stockings and doctors and yarn” edition

Today’s column is truly woven together from all sorts of odds and ends, mostly newer things that have come in via email over the past few weeks. I hope you’ll enjoy.

1. Remembering Felty’s and “The Stocking Lady”

First up today comes a letter from longtime commenter Joann Hano. How longtime? Well, my first record of a comment from her was in 2011 column about Franklin Discount and Robert Hall’s Men’s Clothing. I also made her old library card famous in 2013.

At any rate, I heard recently from Joann, who began, “Haven’t written to you for awhile so here’s a line going back to the late ’40s and ’50s.”

Her letter continued, “Remembering Felty’s News Stand on South George Street across from St. Mary’s Church. As kids, we would go there to buy comic books for 10 cents. Archie, Little Lulu and Donald Duck were just a few. Any kind of candy was 5 cents a bar. So many choices, if you had a quarter. That place was always busy selling cigarettes, magazines and especially the Sunday newspaper. The Feltys were friendly, and everybody loved that Mom and Pop store.”

I don’t think I had heard Felty’s mentioned before, so I am very curious to hear more about it from anyone else who remembers.

Then Joann continued with a very cool story I didn’t expect!

She wrote, “Now, few people remember just around the corner near Penn Park, at 22 W. College Ave., lived ‘The Stocking Lady.’ She was my grandmother Katie Gaubeart. During World War II, nylon was scarce because most was used for parachutes and other war needs, so nylon stocking were rare to get. Women would give anything to get their hands on a nice pair of nylons (panty hose had not been invented yet). Harry Gaubeart, her son and my dad, owned Hellam Hosiery, so she was able to set up a nice little hosiery business in her home. Day and late into night, women would ring her doorbell and come into her parlor, wanting sizes 8 1/2 to 11 nylons in colors like sepia, tan or nude. They left knowing they had nylons for dancing at the Valencia on Saturday night and for church Sunday morning.”

Joann continued, “Back then, a woman in business was a rarity. In today’s world she would have been called an real entrepreneur!”

After hearing about Katie, I touched base with Joann, because her grandmother sounded like a pretty amazing woman. I was curious if she had specific memories of her grandmother, and she was kind enough to share the following:

“We kids helped her get the boxes with nylons from the stacks in the back room. Also we were allowed to answer the door if we were there for the day.”

She also recalled another entrepreneurial venture of her grandmother’s: “Besides selling nylons she also took in lace curtains to clean. She carefully washed the curtains with homemade lye soap, then put them on large wooden stretchers with sharp tacks all around the edges to dry. The stretchers were kept in the yard. Each pair of clean lace curtains was then wrapped and ready for client pickup.”

She concluded, “We kids loved to go to Penn Park when we visited her. There were goldfish in the fountains and in the evenings bands would play music. It was such a pleasant place to be in the late ’40s and early ’50s. I also remember the majestic statues. Oh, my, I could go on.”

What’s interesting is that one of the things I’ve been meaning to mention in a column is, as it turns out, Penn Park. Jim McClure had a late June column sharing some neat facts about the park’s role in York past and present. I’m looking forward to attending Equality Fest there in a couple weeks (Aug. 4) and wanted to both call out that event and share Jim’s column; if you haven’t seen it yet, check it out at yorkblog.com/yorktownsquare. (And learn more about Equality Fest at facebook.com/equalityfestyork. I hope I’ll see you there!)

At any rate, because of that, I thought Joann’s letter was particularly well-timed, and I’d very much love to hear from anyone who remembers her grandmother!

Next up today is a letter from Jim Hitz, who began, “Always liked reading your articles and now I find myself looking for advice also. Going back 20 to 30 years I had some dental work down at a dentist on West Market Street. I think it would have been somewhere in the 300 to 600 block. I’m fairly sure his name was Dr. Doctor. Shortly after, he had a stroke and was unable to return to the profession and I was also unable to acquire my records, so I can’t verify the name or address.”

So, Jim asks, “Just wondering if anyone remembers him and if I am correct with the name?”

Well, in the kind of random thing that only happens to me, I saw Jim’s note and thought, “Wait, I think I remember something like that from an article I wrote in, like, 2002, about Guy Creep.”

Imagine what kinds of good things I could do in the world if the storage space in my mind wasn’t taken up with the names of hundreds of people I’ve interviewed, huh?

Well, of course I was then able to turn up a copy of the article, because of remembering Mr. Creep’s name. He was a noted funeral director in York for many years, and when he passed away in November 2002, I interviewed his grandson, Brian Creep. Brian Creep talked about his grandfather’s work as an undertaker and his many other noteworthy achievements – as well as the sense of humor that served him well, as someone with something of a rough surname for a mortician.

To wit, my story notes: “He even appeared in Ripley’s Believe it or Not, along with some other strangely named York residents. ‘Me, a dentist named Payne and a lawyer named Crook,’ Guy Creep said in 1995, while being interviewed about his status as the former North York High School’s oldest surviving graduate.”

That was the line I was trying to recall when I read Jim’s letter. (I actually thought “a doctor named doctor” was on that list, so I guess that’s one strike against my memory bank.) It also turns out that the connection made by Guy Creep would have been quite a bit earlier; when Mr. Creep passed away, he was 100 years old, and his funeral home was in business for about 35 years from the late 1930s until at least the mid-1960s.

That said, despite not having a direct reference to Jim’s “Dr. Doctor” dentist, I thought it would be fun to bring up Mr. Creep’s reference as well, so that we might talk about Payne the dentist and Crook the lawyer in addition to any other relevant York practitioners. Please share any you have, especially if you can actually confirm Jim’s question, since that’s what got this all started!

Finally for today, I have a request from Elaine Agee, who writes, “Do you have any memories of a yarn shop on Belmont Street in York? I work with Rita Mae Yarns located on Eastern Boulevard; many of the customers that come in mention that shop. We would like to know the name and be able to share the memories with our customers.”

I took a look at Rita Mae Yarns’ website and found that it was started by a woman named Cortni Robinson, whose great-grandmother was Rita Mae Clasen, who passed away in 2014. “My grandma Rita was a great part of my life and was an amazing fiber artist. She inspired me to learn more about the needle arts and ever since that time, I have fallen in love with the craft. I named my business after her to honor her memory and remember she stemmed my love for the fiber arts,” the website states.

(I’d also be remiss if I didn’t mention two of my other favorite yarn-related businesses in York: Beth Lutz‘s The Alpaca Yarn Company, which has fiber for sale at stores and farms across the country, and Joan Carpenter‘s Ewe and Me Yarn Shop, open to the public on North Beaver Street. I know both of those awesome women through the York County 4-H Alpaca Club, in which our family participated for years, and they do some cool stuff with fiber!)

My hope is that someone will have an idea about the Belmont Street shop; I’ve not heard of this previously and wasn’t able to dig anything up in various archives, so more information would be welcomed!

2 comments on “Ask Joan: The “stockings and doctors and yarn” edition”