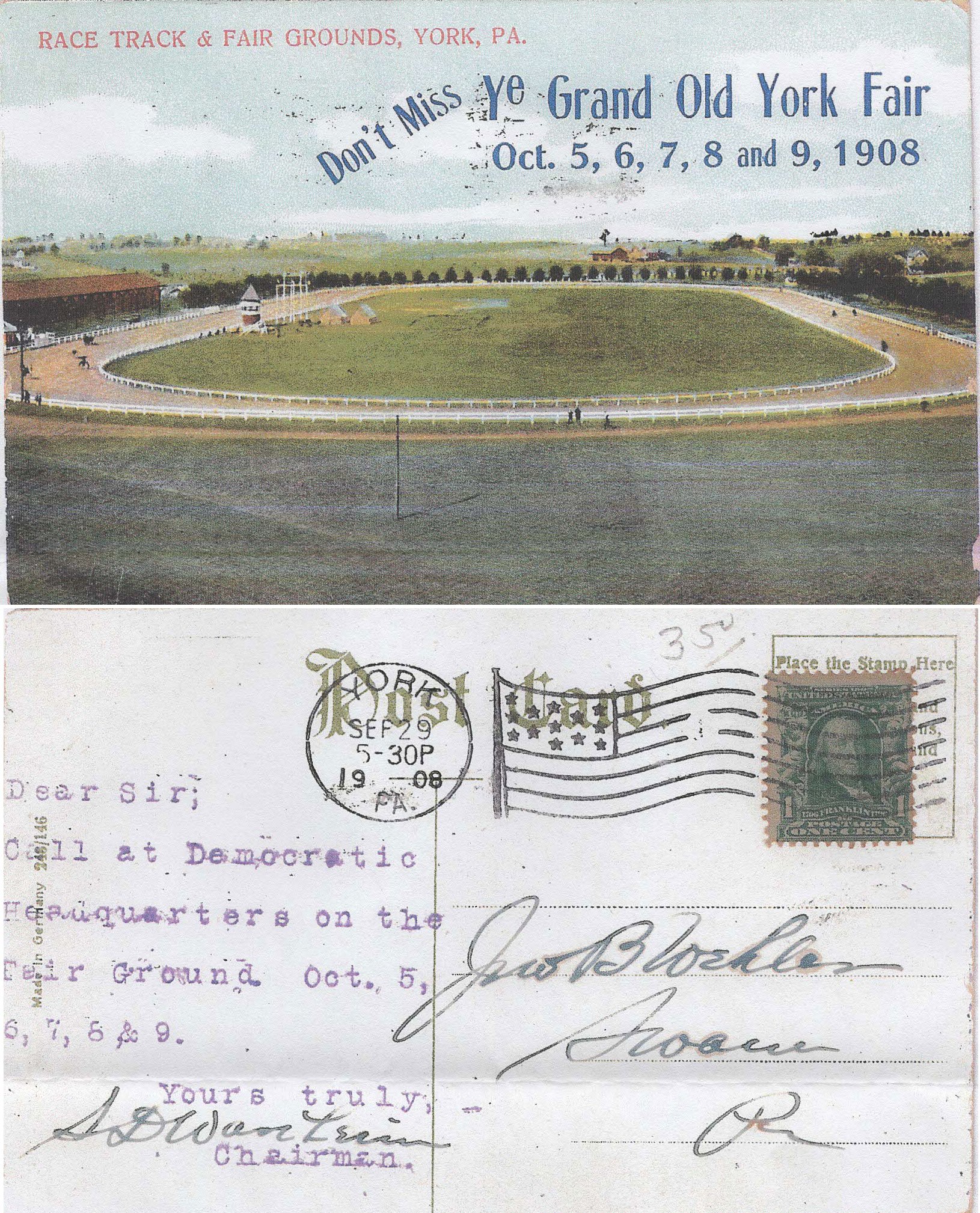 Cindy Roach of Washington Township shared the front and back images of a 1908 York Fair (or Ye Grand Old York Fair, as it was called at the time) postcard from her extensive postcard collection. The Fair was held in October during the early part of the 20th century.
Posted by Joan ConcilioNovember 6, 2019November 6, 2019 Local memories, Spring GroveNo Comments

Help from friends in referency places

Toward the middle or end of September, you might recall that I shared a couple of York Fair postcards from reader Cindy Roach of Washington Township. One, sent in 1908, was a mass-mailed call for registered York County Democrats to call at party headquarters during the Fair.

I was proud to have figured out some information about the person who signed the card – Spencer Doyle Wareheim, a Glen Rock native who practiced law and served as York County’s Democratic party chairman in the early 1900s. (If you missed the details about Mr. Wareheim, you can search for his name at yorkblog.com/onlyyork to read more.)

I was at a loss, though, on the addressee of Cindy’s card. Even ephemera blogger Chris Otto of Papergreat couldn’t help; the two of us often serve as “handwriting translators” for each other, but we just had nothing.

And that’s where one of my many “friends in referency places” came in. I have been fortunate enough, over the 12 years I’ve been writing about York’s past and peculiarities, to have a number of interested and well-informed readers who have gone above and beyond to find out things about various columns and questions. The late Jo Ott was one of the first, routinely combing local historical societies and her own files for things for me and also serving as my intrepid photographer, often venturing to tucked-away corners of the county to send me photos of what a place might look like at present. More recently, reader and friend Audrey Lerew has regularly performed hours of research on my behalf – in addition to sharing her own memories and those of her sister Charlotte Halpin – for which I am immensely grateful.

This mystery was solved by another amazing resource – Jonathan R. Stayer, Supervisor of Reference Services for the Pennsylvania State Archives in Harrisburg.

Less than a week after seeing my column showcasing Cindy’s postcard – and seeing it in print, where the size and sharpness might make it harder than if he had seen it online – Jonathan emailed to say, “I have been able to determine to whom the 1908 York Fair postcard was addressed, which you mentioned in your York Sunday News column… It was addressed to John B. Wehler of Swam, Pa.”

Jonathan was able to arrive at this from the following:

First, he said, “The first name on the card is ‘Jno,’ a common abbreviation for ‘John.'” (While that was almost certainly elementary to Jonathan, it was definitely not to me, but I then had fun looking up abbreviations for names for quite some time.)

He then was able to work out John B. Wehler as the full name, which I had gotten close to (spotting “Wehler” but thinking the B went with the first name) but not quite zeroed in on.

Jonathan noted that the 1900 Census shows John and Delia living in Paradise Township, York County, and provided a Census record of the same.

Then, he noted, “According to the Gazetteer of York and Adams Counties, PA (Special Publication #63 of the South Central Pennsylvania Genealogical Society), page 71, ‘Swam’ was the post office name of ‘Baughmansville’ in Paradise Township from 1892 to 1915. The 1876 atlas of York County shows Baughmansville as the area around the intersection of the East Berlin Road (Route 234) and Admire Road. I counted at least three residences south of Baughmansville identified as ‘J. Wehler’ or ‘Jno. Wehler.’ Since John B. Wehler was born in 1841, he would have been old enough to have his home depicted on the 1876 atlas.”

Jonathan even found an image of that map online so I could see where he meant!

He concluded, “Most likely, S.D. Wareheim was sending cards to Democrats in York County, so the addressee would have had to be a resident of the county. Therefore, the Swam address makes sense. All of these facts considered together verify that the addressee of the card was John B. Wehler of Swam/Baughmansville, Paradise Township, York County.”

I was amazed – and happy to tell Jonathan so. He noted about his handwriting skill, “After working with handwritten documents in the English language from the 17th century to the present for over 40 years, I am able to read most things (Thaddeus Stevens’ handwriting is the worst!)”

As I said, I was amazed – and very happy to be able to figure this out. What I’m most interested in as a follow-up is whether there’s any documentation that the “Swam” name for the post office was an Anglicized version of the “Schwamm” of Holtzschwamm. (Holtzschwamm, by the way, translating to something like “woody swamp,” and thus “Swam” basically being a mailing address for “swamp…”)

So that’s my own research project for another day. I am hoping within the next month to get up to the Archives to meet Jonathan, and maybe he will be able to show me how to go about tracking something like that down!