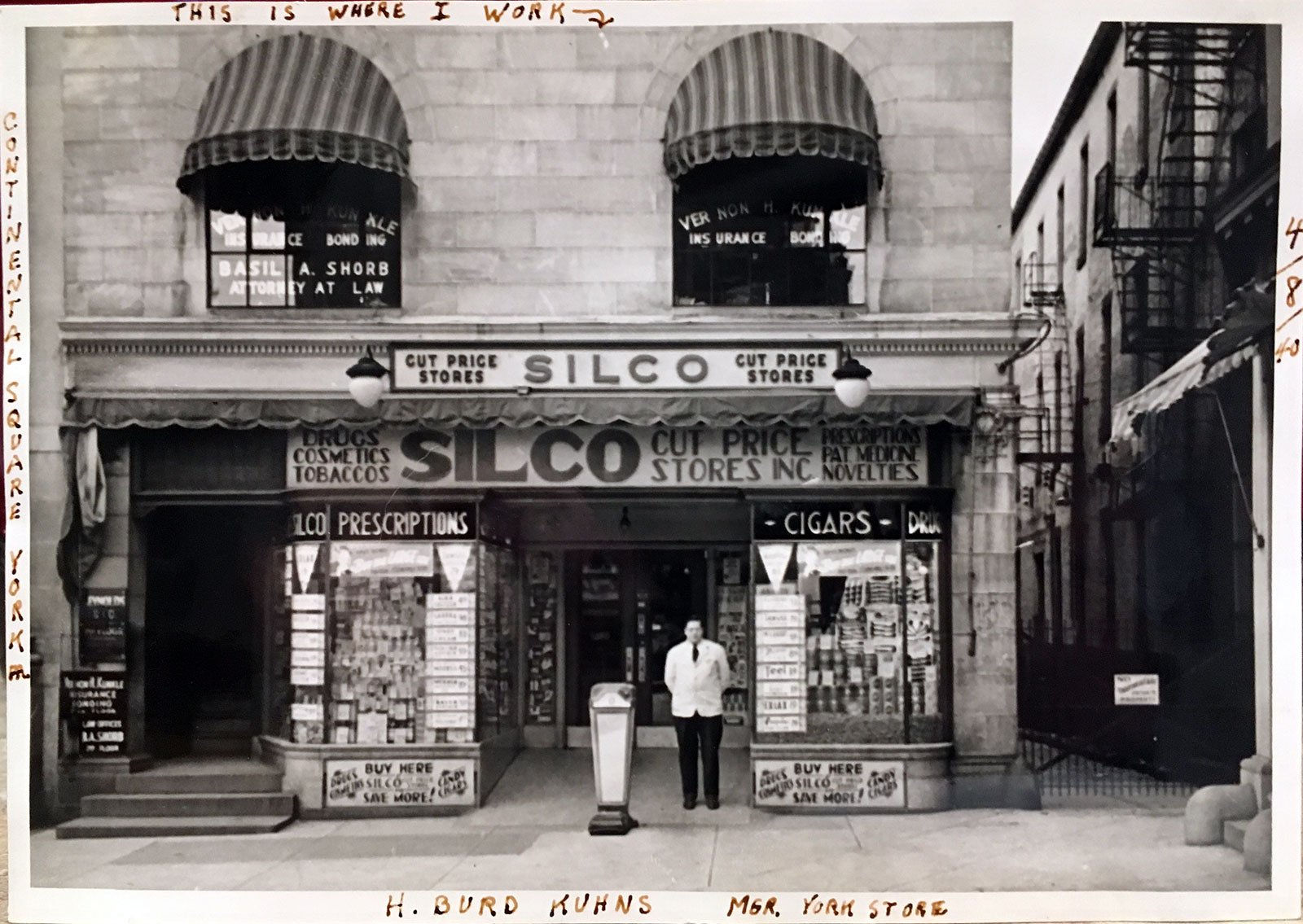 As I continue to work my way diligently through my letters pile, I have quite the variety of things to share today – including some nice photos from one reader who has been patiently waiting for me to mail them back since June 2017. My deepest apologies, reader Carole. I hope my public admission of my failings in the area of mail will help show my sincere desire to do better!

1. Memories of Silco and more

The aforementioned languishing photos – and a nice note of memories – came to me from Carole Kuhns Bradfield. Carole wrote, “I grew up on the first block of South Queen Street so the downtown area is very familiar to me and I love remembering times past. I would like to add some items for your information.”

She began with something I was not familiar with: Silco Cut Price Stores Inc. “I don’t remember seeing any articles about this store,” Carole wrote, and she is correct – I had never heard of it!

She continued, “My dad came to York in the late ’30s to be pharmacist/manager for the store in the northeast quadrant of Continental Square. It was the Cassatt Building at that time. It later became Murphy’s annex and then an extension of the First National Bank.”

“Silco had two other locations in York,” Carole wrote, “145 W. Market St., between Wagner’s Stationary Store and Julius Music House, and the northwest corner of South George and West King streets. The South George Street location was the last to close, probably in the ’60s, but I’m not sure about that. They also had a store in Columbia that was open into the ’70s. They had many stores in seven states. My thoughts: ‘Ahead of their time – forerunner of today’s discount stores.'”

Next, Carole said she wanted to share more things she remembered in the downtown area. “Second block of East Market Street – east of the York Water Company building – Daniel’s ladies apparel; Chauncey’s News Stand (and soda fountain); Mary Rutter’s Corset Shop; and Liggitt’s Linen and Gift Shop, which was on the southwest corner of East Market and South Queen streets (the Bacon apartment building). There was a cafeteria across the street from the York Water Company but I can’t remember its name.”

Carole, thank you so much for adding not just Silco but some other businesses I know we had not yet mentioned, like Chauncey’s and Liggitt’s!

Last summer, I shared a question from a reader named Craig and some follow-up mail, all centered around the name of a former downtown furniture store.

Because we had some trouble identifying the specific location Craig was remembering, readers had suggested two possibilities: First, Leinhardt Brothers, near the Vigilant Fire Company on West Market Street; and Shive’s, in at 149-155 W. Market St.

A letter I received from reader Jo Alwine was among those who wrote to tell me that Shive’s was a possibility; she said, “He may be thinking of Shive’s Furniture Store (in my neighborhood at the time), which was in the block between Newberry and Penn streets, on the north side, walking west. My husband and I bought all our furniture there when we got married in 1965… Just a thought!”

Jo, thank you so much for sharing that – I do think Shive’s is a good possibility for the store Craig was trying to place!

When I wrote about that cookbook, there was one recipe I didn’t fully copy for something I’d never heard of, listed in the book at Apeas Cake.

The cookbook says, “Also called Epee Kuche. The name is often confused with A.P.’s Cookies. However, this is the breakfast cake of Berks County, where it is as popular as Shoo-Fly Pie, and that is very popular! Most cooks bake from four to seven at a time, sizes ranging from five to nine inches in diameter and as high as four inches.”

I was curious to learn more about this cake, and once that column ran, I heard from Kathleen Nickel, who said, “I am Mary Jo Kraft’s sister, and the A.P. cake recipe we have, did in fact come from Berks County. We always served it as a coffee cake and the older the cake gets the better it tastes. We were always told the A.P. = Aunt Pat or “A pie” cake; I don’t know who Aunt Pat was or when she lived.”

Kathleen concluded, “Mary Jo is the best cook and has this recipe that has been handed down in the family for several generations.”

While I didn’t copy that recipe specifically, I did hear from another reader, Melanie Stover, who had to share with me a 100-year-old apie cake recipe from Pottstown. Melanie said, “This recipe was given to me many years ago by my great-aunt T. Elizabeth Holden of Pottstown.”

Combine those three ingredients and beat vigorously until foamy.

Mix all ingredients. Batter will be thick. Form four cakes; should flatten slightly so they bake evenly.

“This cake is nothing like shoo-fly pie, but is very good dunked in coffee,” Melanie said. “I make these cakes for breakfast.”

I’m excited to try to find time – when not digging through my mail! – to make myself an apie cake!