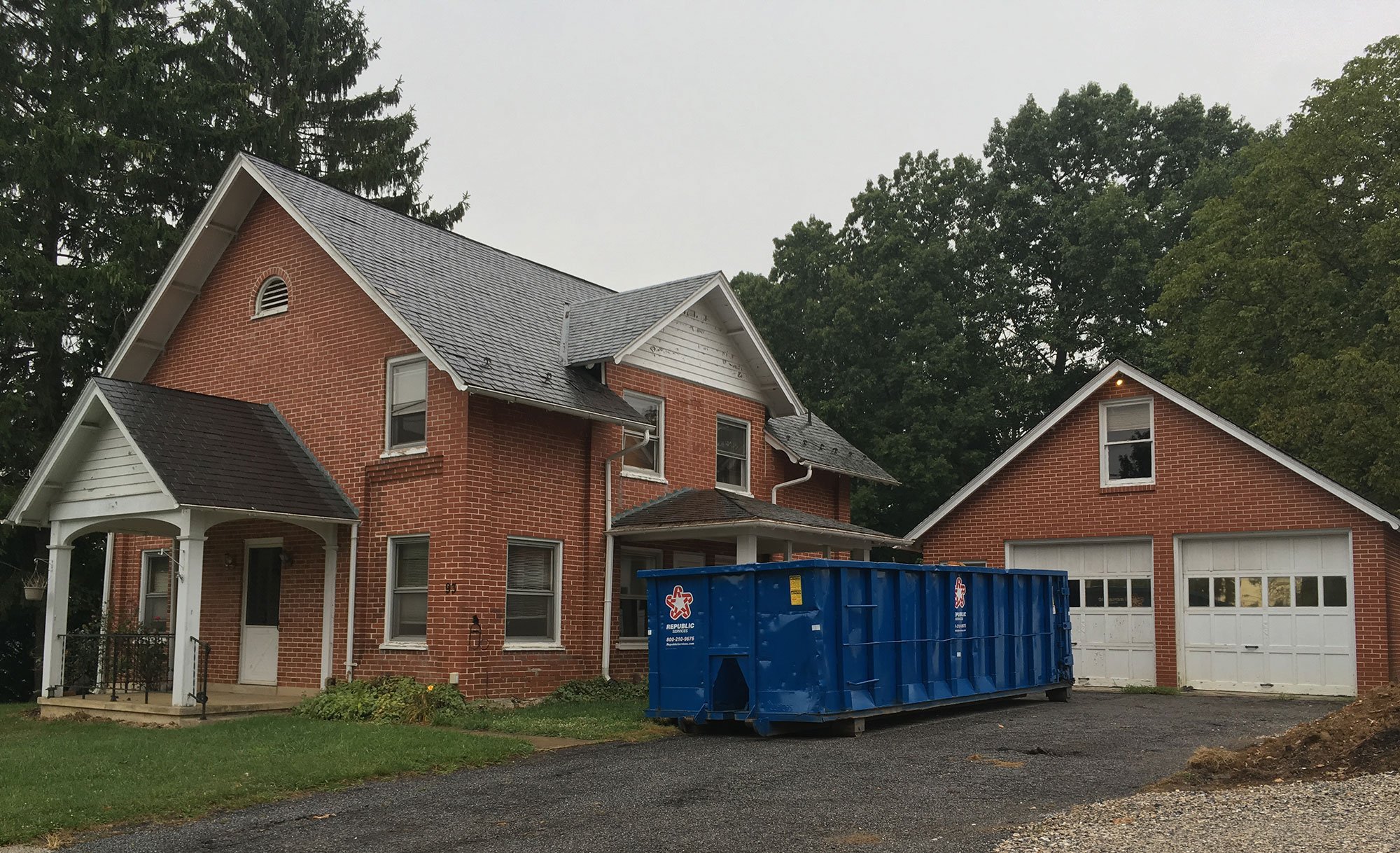 One woman who was at the recent York County PA Association of School Retirees meeting asked, after hearing about preservation efforts for some one-room schools, about whether there was any information about this building. Most recently a home, it sits on the edge of the Apple Hill campus at Grantley Road and Monument Road in Spring Garden Township, with an address of 93 Monument Road. She believed the building, which records show was constructed in 1900, used to be a one-room or few-room school (though it's been added on to since then) and wanted to know its name and any memories. It's set for demolition as part of the construction at Apple Hill - hence the Dumpster - so it's an opportune time to try to capture this info before the building is gone.
Posted by Joan ConcilioAugust 15, 2019August 15, 2019 Joan's randomness, Local memories, Only in York County3 Comments

Earlier this week, I had the honor to speak to the York County PA Association of School Retirees about some of the best parts of York County’s educational history – one-room schoolhouses!

The group includes retired teachers and also custodians, maintenance workers, secretaries, cafeteria workers, aides and administrators. In addition to getting together several times a year, traveling together and participating in a number of fun activities, the group has a number of service projects in the community.

One of the coolest, which I got to hear about at the recent meeting, is that they award scholarships each May to local high school students headed to college to major in education. The group held a basket auction at this month’s meeting to help raise funds for that effort, but further donations are always welcomed. Checks can be made payable to YCPASR Scholarship and mailed to Joel Reidel, Treasurer, 2170 Cobblestone Lane, York, PA 17408.

I’m deeply thankful to Sue Ayres, the program chair for the group, for inviting me to speak. Sue attended the YDR’s History Storytellers night last November at the Belmont Theatre, where I talked about a couple of photos of life in York that have a lot of special meaning to me. One of those was a one-room school class picture, and that’s how Sue and I began talking and how I came to learn more about the retirees’ group.

It was great to speak to the YCPASR group. I put them to work, too – asking them to come up with ideas for education-related things we should try to capture memories of in this column. They came up with dozens of suggestions, enough to keep me busy for years.

Just a few of their ideas:

What is especially neat about the last item is that, without talking about it at all, fellow history writer Stephen Smith, author of the YorksPast blog, talked about a field trip taken by one-room school students in a post this week, noting that sudents at Rearich’s School near Spring Grove took a field trip to Washington, D.C., in 1951!

I’d be very interested to hear your memories of those topics. As I said, I received lots of ideas, and I’ll be sharing more in the future. But it’s a great place to start. I also received some specific questions and memories at the event that I’ll work my way through, including the question you see with the photo accompanying today’s column.

To conclude, I want to tell a couple short, great “Only in York County” stories.

Remember when I went on a cruise through the Panama Canal and met Paul and Barbara Irwin, a couple from York County? One of the first people I saw upon walking into the YCPASR meeting was Barbara, who worked in the office in West York schools for many years. I thought that was pretty unbelievable…

… until I (I thought jokingly) asked if anyone in the audience had taught or worked with me during my years in the York County school system, and up stood Sheryl Smith, my 10th-grade geometry teacher and Quiz Bowl coach. (Knowing I was coming to speak, she brought me copies of photos and a newspaper clipping from our Quiz Bowl team’s efforts at a state title!) And I thought that was likely the most amazing thing that would happen all day, until…

… I started telling a story during my talk about Judye Garrett, whose collage painting of Garfield School and the surrounding neighborhood was such a big hit when it was published that I’ve been sending readers interested in getting a copy of the painting her way off and on for months.

Just a few days earlier, I’d had a note from Judye, telling me that she met with one of those readers, Helen (Zahn) Loucks, at Helen’s home, in order to drop off two copies of the painting.

I told this story at the meeting in order to illustrate how cool it was to have memories connect these two people, who were part of the Garfield School community at different times. When Judye let me know about the meeting, she said, “We had a wonderful visit! It was so special for me, as we talked and talked about the old neighborhood!”

Well, this might not come as a surprise, but when I opened up for comments just after telling the story, a lovely woman stood up and said, “That was me. I was the person Judye delivered the paintings to this week.”

Here, it was Helen. I could not believe it. I wanted to catch up with her after the meeting but had to run out, but I was truly hoping to give her a hug and thank her for providing an “Only in York County” story that will be almost impossible to top. Helen, if you’re reading this – that was a wonderful experience. Thank you so much for letting me know, and for letting me share your story both with readers here and with the retirees group. It is greatly appreciated!