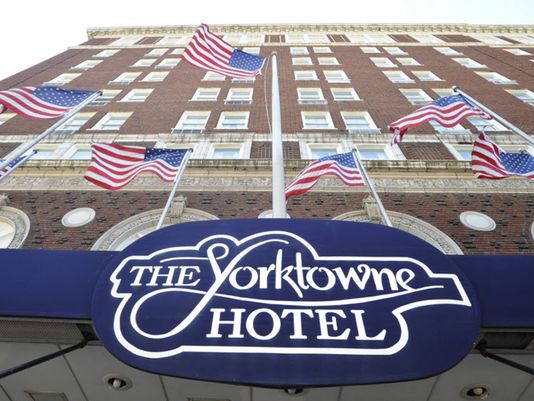 Over the summer, I had a great letter from reader Robert W. Goldsmith, who said he wrote because he was feeling nostalgic about York. He shared a great collection of memories, and even went so far as to boldface all of the names of the businesses he talked about for ease of reading (which was greatly appreciated!)

Robert wrote, “I now live in Las Vegas, NV (a great place to live, by the way). My family moved to York when I was five; my father worked for Borg-Warner and got transferred to York when BW bought the York Corporation. Initially they rented a house from a Mr. Kaltreider, a local home builder at the time. They then purchased a new home from Irwin Epstein of Epstein & Sons in Randolph Park.”

He continued, “The house was actually across the street from the Epsteins. I attended Violet Hill Elementary School through the fourth grade (which was as high as the school went). Years later, when I was in my first year of law school, my fourth-grade teacher, Mrs. Pottorf, ran across the sales floor of Mid-Hill Supply on South Queen Street, calling my name. I was amazed that she recognized me after 12 years, but she told me that my class was her favorite class in all her years of teaching and she had kept track of everyone.”

“My family moved to Michigan after the fourth grade, but back to York in time for me to start the eighth grade at what was then York Suburban Junior High School. I graduated from York Suburban High School in 1970. I attended college at the University of Pennsylvania in Philadelphia. (That’s not a York, PA, business so doesn’t get the honor of being boldfaced.)” (Note from Joan: Fair enough!)

Robert went on, “Oddly enough, one of my classmates at Penn, Lynne Leopold Sharpe, ended up being on the York Suburban School Board. She grew up in New Jersey and we were both members of the college band. I doubt she had ever even heard of York until she met me.”

He added, “I worked as a teller at the York Bank & Trust Company (800 E. Market St.) during my college summers. That was so much fun I can’t believe I got paid. As part of my duties I handled all of the city’s parking meter money. (You’d be amazed at what people were able to stuff into those parking meters in lieu of real coins.) ATMs were just being introduced during my last summer there. If you can believe it, they were on the honor system; you could withdraw up to $100 in $25 packets. Account holders who abused the honor had their ATM cards canceled.”

“My first memory of a business in York was York Lincoln-Mercury at the corner (I think) of Haines Road and East Market Street. I was there with my mother while she had the car serviced. I somehow decided to tell this older gentlemen (also having his car serviced) that my parents were looking for a house because the first one they rented had a dry well. He turned out to be Mr. Kaltreider and he told my mother he had a brand new house in The Hill we could move into immediately. I still remember seeing the brand new 1958 Edsel displayed on their corner platform.”

Robert continued, “When we first moved to York, we stayed at the Hotel Yorktowne until our furniture arrived.  It was from the Hotel Yorktowne that we found Mr. Stabley, the barber, around the corner on King Street. He cut my hair until I went away to college. But speaking of York, Mr. Stabley was an old-time Yorker and had wonderful stories. Being a history buff, I loved hearing them. He was at the opening of the Hotel Yorktowne in 1925 during the days of Prohibition. He said he heard one of the city fathers at the time say ‘There will never be drinking at the Yorktowne.’ We used to eat at the Wedgewood Room at the Yorktowne. Mr. Epstein, our neighbor, used to eat breakfast every morning at the Yorktowne coffee shop as his office was right across the street (Duke Street, I think). Mr. Stabley used to purchase his lunch every day at the Central Market.”

Regarding shopping, Robert noted, “I loved the York County Shopping Center on East Market Street, especially Sears, Roebuck & Co. I always had to have a hot dog from the grill at the front door. Those were the days when Sears sold everything, all of it under their own brand names. I even worked at Sears in the hardware and automotive departments summers during high school. During one summer, I met a customer named Mr. Guyer who had just moved to York to start his first job after college as a gym teacher at York Suburban; he later was my Drivers’ Ed teacher. (Sad what’s happened to Sears.) Mr. Guyer, I believe, retired from York Suburban within the past few years.” (Note from Joan: I have, in fact, written whole columns praising the Sears roller-grill hot dogs, so this was a treat for me to read!)

Robert went on, “We also shopped at Feller’s (directly across from Sears). Feller’s had a large stairway in the middle of the main floor that went down to the Men’s Department. For some reason, I still remember the aroma of the carpet on those stairs. It was actually a somewhat pleasant aroma. I purchased the suit I wore to my sister’s wedding there in 1974. I still cringe when I look at the pictures. There was some sort of girls’ dress store around the corner from Feller’s, but I don’t remember the name… (the Deb Shop perhaps).”

“There was a small Italian restaurant behind the Food Fair at the opposite end from Sears. We used to eat there regularly, but I don’t remember the name. The owner wanted to open San Carlo’s on Whiteford Road, but I believe he ran out of funds and someone else ended up owning it.”

Robert continued, “Main shopping was still downtown when I was little. My mother would park at the Yorktowne because they had valet parking and the merchants all validated. Parallel parking was not her strong suit so if the Yorktowne garage was full, we went home. All our family’s shoes came from Newswangers on the square. Most department store shopping was at Bear’s, which seemed slightly better than The Bon-Ton. I was told that when the downtown Bon-Ton first opened, people came from miles around to see an escalator (first one in York).”

He went on, “I liked the cafeteria at Bear’s, but the hours were kind of quirky. Bear’s still had human elevator operators when I was little. For finer dresses, my mother would shop at Dudley’s or Alice Hoffer’s on East Market Street. I don’t know whether this is true or not, but I read somewhere that it was the York Bon-Ton that inspired Fibber McGee and Molly to use the name for the department store in their famous radio program. (You can hear the programs on SiriusXM.)”

“We did not shop that much at Wiest’s, but I did know the famous Frieda in the boys’ department. Every Halloween, all of the store front windows on Market Street were painted in Halloween scenes by local high school students… Friday was market day in our house and, as soon as my father got home from work, we gathered up the giant market basket and headed for the New Eastern Market, which opened at 3 p.m. There you could get warm Utz potato chips and my favorite, Grove’s cakes. Knaub’s also made cakes, but the consensus in my family was that Grove’s were better. I remember I went to a party once in high school and when I got home my mother asked me how it was. I told her they had Knaub’s cakes. She answered, ‘You needn’t say more.'”

He added, “One of the stands at the market sold, among other things, freshly ground horseradish made at a grinding machine run by the mother of the man who ran the stand. One Friday, she wasn’t there. My mother asked the son where his mother was. Without stopping what he was doing, he looked up briefly and said ‘Died’ and went right back to work.”

“In junior high, I regularly met my friends for bowling at the Suburban Bowlerama. After that, we went to Carlo’s next door for steak sandwiches or pizza.”

His memories finished, “As for schools, York Suburban was great. My sister was in the seventh grade in that building when it first opened as York Suburban Junior-Senior High School. I can’t believe how the Suburban school population has decreased. My graduating class has 369 student. Now the number doesn’t even hit 200. The Suburban band was often introduced at football games as the ‘201 Knights of York Suburban.’ I doubt they could muster up that many musicians today. Our biggest high school rival was West York. We hated them and went crazy celebrating when we beat them in football. I have no idea why we hated West York, but we weren’t alone. Not long ago I was on a cruise and from something he said, I thought the cruise director might be from York. Turns out I was right. He went to another high school in the league. He said they hated West York too, but he didn’t know why either. Gave use both a big laugh.”

I very much enjoyed your walk down Memory Lane and I am sure those reading today will too. I also hope to hear from those who remember some of the places Robert mentioned; if you do, please write and share your own recollections!