Reader Larry Hauer received this old screwdriver from his father, who received it from a neighbor. It advertises Riney & Striney, a dealer of the Indian brand of motorcycles. Larry would like to know more about Riney & Striney.
Posted by Joan ConcilioDecember 17, 2018December 23, 2018 Ask Joan, Local memories, Northern/West Shore2 Comments

Reader Larry Hauer wrote to me recently to share some photos of an old screwdriver passed down to him by his father. Larry wrote, “When I was young we lived out on Druck Valley Road. There was an older couple who lived next door – Vertie and Albert Shermeyer. Albert had an Indian motorcycle. I’m thinking it was probably built during the early ’40s. Albert passed away in 1971 and when Vertie was clearing out the garage she invited my dad to go through and take whatever he wanted. I have no idea if dad took anything besides the screwdriver, but it is the one thing that found its way to me.”

His question: “Looks like there was an Indian motorcycle dealer named Riney & Striney at 203-205 Park Place in York. I’m wondering if anyone remembers the place and if there are any stories to go with it.” 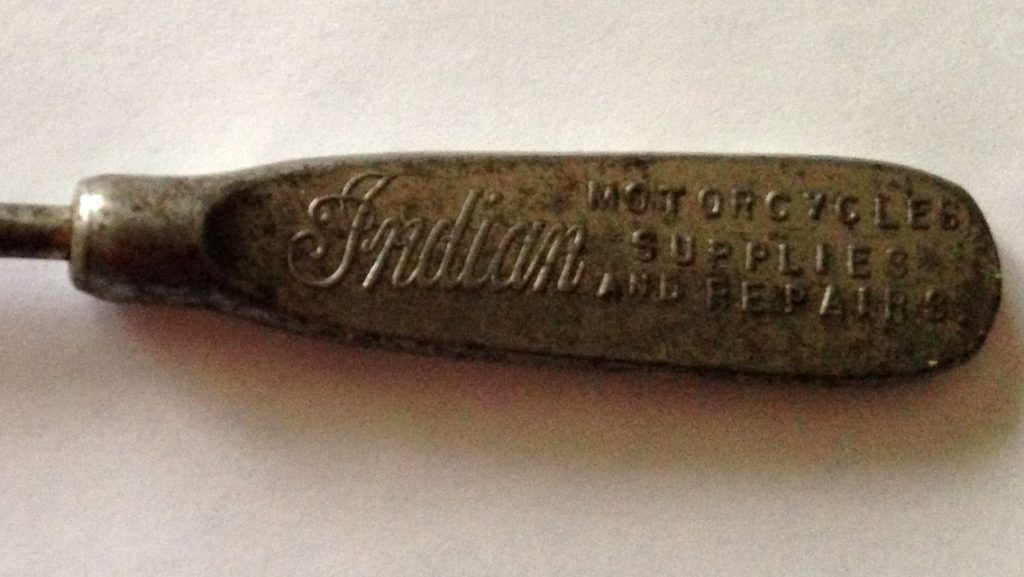 Larry said, “I never had a connection with the Indian brand, but worked at the Harley-Davidson factory for over 36 years.” He said Dec. 10, 1973, was his first day at Harley, and concluded, “I will be very interested in what you and all of York knows about Riney & Striney!”

2. Following up on cider plant

A few weeks ago, I asked about a former apple processing plant near Dillsburg for one of my longtime friends, Tracey Stoppard. Well, within a few hours of that column appearing in print, people were calling Tracey’s parents to talk about it, and she quickly got her answer!

But, for those of you who don’t live at the Stoppards’ house, I wanted to be sure I shared what information I received. The building on Old York Road, near Old Orchard Road in Carroll Township, was Lerew’s Orchard, as I heard from Rob Fogle, Mike Dennis and a reader named Marcus. Fruit farming on that land went back for several generations, wrote reader Jill Speck (now of Wellington, Fla., but formerly of Dillsburg).

Mackenzie Mills wrote to me on behalf of her father, Theron Mills, who wrote, “I remember it as Lerew’s Farm Market. It originally started across the road where there was a barn they sold apples from. Sometime in the ’70s they built a larger facility. It had a big apple press. I remember my dad taking me there to see them press apples into cider. I even remember going there for something to do on one of my birthdays with my dad, Allen Ruth (who happens to be Tracey Stoppard’s cousin), and a few other friends.” (OK, Joan’s side note: How “Only in York County” is that?)

Theron continued, “In the fall, my father used to buy three crates of apples; Red and Yellow Delicious apples and Stayman apples. We would enclose the crates in a big plastic garbage bag and place them in our well pit to keep over winter. Throughout the winter we would get apples out to eat and for Mom to bake. I don’t think they were operating in that building for more than six or seven years and I’m not sure why they closed up. Do you know of anyone who would remember the roadside stand that was just south of Lerew’s Farm Market? I believe it was known as Storybook Orchard.”

I’d love to find out more about Storybook for Theron, so if you recall that, please do let me know.

And finally, I received a great letter from Darlene Lerew Dwyer, who wrote about Lerew’s Farm Market, “The land was originally owned by my great-grandfather, William Lerew, then my grandfather, Frank Lerew. In the early 1950s my father, Lloyd M., bought the property and with my mother, Kathryn Karns Lerew, ran a small retail ‘store’ (it was actually a ground cellar) selling home-grown fruit that was grown on the approximately 100 acres.”

She continued, “In the early 1970s the business was incorporated and the building in the picture was built. There was a farm market with a bakery (some may remember the smell and taste of the cider donuts made on the premises), a room with rack and cloth cider press that you could watch from a window, and a fruit packing plant. Additional orchards were planted and a wholesale business was also started.” (Note from Joan: You can see that picture, which ran with the earlier column, at yorkblog.com/onlyyork/ask-joan-apples.)

Darlene continued, “In the mid- to late ’70s, the cider business began to grow and we supplied most of the grocery stores in the area with fresh apple cider and made cider that was transported in large tanker trucks to other juice bottling plants; in fact, we were one of the first producers of juice for the Apple and Eve brand of juice. We also were one of the first to be placed in shelf-stable ‘brick packs,’ which we now know as juice boxes!”

And, she concluded, “By the time your reader visited, the retail market had already closed and the equipment was very modern so what she remembers about it being a processing plant is correct. What happened to the business? Well, as anyone who has run their own business knows, it is a 24/7 job and it doesn’t leave much time for family. It was decided to sell the business in 1989.”

3. A holiday request from Joan

I’ve been writing the “Only in York County” blog and the Ask Joan column for more than a decade now, and there are many readers and commenters who I feel like I’ve gotten to know well over that time. Those of you who have been reading for some time may recognize some “regular names,” too.

Today, I’d like to ask a favor. Longtime reader and commenter John Loeper is in a nursing and rehabilitation facility in Harrisburg following a stroke in July of this year, and reader Ted Schaefer has been working with John’s wife, Barbara, to keep people updated. John has a rough road still ahead, and Ted has organized a Christmas card shower for him.

I know it’s short notice – but even if it arrives late, would you consider sending John a card and thanking him for sharing his York County memories? I am certain he’d love to receive them. They can be mailed to:

It would mean a lot to me to know that our reader community is willing to send John a York County smile!