Many, many York County restaurant memories in honor of Pi Day

Today, I want to round up a BUNCH of memories of restaurants of the past. Yum! Settle in and… dig in!

This advertisement from former York restaurant Avalong Farms was from a 1971 edition of “This Month” magazine and was submitted by Regina (Tufarolo) Altland. 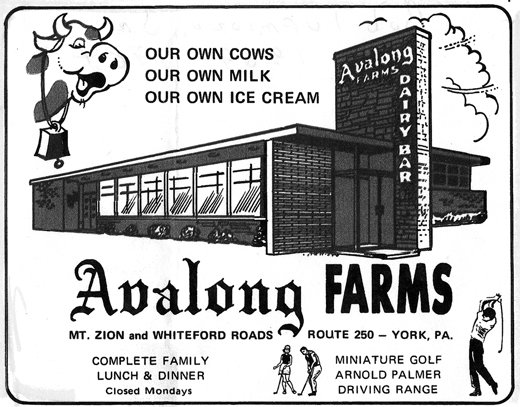 Karen J. Long noted that the fire at the restaurant did not contribute to its passing. She says, “The fire occurred in the late ’70s. The restaurant went through changes involving family ownership in the mid ’80s, with some family members leaving the organization… Avalong’s was named after Alva Long, the L was dropped from his name.”

This is one I had a question about from a reader. Lee Shry writes, “Trying to find where Dottie’s Diner was. I think there was a race car with that name on it.”

Any ideas for Lee?

Another “Do you remember?” comes from Sue Haberstroh, who writes, “Does anyone remember the fine restaurant called The Spinning Wheel which was across from the now YWCA? My grandmother and aunt took me there as a child and I really remember the waiter with his towel over his arm bringing finger bowls around for us to clean our hands. As I remember it had a spinning wheel outside and mostly white on the outside. Truly an experience.”

Jason Gross recalled this one. “When you had the matchbook cover link a while ago, one of the covers available was for ‘Bierman’s’ restaurant. In the ’50s this was the only real restaurant my parents took me. When it closed, then we went to Tremont. I saw Tremont in your lists but with no linked data but not Bierman’s. Does anybody remember anything about them or just where they were located?”

And speaking of the Tremont…

Jeff K. writes, “I am remodeling my kitchen and found a Courtesy Dinner Card from the Tremont Boathouse 650 Cleveland Ave. York, Pa. What can you tell me about this place?” Any ideas for Jeff?

Of Bud’s, Matt Pettigrew writes, “There was a miniature golf course connected to Bud’s and run by, I think, Bud’s brother Ray. For a long time I held the course record, but that was because one of my high school friends worked there and used to let us play as much as we wanted to for free. I won’t mention my friend’s name since I’m quite sure Ray didn’t know about the free games.”

Melanie says, “We used to eat a lot at Bd Markey’s family restaurant, they had some good food and it was just in general a nice place to eat, everyone was friendly. My mom actually had my high school graduation party there. Every time I drive by there I still think of Bud Markey’s. Thanks for the memories.”

And Wayne Breighner of Red Lion notes, “The original business Fitz Brothers Tropical Treat was a seasonal operation and only retailed frozen custard, milkshakes and sundaes. The seating area was picnic tables. Business was closed during winter months. Harry Markey aka Bud managed Fitz Bros. operation prior to acquiring the business. Mr. Markey’s sister was married to Clair Fitz, one of the owners. Bud’s Drive-In was year round and expanded to also serve hot and cold sandwiches and fries. The Tropical Treat name was dropped and the seating area was weatherized allowing year round operations. I started working there evenings and weekends, circa 1960. Interstate 83 was under construction from the York Hospital to the Md. line. There was some thinking that businesses along the old trail would not be profitable once the interstate became operational. Bud’s Drive-In was famous for its Budburger (a Big Mac knock-off although nearest ‘Golden Arches’ was in Cumberland County) and the Bud-mobile, a car with a giant Budburger replica on its roof. The menu featured 3 flavors of soft-serve ice cream; chocolate-vanilla-strawberry, barbecue of pork, beef, ham and hamburg. The Markeys were involved in day to day operations, and were noted for good food at reasonable prices. Bud and his brother Ray Markey were involved in drag racing. They were the recipients of many trophies.”

Gary Brown writes, “Does anyone remember the White Swan Drive-in on Route 30 between Route 116 and 616? It was at the former Lincolnway Diner and later a BBQ Pit. It is now a vacant lot. I remember driving to York for the car hop service before Hanover’s Tropical Treat Drive-in was built in the 1950s. I also remember the White Swan building with its outdoor barbecue Pit.”

Greg Moul Sr. wrote and said, “Now, about Hickey’s Drive-In. I remember it well. Good food. It was one of the newer drive-ins in the area. It wasn’t as old as Avalong, North Pole or White Swan. I think it was built in the ’60s. It was across from the Springetts Fire House. It’s funny, Fire Chief Jay VanPelt and I were just talking about Hickey’s just (recently). We both grew up in the Fayfield area of East York. The drive up part was in the back. That part was torn down after Hickey’s closed. The last business that was in the kitchen part was a Chinese restaurant. That part burned some years ago, and the rest of the building torn down. Hickey’s stood between where Dairy Queen and Rita’s is now.”

And Renay Wolf says, “A reader asked about a restaurant by the name of Hickey’s that was located across from the Springetts Fire Hall in East York. I remember that place well. It was located behind what was once the East York Post Office. Just what is in that same building now, I am not sure but Hickey’s was a thriving drive-in sort of reminiscent of Avalong in that you could order food and drink from your car and a waiter/waitress would bring it out to you. They had great fish sandwiches, fries and hamburgers. I made it a weekly stop after work on Fridays during the time my husband was in the Army. The food was much better than at Gino Marchetti’s burger joint that was located where Perkins Restaurant is now. Sorry to say, I don’t have any pictures of Hickey’s.”

And finally, Karen Strine wrote, “I have a memory about Hickey’s Drive-In… I loved their lunch counter. It was laminated and under that were stones. I thought that was so cool. The laminate was very thick and always so shiny. I remember the trays not fitting snugly on the car window in the drive-in part. My family lived near Hickey’s and I could walk there. Next to it was Red’s Phillip 66 gas station and both places, from the memory of a child, always seemed busy.”

Many thanks to ALL who shared their restaurant memories!